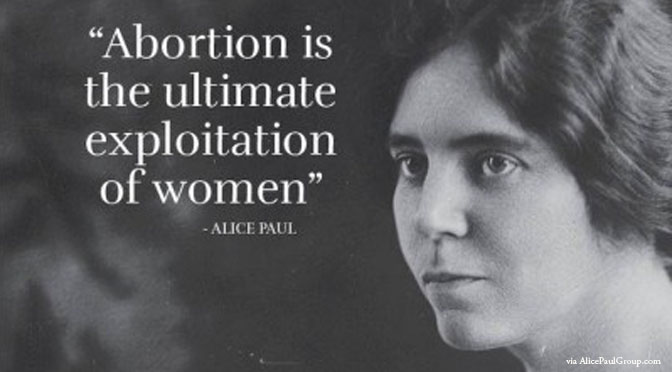 You many be wondering, “what is a pro-life feminist anyway?” Fair question. As a young woman, when I heard the word “feminist” I cringed a little. It sounds harsh and angry. It wasn’t until my mid 20s that I realized that I had always been a feminist and I was raised by a strong father who taught me, my mother, and my two sisters to be healthy and joyful feminists for our generations. I can say for certain that at age seven, I was walking out an active pro-life feminist life.

The definition of a feminist is “the belief that men and women should have equal rights and opportunities; or an organized activity in support of women’s rights and interests.” Simply stated, a pro-life feminist is “a woman who believes that abortion has served to hurt women and has never benefitted them.” Besides the simple and stark fact that abortion kills tiny preborn women in the womb, it has ruthlessly stripped women of their joy, confidence, and self-worth. When a life within them is not valued, the conclusion must then be that they themselves must not be valuable.

This being the final week of Women’s History Month, I’d like to introduce you to some pro-life feminists from the time of “women’s right to vote” up to the modern pro-life feminists of our time and generation. Some women you’ll recognize immediately, and some you’ll meet for the first time. Born among men of her time such, as Ralph Waldo Emerson, Nathaniel Hawthorne, and Henry David Thoreau, we know Louisa May Alcott best by her famous novel, Little Women. She was not only a pro-life feminist, but also a passionate abolitionist.

As a 10-year-old, Alcott had written, “Father asked us what was God’s noblest work. Anna said men but I said babies. Men are often bad; babies never are.”

In a response to the editor of the Boston Daily Journal in 1883 regarding confusion among opponents to the true cause of suffrage, she wrote:

“The assertion that suffragists do not care for children and prefer notoriety to the joys of maternity is so fully contradicted by the lives of the women who are trying to make the world a safer place for both sons and daughters, that no defense is needed. Having spent my own life from fifteen to fifty, loving and laboring for children, as teacher, nurse, storyteller and guardian, I know whereof I speak.”

The original feminists, the suffragists, were pro-life in every sense of the word. Another feminist and abolitionist who fought hard and victoriously in the women’s suffrage movement, Susan B. Anthony is best known for fighting for women’s right to vote. The Nineteenth Amendment, which guarantees the right of women to vote, was famously known as the Susan B. Anthony Amendment. She passionately wrote pro-life speeches, explaining the treachery of abortion and postnatal infanticide. In one of her most acclaimed speeches, she implored her audience with these powerful words:

“Guilty? Yes, no matter what the motive, love of ease, or a desire to save from suffering the unborn innocent, the woman is awfully guilty who commits the deed. It will burden her conscience in life, it will burden her soul in death; but oh! thrice guilty is he who, for selfish gratification, heedless of her prayers, indifferent to her fate, drove her to the desperation which impels her to the crime.” We all know her as an incredible woman of faith who grew famous for her tireless efforts towards ministering to lepers, homeless, and the poorest of the poor. Her legacy was to love all people and value their life more than her own. She spoke to inspire others to love the forgotten ones and the ones cast aside by society. She is one of the strongest examples of a pro-life feminist.

Her most notable awards were The Nobel Peace Prize in 1979 and the Medal of Freedom from the United States in 1985. She spoke out boldly about her opposition to abortion and the protection of the innocent unborn. Here are a few of her better known quotes regarding the subject of abortion:

“Abortion kills twice. It kills the body of the baby and it kills the conscience of the mother. Abortion is profoundly anti-women. Three quarters of its victims are women: Half the babies and all the mothers.”

“America needs no words from me to see how your decision in Roe v. Wade has deformed a great nation. The so-called right to abortion has pitted mothers against their children and women against men. It has shown violence and discord at the heart of the most intimate human relationships. It has aggravated the derogation of the father’s role in an increasingly fatherless society. It has portrayed the greatest of gifts –a child– as a competitor, an intrusion, and an inconvenience. It has nominally accorded mothers unfettered dominion over the independent lives of their physically dependent sons and daughters. And in granting this unconscionable power, it has exposed many women to unjust and selfish demands from their husbands or other sexual partners. Human rights are not a privilege conferred by government. They are every human being’s entitlement by virtue of his humanity. The right to life does not depend, and must not be declared to be contingent, on the pleasure of anyone else, not even a parent or a sovereign.” After King underwent two abortions at Planned Parenthood, she understood the lasting detriment of that choice, explaining that she was deceived by the abortion giant. King wants other women to know that minorities are targeted by Planned Parenthood, and their strategy is to lock in on minority communities, neighborhoods, and cities. She is outspoken on the right to life and the mistake she made in choosing abortion.

One of her most renown quotes on abortion compares this injustice to the injustice of racism:

“Abortion and racism are both symptoms of a fundamental human error. The error is thinking that when someone stands in the way of our wants, we can justify getting that person out of our lives. Abortion and racism stem from the same poisonous root, selfishness.”

In conclusion, here are some other well-known women in our generation who take a stand for life every day. They aren’t afraid of backlash on their careers or popularity; instead, they bravely speak the truth and refuse to be silenced.

“It’s not good for women to go through the procedure (abortion) and have something living sucked out of their bodies. It belittles women. Even though some women say, ‘Oh, I don’t mind to have one,’ every time a woman has an abortion, it just crushes her self-esteem smaller and smaller and smaller.”

“If you’re pregnant, don’t compound the problem by seeking an abortion. Getting an abortion doesn’t solve anything. You are much better off in that situation to put the baby up for adoption because you might be able to help a couple that can’t have children.”

“I find it impossible to subscribe to a philosophy that believes that the destruction of human life is a legitimate solution to a problem that is mostly social, economic, and psychological. In reality, most women ‘choose’ abortion because they believe they have no other choice.”

“Is it all right for the government to allow the murder of an innocent human being? The evidence I see tells me the unborn is a human being. From the moment of conception, a new life comes into being with a complete genetic blueprint. The sex is determined. The blood type is determined…the moment that I learned that the unborn was a human being, not part of the woman’s body but its own individual human being, I have no choice but to defend the most vulnerable among us.”