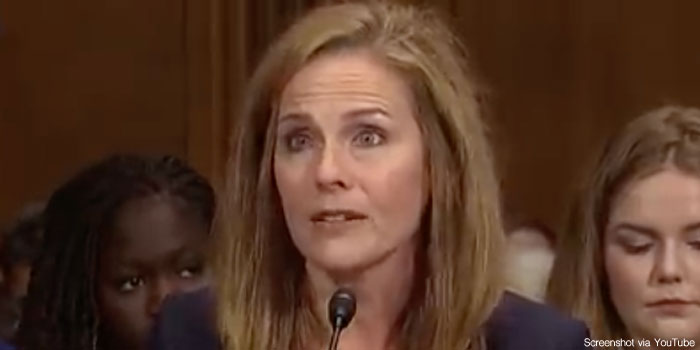 Last month, Anthony Kennedy announced his retirement from the Supreme Court. For many pro-lifers, this new opening on the Supreme Court could be a chance to appoint another pro-life justice, and become one step closer to finally overturning Roe v. Wade. There is good reason for this optimism, too; President Trump has repeatedly promised to only nominate pro-life justices. His official decision will be announced Monday, July 9th; currently, he is rumored to be considering six people for the nomination, with three on his shortlist. One of the people on his shortlist is Amy Coney Barrett, a woman with an extremely impressive background, as readers can see below:

2. She notably clerked for Antonin Scalia, the brilliant Supreme Court justice who passed away in 2016.

3. She was named a law professor at Notre Dame in 2010, after spending a year as a law and economics fellow at George Washington University.

4. She currently is the Diane and M.O. Miller II Research Chair of Law, and received a “distinguished professor of the year” award twice, in 2010 and 2016.

5. She’s a sitting judge on the United States Court of Appeals for the Seventh Circuit.

6. In addition to her already notable accomplishments and career, Barrett is a married mother of seven, one child with special needs, and two of whom were adopted from Haiti.

7. She is a pro-life Catholic — and shockingly, her religious beliefs caused controversy after Trump nominated her to the Circuit Court.

Barrett was nominated to the Circuit Court in May of 2017, and a Senate Judiciary Hearing was held in September. During the hearing, Barrett’s religious beliefs repeatedly came under fire. Senator Dianne Feinstein expressed fear that Barrett’s Catholic faith would lead her to overturn Roe v. Wade. “Why is it that so many of us on this side have this very uncomfortable feeling that — you know, dogma and law are two different things,” Feinstein said. “And I think whatever a religion is, it has its own dogma. The law is totally different. And I think in your case, professor, when you read your speeches, the conclusion one draws is that the dogma lives loudly within you, and that’s of concern when you come to big issues that large numbers of people have fought for years in this country.”

Applying a religious test to someone is, of course, unconstitutional. Aside from this, a letter signed by her colleagues at Notre Dame, says she would be “an exceptional federal judge.” Despite their diverse political views, they all agreed that Barrett “is a brilliant teacher and scholar, and a warm and generous colleague” and “possesses in abundance all of the other qualities that shape extraordinary jurists: discipline, intellect, wisdom, impeccable temperament, and above all, fundamental decency and humanity.”

Barrett, according to many pro-lifers, would be a stellar choice to nominate to the Supreme Court. There are reportedly two other individuals, Appeals Court Judge Brett Kavanaugh and United States Circuit Court Judge Raymond Kethledge, being seriously considered, although some reports also note that the president may have spoken with Senator Mike Lee (R-Utah) in this regard.