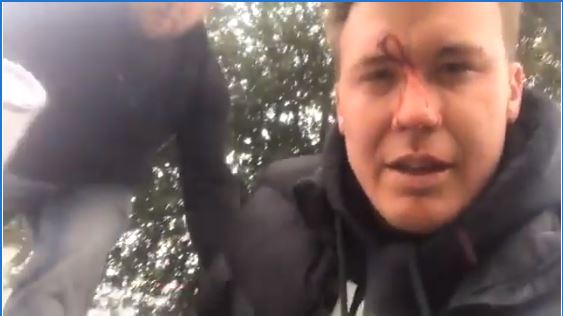 A pro-life activist was assaulted on Friday outside of a Whole Woman’s Health facility in Fort Worth, Texas. Whole Woman’s Health is a chain of abortion facilities notorious to pro-lifers for violating health standards. The victim, “Abortion Clinic LIVE” founder Ryan Roberts, was punched multiple times by a man outside the facility for saying, “Jesus loves you.”

“I knew it was going to happen eventually,” Roberts told Faithwire. “I told myself if that happened, I was going to take it. Like Jesus. And I did.”

Roberts and Pastor Mike Dickson, director of Right to Life of East Texas, were outside of the abortion facility attempting to save lives from abortion when a man in a truck asked Roberts if he wanted to die, and if he wanted his family to die. After initially backing away, the man exited the truck and punched Roberts several times. Roberts collected himself as blood spurted from his face. He then continued in his mission to save lives.

“Jesus loves you so much,” he told women and men entering the abortion facility. “I just got assaulted out here by a random man who drove by. You should see my face. I am covered in blood. But it’s okay. Because Jesus was crucified. He was beaten and bloodied. For you. Because He loves you. And He loves that little baby too!”

Roberts was likely not shocked to have been attacked because abortion advocates have a history of violence against pro-lifers. In the last few months alone, pro-lifers have been punched, roundhouse kicked, had metal carts shoved at them, and received rape and death threats. The altercation involving Roberts was captured on video.

“What you see in the video is our entire interaction with this man,” Dickson told Faithwire. “Yet that interaction led to that man stopping in the middle of the road, getting out of his car, and punching Ryan Roberts several times in the face. All for sharing about Jesus Christ.”

From 2007 to 2014, Whole Woman’s Health locations in Texas were cited for multiple health code violations, including tossing bloody medical waste and private patient information into the dumpster, failing to have licensed nursing staff at the facility, “numerous rusty spots on the suction machine used on the patient” for an abortion, and failure to properly sterilize medical equipment.

After visiting the emergency room, Roberts announced that his pro-life efforts had proven worthwhile, as they had saved a baby. Later in the day, he shared a photo on Facebook of himself recovering at home with his daughter.

According to Faithwire, Fort Worth police have identified the attacker as a man who was recently released from psychiatric care in a hospital, and authorities are investigating the incident as a possible religious hate crime.