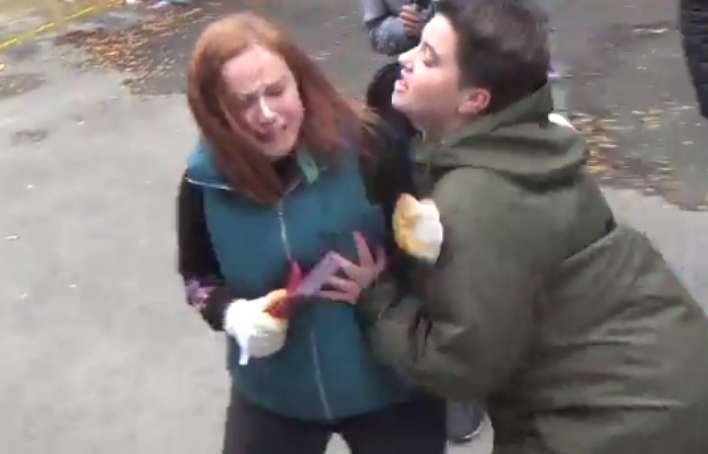 UPDATE, 5/3/19: This week, Gabriela Skwarko pled guilty to her charges of assault, and assault with a weapon after she attacked pro-life students Katie Somers and Blaise Alleyne. Skwarko apologized in court, and Somers said that she accepts her apology and thanked her for it. Skwarko’s sentence includes a conditional discharge and 18 months probation.

UPDATE, 10/29/18: According to Canada’s Global News, 23-year-old Gabriela Skwarko turned herself in to police on Friday, October 26, 2018, and “has been charged with assault and assault with a weapon.” Skwarko is reportedly “listed as an assistant at Ryerson’s Social Innovation Office on its website.” The university, however, would not comment on Skwarko’s current employment or on any possible academic penalties. The head of the school’s Reproductive Justice Collective also refused to comment on Skwarko’s arrest.

10/11/18: Last week, a video set off international shockwaves. A pro-abortion man was filmed attacking a woman in Canada simply because she was pro-life, vandalizing pro-lifers’ signs and then hitting her in the shoulder with a roundhouse kick. That man, Jordan Hunt, has since been arrested, but now, shockingly, police are investigating another violent attack directed towards pro-lifers in Canada.

The incident happened on October 1, 2018, one day after Hunt attacked pro-lifer Marie-Claire Bissonnette. Members of pro-life group Toronto Against Abortion can be seen in a video posted of the incident civilly discussing abortion with counter protesters at Ryerson University. Then, a person is seen attacking pro-lifer Blaise Alleyne, kicking away the sign he was holding. The attacker then directed violence towards Katie Somers, reaching into her backpack, pulling something out, and smashing it on the ground. Somers’ attacker then pushed her as she screamed and tried to get away. After people intervened, Somers can be heard in the background sobbing:

“We didn’t see her coming,” Somers said in an interview with Global News. “She kicked our signs, shoved them down. They fell down my leg, injuring me… And then I tried to run away, while she picked up a metal dolly and threw it at me and then proceeded to shove me, wrestle me around by my backpack and try to get me to fight her.”

Toronto Against Abortion alleges that the attacker is Gabriela (“Gabby”) Skwarko, an assistant at Ryerson University’s Social Innovation Office and a member of the Ryerson Reproductive Justice Collective. Somers said they are pressing charges, and will also be launching a civil case against her.

READ: Why I’m a pro-life activist

As for the Reproductive Justice Collective, they claimed that they have been the recipients of violence from pro-lifers. “They have assaulted us multiple times and giving into their view point and the way they’ve swung this is problematic and bad,” Olson Crow, the co-founder of the pro-abortion activist group, said. He declined to give any evidence whatsoever, though, that any member of the group had ever been attacked by a pro-lifer.

In typical fashion, the abortion industry and its supporters have remained silent as these instances of despicable violence have increased.

Editor’s note, 5/3/19: The title has been changed to reflect updates on this case.