The National Organization for Women (NOW) appears to be the latest pro-abortion group accused of racism at the highest levels of leadership. Abortion giant Planned Parenthood has dealt with numerous accusations of racism in recent weeks, as has NARAL Pro-Choice America.

NOW, founded in 1966 by feminist icon Betty Friedan, fractured after two pro-abortion men, Lawrence Lader and Bernard Nathanson, convinced Friedan to add abortion rights to the organization’s platform. Lader maintained that in order for abortion to be legalized, the eugenic agenda must be hidden from the public, and “women… and some Blacks” must be kept “out front” once recruited to the cause.

Recently, the Daily Beast reporter Emily Shugerman conducted interviews with nearly a dozen members and employees of NOW who claim that women of color were being “heckled, silenced, or openly disparaged at NOW meetings and offices.” As a result, 26 of 35 NOW state chapters signed a letter demanding the resignation of NOW’s president, Toni Van Pelt.

In addition, nine of the 15 national board members came forward while the California chapter of NOW held a series of video conferences calling out NOW’s “systemic racism.”

“Instead of acting swiftly to condemn and weed out racism and transphobia within NOW, much of the organization has worked to protect and defend this leadership,” CA executive board members wrote, according to the Daily Beast. “It is now clear that the problems within NOW are systemic and that the institution as a whole is unwilling to do the work to change.” 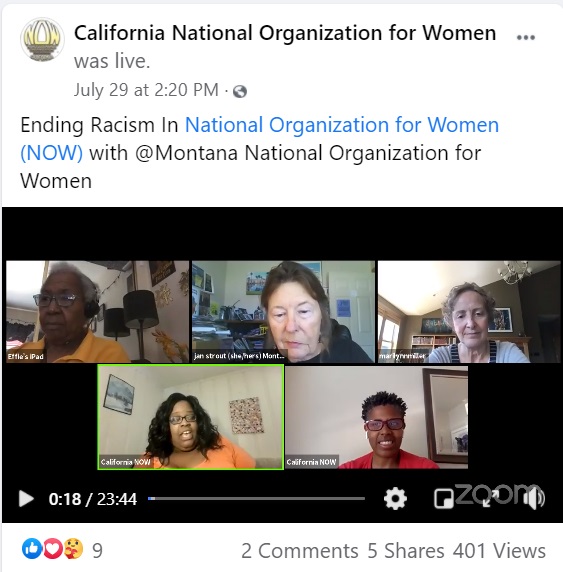 The pressure eventually led to Van Pelt submitting her resignation earlier this month, citing health issues as her reason for stepping down. She will be replaced by Vice President Christian Nunes, an African American woman who told the Daily Beast that she has “been the subject of discrimination and tokenism” at NOW. Nunes alleged that Van Pelt was “disrespecting and ignoring women of color, and making racially insensitive statements.”

“Van Pelt’s resignation comes on the heels of an internal investigation into allegations of racism and a toxic work environment at the storied feminist group,” the Daily Beast wrote.

In a letter, the Nevada NOW board stated, “The damage that you have inflicted upon our organization with your repeated racist behavior and lack of self-awareness leads us to the conclusion that we no longer hold confidence in the integrity of your leadership.”

READ: How the push for ‘abortion rights’ splintered the women’s movement

Multiple “reproductive rights” organizations like Planned Parenthood have been recently called out for years of racist or misogynistic conduct. According to the online blog Lily.com, among these groups are the American Association of University Women (AAUW) and the Feminist Majority Foundation (FMF) whom the blog claims “… have not made room for women of color, especially black women.” Buzzfeed News recently exposed NARAL Pro-Choice America, which was founded by men who believed in eugenics, after their staffers publicly accused the organization of racism. Despite the allegations, NARAL’s president Ilyse Hogue remains in her position.

In a recent tweet, ReproJobs called the allegations among these groups “pervasive.” 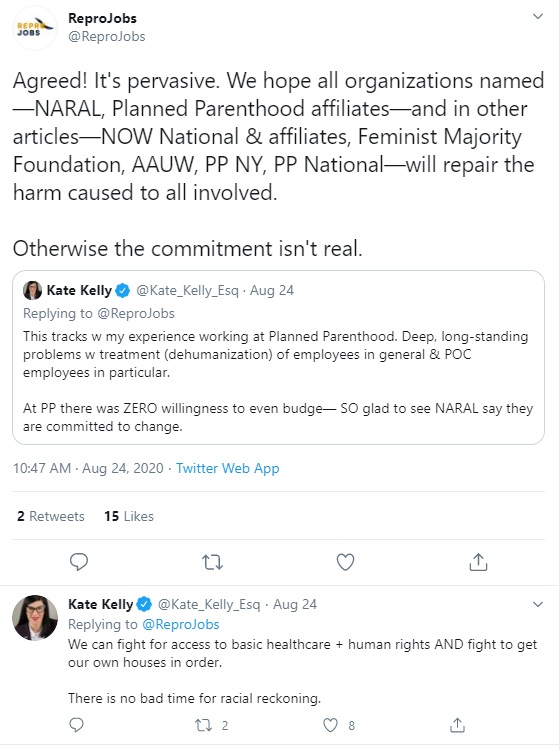 The Guttmacher Institute and the National Abortion Federation were previously called out by staffers for allegedly mishandling allegations of sexual harassment. And when abortionist Daniel Grossman openly admitted that organizations which he has helped to lead have limited “the success of Black and Brown scholars and staff,” there were no demands for his resignation. 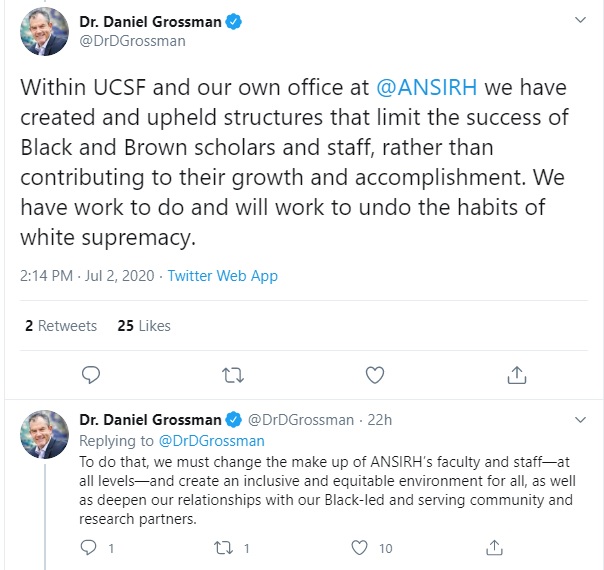 “For years people working both inside and outside the National Organization for Women (NOW) have acknowledged that the majority of NOW’s leadership and membership is composed of older white women. This leadership doesn’t always work in partnership with traditionally marginalized and underserved populations including: black, brown, queer, transgender, non-binary, immigrant, and disabled people. In the last several weeks there have been multiple national publications where women of color have shared their accounts of racist behavior and actions by the current President of NOW, Toni Van Pelt,” NOW’s Florida chapter wrote in its letter.

“A Daily Beast investigation published in June revealed allegations of racism reaching the highest levels of the organization. Interviews and internal documents showed that Van Pelt was accused of racist behavior by more than 15 former NOW staffers and interns and that her former vice president, Gilda Yazzie, had filed a racial discrimination lawsuit against the organization. Among other things, Van Pelt was accused of telling staffers that she only chose Yazzie, who is Native American, as her running mate because she needed a woman of color to win,” the Daily Beast noted.

“This organization has a problem of racism and ageism and [they] don’t know how to deal with it,” Monica Weeks, former NOW national board member, told The Daily Beast. “I thought when I was coming into the feminist movement I was joining this big sisterhood,” she added, “and that was the biggest disappointment in my life.”