Feminist icon Betty Friedan, a founding leader of the National Organization for Women (NOW), which bills itself as the first national organization to endorse the legalization of abortion, admitted that two pro-abortion men strongly pushed NOW to use its influence to legalize abortion. Friedan, who falsely claimed she “started the Woman’s Movement,” was once granted the “Humanist of the Year” award. She authored the book, “The Feminine Mystique,” which didn’t even mention abortion in its first publication. Friedan has been quoted as saying, “Ideologically, I was never for abortion. Motherhood is a value to me, and even today abortion is not.”

But the NOW founder was eventually convinced — by these two pro-abortion men — to push abortion as part of NOW’s official platform.

Friedan’s admission to NARAL supporters was captured in CSPAN’s 1989 video, “Who Decides? Political Action for Pro-Choice.” She referred to the 1960s pro-choice push as the “second American evolution of women.”

“First of all, the word ‘abortion’ was almost never heard in the early 60s. It was never used in the newspapers,” Friedan told the group. “There were many founders of NOW… and they persuaded me this was too controversial to take on, it might split the burgeoning women’s movement,” Friedan stated.

She added that at the time, the issue was too controversial even for Planned Parenthood. 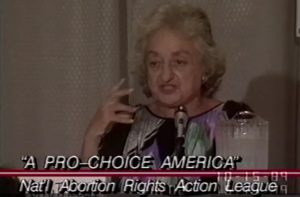 READ: A look at the past, present, and future of pro-life feminism

Labeling her fight the “NAACP for Women,” Friedan confessed that it was primarily two pro-abortion men who convinced her to use NOW to promote abortion. “I remember that there were some men — doctors, lawyers — that had been trying to reform these criminal abortion laws. And they got a sense somehow that the women’s movement might make everything different,” she said. “They had gotten nowhere but they had a sense. So, they kept nagging at me, to NOW, to do something….”

“When it was clear that NOW wasn’t going to [promote it] in those first years,” Friedan says the men came to her pleading for help. These men were Lawrence Lader and Dr. Bernard Nathanson (a founder of NARAL who later became pro-life). Because of her book, Friedan had “a little bit of fame,” and “these guys, they loved me, because I was helping to give them some visibility.”

Friedan helped establish NARAL, (known then as the National Association for the Repeal of Abortion Laws) at the First National Conference on Abortion Laws held in Chicago in 1969. She admitted that at NARAL’s founding, few women attended: “I have to tell you. It wasn’t very large and my hunch is that women were not the majority of people even at it.”

In fact, according to Harvard University Library, two of NARAL’s three member pre-formation planning committee were men: Garrett Hardin and Lawrence Lader. (Lader met Planned Parenthood founder Margaret Sanger in 1953, and in 1955, he published a biography on her, later co-authoring another account of Sanger.)

In her book, “Subverted,” author Sue Ellen Browder described Lader as being adamant that the women’s movement was key to decriminalizing abortion. “We’ve got to keep the women out front… and some Blacks,” she quotes Lader as telling Nathanson at a NARAL strategy meeting. On a 1967 trip the men took together, Lader said, “If we’re going to move abortion out of the books and into the streets, we’re going to have to recruit the feminists…. Friedan has got to put her troops into this thing – while she still has control of them.”

Browder says Nathanson originally objected to the idea of using feminists to further their movement but later proclaimed, “I was dead wrong.” 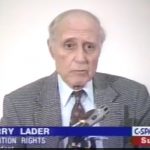 READ: An actress, a singer, and a supermodel show that true feminists are pro-life

In his book, “Abortion II,” Lader recounted his interaction with Friedan: “We had known each other for years, and while she was writing Mystique, I occasionally suggested that all feminist demands hinged on contraception and abortion and a woman’s control over her own body and procreation.” He also wrote that Friedan was hesitant, fearing it would “split[] off Catholics and conservative professionals.”

Lader eventually convinced Friedan to market abortion as a way women could “control their bodies,” crediting Margaret Sanger, who said, “No woman can call herself free who does not own and control her own body.”

Over time, Friedan saw problems with her male-created feminism, and noted that her movement’s failure “was our blind spot about the family.” In promoting her book, “Second Stage,” Friedan called for her movement to “stop overemphasizing abortion rights and reaffirm the importance of family.” But the damage was done.

In 1981, Friedan decried the “lack of reverence for life and the mysteries of conception and birth” in pro-choice feminism:

Maybe there was something slightly off in the way we handled abortion. Such slogans as ”free abortion on demand” had connotations of sexual permissiveness, affronting not only the moral values of conservatives but implying a certain lack of reverence for life and the mysteries of conception and birth.

After all, why do feminists seem to be fighting ”for abortion” against women who say they are fighting for ”the right to life”? How can we fight the real battle in such terms? Who is really for abortion? That is like being for mastectomy…

In contrast to NOW, early feminist leaders like Susan B. Anthony referred to abortion as “child murder” and viewed it as a means of exploiting both women and children. They, unlike Friedan, demonstrated that true feminism was pro-motherhood, pro-woman, and pro-child.