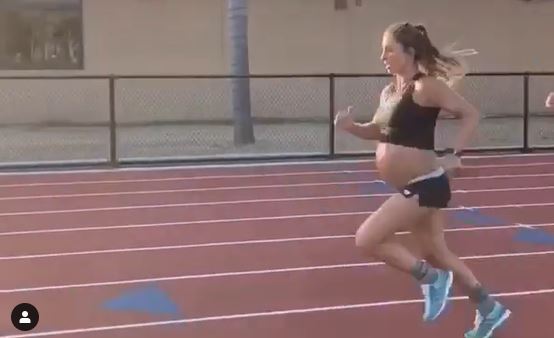 Makenna Myler, 28, is wowing people across the world after a video of her running went viral. A TikTok filmed by her husband, Mike, showed Myler running a mile in less than six minutes — 5:25, to be exact. While that’s an impressive feat for most people as it is, what has made people so wowed is that Myler did it while nine months pregnant.

Myler has kept up with her running regimen throughout her pregnancy, running five to six times a week. “I cut back my mileage a lot and have been a lot slower, but I have been very particular with my strength training to make sure my pelvic shift and added weight didn’t/doesn’t cause any injury,” she told Buzzfeed News. Concerned that her running would taper off as she got further along in the pregnancy, she and her husband made a bet to keep her motivated. “[H]e said he would give me $100 if I could break 8 minutes doing the mile at 9 months pregnant,” she said.

Someone check the Guinness stats. My wife is an absolute champion. #nikematernity

As Myler’s insanely impressive video shows, she not only broke eight minutes — she broke six. And all the while, her doctors were cheering her on. “My first doctor was all about it because he had dealt with elite athletes before,” she said. “My second doctor asked me to be a bit more cautious because he didn’t understand my background — and that was before any ultrasound. After ultrasounds showed a perfectly healthy baby, he’s been more supportive, but emphasizes the importance of getting enough calories (which, if he knew me better, he would know that’s not a problem).”

Myler also said keeping up with her running has helped her feel capable, even as her body changed. “Running has been a big outlet for me in that way,” she told Buzzfeed. “Running during pregnancy has been a beautiful process of accepting effort and patience, not forcing anything, and letting go of pace and forced mileage.”

“It’s funny, I kept waiting and waiting for the day when I would just be done or my body would break, but that day never came,” she said. “So yeah, I’ll probably still be running by next Monday.” Her due date was Monday.

It’s really something else when a human hangs out in your belly. Absolutely loving and welcoming all growth. Turns out I still never wear a shirt during exercise. Crossing our fingers for Halloween. Stay tuned

Despite discrimination from athletic companies, such as Nike, many professional athletes refuse to let pregnancy slow them down, or hinder their careers. Alysia Montaño, a six-time US National Champion, World Championship Medalist, and Olympian, has made headlines for repeatedly competing while visibly pregnant. Olympic beach volleyball superstar Kerri Walsh Jennings won a gold medal while pregnant, and Serena Williams won a Grand Slam tournament when she was two months pregnant.

Montaño in particular has been vocal about the discrimination athletes receive when they are pregnant or parenting. “The more human we can be, the more relatable we can be,” she said in a previous interview. “I love running fast, of course. But my purpose is greater than how fast I can run.”