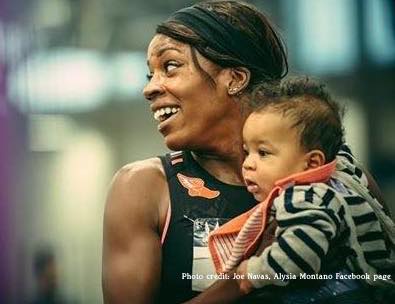 Alysia Montano is an Olympic runner who has been amazingly successful at her sport. She is a seven-time United States champion, a two-time American record holder, and she’s won three Olympic medals. Montano is also known for always running with flowers in her hair, a way she chooses to showcase her femininity. In 2014, she competed in the USATF’s USA Outdoor Track and Field Championships while eight months pregnant. She finished in last, but her goal was not to win. Montano wanted to advocate for women to stay fit during their pregnancies. After giving birth to her daughter, Linnea, in August of 2014, she began making her career comeback.

Montano and her husband wanted another baby, but put off those plans after the Zika outbreak in Brazil — during the Olympics in Rio de Janeiro — made pregnancy unsafe for her. But after an injury took her out of Olympic contention, Montano and her husband decided to move forward with their plans for another baby. She’s now five months pregnant with her second child, and she’s still competing.

Sporting a Wonder Woman top and her signature flowers in her hair, Montano competed in the 2017 USATF Outdoor Championships, her baby bump on display.

About last night… 2017 USA Nationals with baby #2 at 5months pregnant. I have some pretty awesome maternity photos from both pregnancies ????#Wonderwoman #ShesAllOFUS #beyourjourney

She finished in 30th overall, not good enough to earn a spot in the semifinals, but Montano hopes that her running will continue to inspire other female athletes. “This isn’t to pressure women to run during pregnancy. That’s not the point at all,” Montano explained. “We’re just different and that’s the point.”

You own it. You define it. It’s no one else’s but yours. Be your journey. #FlyingFlower pic.twitter.com/wmOmGsDPEn

My mission as a mother, as a daughter, as a sister, as a friend, and as a human is to always fight for good and th… https://t.co/FCW5q7DPm5 pic.twitter.com/8uZmrBZKYa

Earlier this month, five-time Olympic medalist Sanya Richards-Ross opened up about her decision to have an abortion just weeks before she was due to compete in the 2008 Olympics in Beijing. Richards-Ross felt at the time that she could not give up the Olympics, but now deeply regrets her decision. She wanted to share her story so that other female athletes — who she says frequently find themselves in similar positions — will know they are not alone. Hopefully, women like Montano and Richards-Ross can, together, blaze a new path that demands better for female athletes than abortion.