Planned Parenthood’s president has announced the hiring of new senior staffers following news that high ranking employees resigned their positions with the abortion corporation recently exposed for aiding child sexual predators and discriminating against pregnant staffers. The largest vendor of abortions in the nation is attempting to remake themselves into a health care agency. However, recent statements made by their newly appointed president, Dr. Leana Wen, reveal that Planned Parenthood’s “core mission” — Wen’s words — is, in fact, abortion. Planned Parenthood has doubled down, vowing to make expanding abortion a major focus in 2109. But, despite the abortion push, Planned Parenthood’s latest hires appear to have political savvy, a talent the organization seeks out to keep itself well funded.

Leana Wen made the announcement last week on her Twitter page, noting that the abortion corporation has hired Melanie Roussell Newman, who will serve as Senior Vice President of Communications and Culture and Marisa Raphael, who will be the organization’s Vice President of Public Health and Strategic Operations. Both positions appear to be newly created. 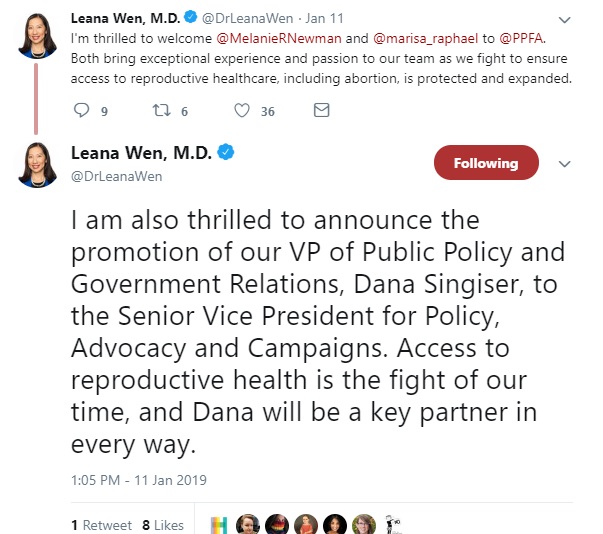 According to her LinkedIn page, Melanie R. Newman is currently the Chief Public Engagement and Communications Strategist at NAACP Legal Defense and Educational Fund, Inc. She also served as the senior advisor and spokeswoman for U.S. Attorney General Loretta Lynch under the Obama Administration. And, in 2014, Newman served as “Senior White House spokesperson… managing all communications… related the Office of Management and Budget.”

OMB serves the President of the United States in overseeing the implementation of his vision across the Executive Branch. Experience in this area could be key for fighting changes to Title X and other areas of defunding. Experience in the Department of Justice could help Planned Parenthood respond to legal matters and investigations into Planned Parenthood’s aborted baby body parts scheme, and the alleged sale of fetal tissue, exposed by the Center for Medical Progress. 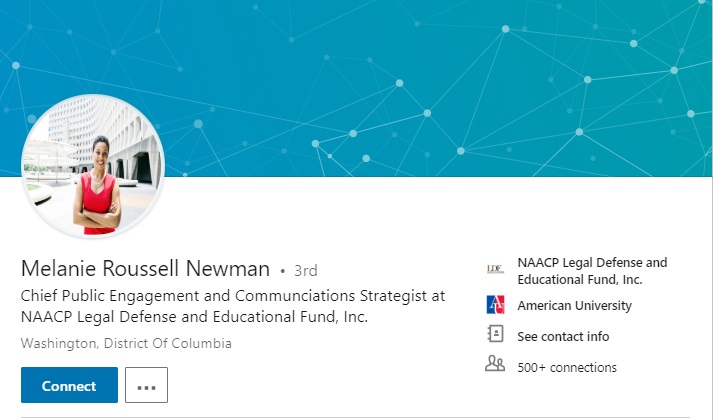 According to a job description posted on LinkedIn, Newman will report jointly to Wen and Planned Parenthood’s Chief of Staff to develop and execute a “proactive national communications and media strategy that advances the organization’s mission and brand.” The mission is, as Wen herself said, abortion:

The Senior Vice President is expected to enhance Planned Parenthood’s visibility, image and influence through effective media and marketing strategies and to craft the organization’s strategy and overall national message to engage the media, decision makers, the general public, funders, and patients. A major component of the Senior Vice President’s work is working with the new President to fulfill the three-pillar vision to “provide, protect, and expand” Planned Parenthood’s impact and to reposition Planned Parenthood for this critical juncture in history.

Marisa Raphael is the former Deputy Commissioner at the New York City Department of Health and Mental Hygiene for Emergency Preparedness & Response.

In addition, Wen announced “[t]he promotion of our VP of Public Policy and Government Relations, Dana Singiser, to the Senior Vice President for Policy.” Singiser is deeply entrenched in Democrat party politics. In October, Live Action News reported Planned Parenthood’s creation of a new position to push for activist, pro-abortion judges in the hopes that abortion without restrictions will be upheld at any cost. That now-filled position (Director, Judicial Nominations) would have reported to Dana Singiser, who was added to Planned Parenthood Federation of America (PPFA)’s team while working in the Obama White House in 2011.

It is unclear what Singiser’s role will be in this new position.

Additional positions posted by PPFA include an opening for an Associate Director, Federal Advocacy Communications, who will “work closely with the Government Relations and Campaigns departments to create and execute communications and media strategies around the organization’s Congressional and federal priorities, including access to care at Planned Parenthood, access to safe, legal abortion… strategically respond to breaking news… and connect the dots between Congressional policy and electoral work in the 2018 and 2020 elections.” 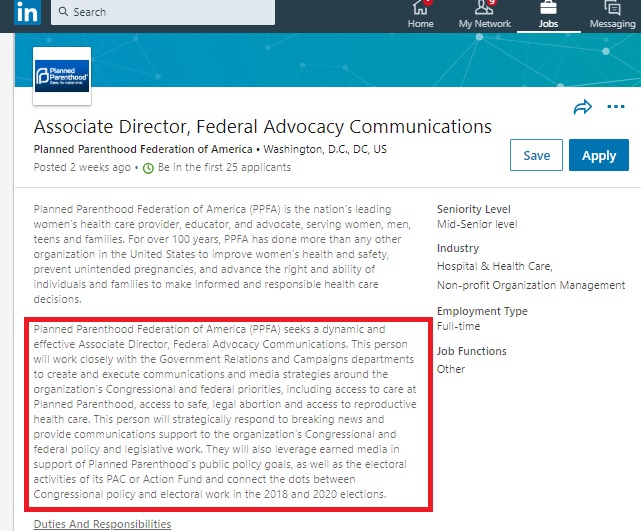 Planned Parenthood aborts nearly 900 children a day while receiving half a billion in taxpayer dollars each year. The new positions point to a shakeup in an organization plagued by complaints from staffers that Planned Parenthood intimidates employees, prioritizes profit over patients, and is a toxic environment to work in.