This is one of the most important public health success stories in history, and it would not have been possible without the life changing, and life saving work of Planned Parenthood.

After 12 years, I will be stepping down from my position as president of Planned Parenthood this year. pic.twitter.com/L6ttLDjyS1

But what these “brave doctors” do to change and save lives is not quite as heroic as Richards asserts. In fact, it’s the opposite:

In 2015, The Center for Medical Progress (CMP) was instrumental in showing the reality of what Planned Parenthood’s doctors do. CMP’s undercover videos pulled back the veil of the abortion industry.

The videos began with a meeting with Planned Parenthood’s director (at that time) of medical services, Dr. Deborah Nucatola. The first video shocked many Americans because Nucatola sat eating a salad and sipping red wine as she explained to the undercover reporters how carefully the Planned Parenthood abortionists executed abortions to get the right body parts intact:

I’d say a lot of people want liver… And for that reason, most providers will do this case under ultrasound evidence so they’ll know where they’re putting their forceps. We’ve been very good at getting heart, lung, liver, because we know that, so I’m not going to crush that part, I’m gonna basically crush below, I’m gonna crush above, and I’m gonna see if I can get it all intact.

Nucatola trained another abortionist who revealed her “brave” techniques to CMP. Dr. Amna Dermish from Planned Parenthood in Austin, Texas. CMP reported on Dermish’s goal in abortion — to extract an intact fetal brain:

My aim is usually to get the specimens out pretty intact…. Especially the 20-weekers are a lot harder versus the 18-weekers, so at that point I’ll switch to breech.

As CMP investigators tell her they heard about this from Nucatola, the conversation grows more disturbing:

“That’s what Deb [Nucatola] was telling us, was it really makes a difference for tissue collection at PPLA,” says one of the actors, referencing Nucatola’s technique for organ harvesting. “It’s really nice when it’s, yeah–I trained with her,” replies Dermish.

In reply to a question about harvesting fetal brain, Dermish notes, “I haven’t been able to do that yet,” but exclaims with laughter, “This will give me something to strive for!

Planned Parenthood Federation of America’s Medical Directors’ Council President, Mary Gatter, infamously told CMP she needed to figure out the cost of body parts of aborted babies for personal gain, saying, “Let me just figure out what others are getting, and if this is in the ballpark, then it’s fine, if it’s still low, then we can bump it up. I want a Lamborghini.”

“I wouldn’t object to asking Ian, who’s our surgeon who does the cases, to use an IPAS [manual vacuum aspirator] at that gestational age in order to increase the odds that he’s going to get an intact specimen.”

Gatter seems aware this violates rules governing tissue collection, but disregards it: “To me, that’s kind of a specious little argument.” Federal law requires that no alteration in the timing or method of abortion be done for the purposes of fetal tissue collection (42 U.S.C. 289g-1). 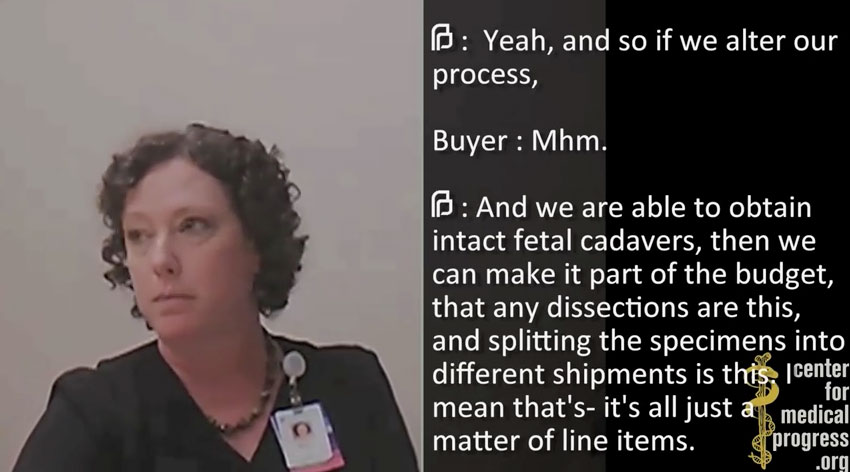 In the Lone Star state, CMP showed us the truth about some lone ranger “doctors” who disregarded federal laws for the bottom dollar at the cost of a baby’s life. Interviewing Director of Research for Planned Parenthood Gulf Coast, Melissa Farrell, CMP revealed that baby’s lives are just line-item products. CMP noted:

Farrell finally summarizes her affiliate’s approach to fetal tissue payments: “If we alter our process, and we are able to obtain intact fetal cadavers, we can make it part of the budget that any dissections are this, and splitting the specimens into different shipments is this. It’s all just a matter of line items.”

Then there’s Dr. Suzie Prabhakaran, the Vice President of Medical Affairs for Planned Parenthood of Southwest and Central Florida, who tells how she gets around the federal partial-birth abortion law by filling in a checkbox saying she “intends” to do the abortion by the book (which would entail killing the baby inside the womb with a feticide and then dismembering him). Instead, she admits she doesn’t use the feticide, and says she only has to verify that she “intends” to do so:

This is reminiscent of Nucatola’s statement who says in the first video (emphasis added):

The Federal [Partial-Birth] Abortion Ban is a law, and laws are up to interpretation. So there are some people who interpret it as its intent. So if I say on Day 1 I do not intend to do this, what ultimately happens doesn’t matter.

There are a myriad more comments and confessions of these “doctors” and their alleged bravery. The National Review highlights some in a piece it released after one of the last videos in 2017. Some abortionists’ comments:

Other Planned Parenthood abortionists do work at such a low standard that women get rushed to the hospital. Operation Rescue has reported on many women being rushed to hospitals from abortion facilities, like this woman, rushed to a New York City hospital last month.

Operation Rescue reports on Marc Elliot Heller, who was the Medical Director for Planned Parenthood Mohawk Hudson, Inc.  in New York, who discussed his abortion practices in an interview with a Cornell graduate student. Heller revealed:

Even if people didn’t like abortion, they would take care of my patient’s medical problems. There [at Planned Parenthood], it was always like you never knew. The transfers were very rare, but we always said to the ambulance, “Please come to the back entrance. Please don’t use any sirens or lights,” because we knew that the protestors that were there every day would call the press. And there would be a press thing about “another botched abortion.” So we went quietly out and then I drove along and sat there until either they were admitted to the hospital, which only happened a couple times, or they were discharged.

The issue with ambulances being dispatched without lights or sirens in order to cover up the gravity of the situation was so endemic in Missouri that the state passed a law to prevent the abortion corporation from endangering more women. A Missouri Senate report detailed the myriad violations of Planned Parenthood’s St. Louis facility.Additionally, as of last year, Planned Parenthood of the St. Louis Region and Southwest Missouri had sent its 65th patient to the hospital since 2009. Operation Rescue analyzed inspection reports on this affiliate on its multitudes of safety violations. The ensuing list is an astounding compilation of medical violations that repeatedly endanger the lives of women expecting one of those “safe and legal” abortions.

Despite the overwhelming evidence that shows Planned Parenthood abortionists only serve to give the entire profession a bad name by harvesting the body parts of aborted babies–some of whom are born alive–putting women in danger, and even killing them, Richards still praises those “brave doctors.” In Planned Parenthood’s official statement of Richards’ resignation, the abortion profiteer summarizes its medical triumphs (emphasis added):

“Cutting-edge research” appears to include taking a living baby and cutting up its parts to ship off to the highest bidder.

Yet the abortion giant continues to deceive otherwise intelligent people, such as Senator Kamala Harris, who worked hard to investigate and prosecute not Planned Parenthood, but the undercover investigators of CMP, when she was California’s Attorney General. Harris made a statement on Richard’s departure, saying:

Cecile has shown what it means to be a true fighter for the rights of women. In the face of unprecedented attacks, she has never backed down from a fight and always stood strong for the patients and doctors at Planned Parenthood and women across America. She put inclusive access to reproductive health care at the forefront of the political conversation and has shown it is not only key to women’s well-being, but also to true equality.

Harris, Richards, and every physician who uses his or her gifts and skills to kill preborn babies instead of saving lives prove they do not value “true equality,” because the most innocent human of all is violently destroyed.

So are these abortionists brave? Perhaps one might spin it that way, if “brave” is defined as flagrantly breaking the law and bringing destruction, all without shame or remorse. But that’s not how law-abiding people with integrity would define bravery.

It’s just how they define it at Planned Parenthood.