Planned Parenthood released its latest annual report (2018-2019) which reveals that the number of abortions committed at its facilities has risen, despite an overall national decline. The report states the abortion corporation hit a record for the most abortions ever committed at its facilities in one year – 345,672 – and claims abortion now makes up four percent of its affiliate medical services, instead of the three percent of services it has claimed for years — and which was debunked by the Washington Post fact checker. That, however, never stopped Planned Parenthood from using the inaccurate statistic.

Planned Parenthood has downplayed its abortion services for years, claiming it is first and foremost a health care organization. Now, after firing its emergency room physician president Dr. Leana Wen last year for being too focused on health care and not enough on abortion, it seems it has to report that abortion has grown to account for four percent of its total services. With Planned Parenthood now committing 40% of the nation’s abortions, it’s clear that it is America’s number one abortion provider and therefore the claim that abortion only makes up four percent of its services is a total misrepresentation of its statistics. 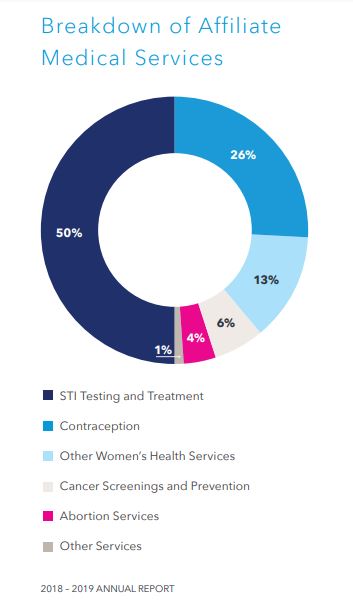 To get away with the claim that abortion accounts for just four percent of its services, Planned Parenthood divides its total number of abortions by the number of services it provides. These services include packets of birth control, pregnancy tests, urine testing, STI testing, and more, which are likely provided for each woman who comes for an abortion. The abortion corporation is unbundling its services to make it sound like it’s providing a lot of health services to people, but in reality, it is simply providing additional services to its abortion patients. A pregnancy test may cost around $10 but an abortion costs between $300 and $1500. The two “services” are in no way equal when it comes to what its purpose is and how much money they are bringing in. 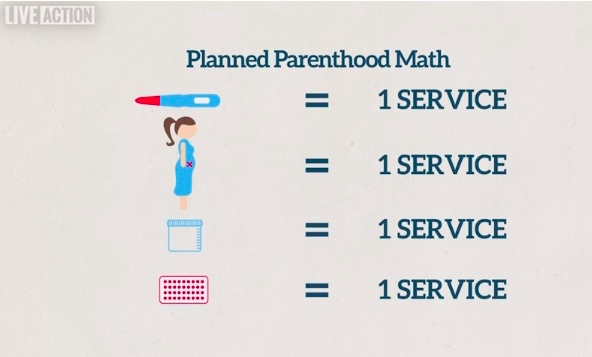 As Rich Lowry pointed out in the New York Post in 2015, it is nonsensical for Planned Parenthood to claim abortion is such a small part of their business. He said that, for example, “[t]he sponsors of the New York City Marathon could count each small cup of water they hand out (some 2 million cups, compared with 45,000 runners) and say they are mainly in the hydration business.” Or, explained Lowry, “Major League Baseball teams could say that they sell about 20 million hot dogs and play 2,430 games in a season, so baseball is only .012 percent of what they do.” What it comes down to, is Planned Parenthood can rearrange statistics to make them say whatever it wants.

But they can’t bury the truth or toss it in the medical waste bin. While abortion numbers are rising, contraception services at Planned Parenthood dropped two percent in 2018, breast exams declined by almost 11 percent, Pap tests dropped by almost seven percent, and total cancer screenings declined almost eight percent. Abortions, however, rose by four percent, from 332,757 in 2017 to 345,672 in 2018 — an increase of nearly 13,000 abortions in one year. Overall, Planned Parenthood performs less than two percent of clinical breast exams in the nation, performs zero mammograms, and provides less than one percent of all Pap tests. But it commits 40 percent of the nation’s abortions.

The truth is it doesn’t even matter what the percentage of abortions done by Planned Parenthood works out to be because by committing over 345,000 abortions in 2018, Planned Parenthood killed one preborn child every 91 seconds. And that’s obviously not something to brag about.