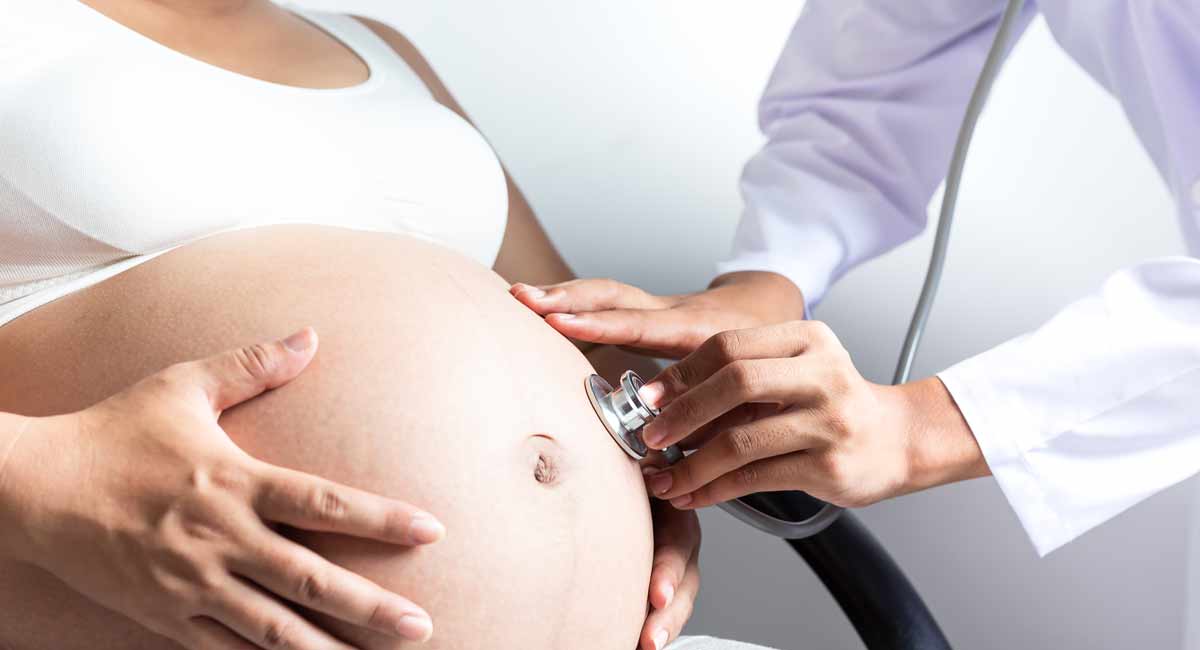 Doctors took to social media to publish their reactions to news that the state of New York has just removed virtually all protections for preborn children in the state, allowing abortion even up to birth for extremely broad “health” reasons. Although Roe v. Wade allowed for abortion in all months of pregnancy, it gave states the latitude to restrict abortion after 24 weeks. But the companion case of Doe v. Bolton opened up the flood gates for unfettered abortion on demand by allowing abortion for health reasons, which include reasons other than the physical health of the mother or baby.

Several doctors were outraged, and said so publicly on Facebook.

But as I read this law would allow abortion past what we call the threshold of viability, generally thought to be 23-24 weeks and inching ever downward. If I see a woman at 36 weeks gestation with preeclampsia her life could be at significant risk. But her baby also has a 99% chance of surviving outside the womb…. 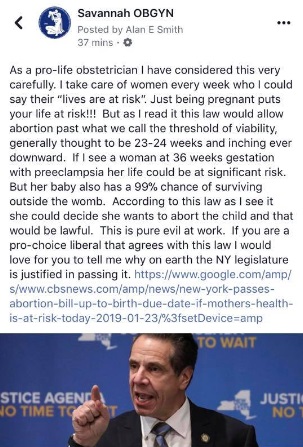 Dr. Smith called for others to “speak up,” reporting that Facebook shut down his attempt to boost a post: 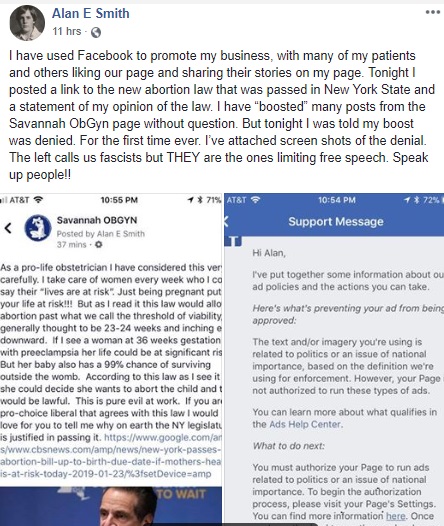 Dr. David McKnight’s post was shared thousands of times. As an OBGYN, he made it clear that, “[T]here is NEVER a medical reason to kill a baby at term.” He wrote:

It appears that the state of New York has legislated that an unborn baby can now be killed at term…. As a board-certified practicing OB/GYN physician for over 30 years, I need to say publicly and unequivocally, that there is NEVER a medical reason to kill a baby at term. When complications of pregnancy endanger a mother’s life, we sometimes must deliver the baby early, but it is ALWAYS with the intent of doing whatever we can to do it safely for the baby too…. God help us. 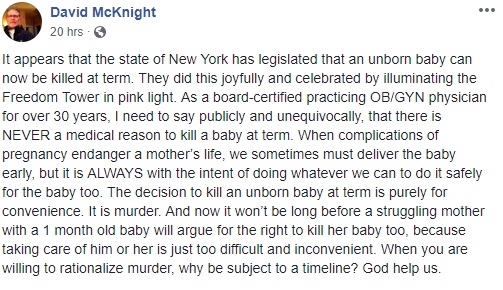 Dr. Brent Boles, whose testimony regarding abortion pill reversal went viral, compared abortion to evils such as slavery and the Nazi Holocaust, in which humans were deemed less to be less than persons:

The New York law, just passed… defines a human person as one who has been born and is alive…. I am un-apologetically pro-life. It is the appropriate position from the scientific, medical, and ethical point of view…. The legal precedent to which they point in Roe v Wade and Doe v Bolton is no more correct or properly decided than Dred Scott was in the 1850s in which the SCOTUS said that enslaving black people was legitimate…. 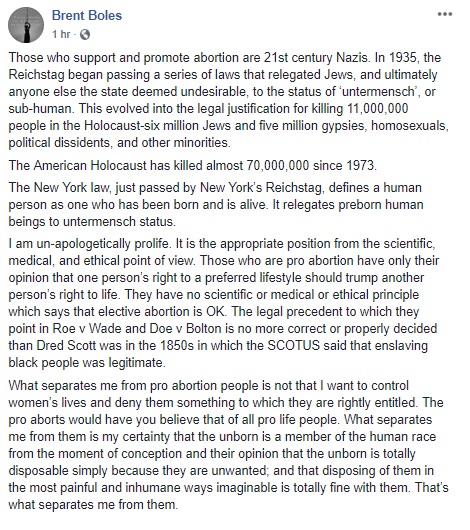 Dr. Rebecca Cisneros wrote, “… As an OBGYN I will not support this in my practice. The government may falsely lead women to think its safe and easy to have an abortion in the late 2nd or 3rd trimester but the young mother could end up loosing [sic] her life as well…. [T]his is NOT a win for women in any way….” 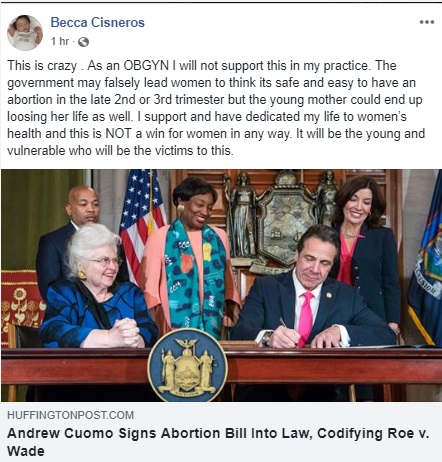 In response, her father Dr. Jose Cisneros added, “… OUR practice doesn’t support this at all.”

… I have spent hours trying to save the life of babies in the course of my career and I have held many babies born at 24-40 weeks (and too many born before viability)….

Most obstetricians like me are trained to fight to save babies beyond 24 weeks so I’m sure most of my colleagues will be ethically conflicted to kill a viable baby, but the law took care of that by opening up abortion to “any licensed medical provider” – that’s also scary, more women will die from abortion complications. Under the law in NY now “any licensed medical provider” means nurse practitioners, pa’s, midwives…. and even doctors with no OBGYN training – not trained in delivery or surgical procedures on the uterus or the complications that can happen in those procedures can legally perform an abortion. That’s like letting anyone who can ride a bike, or drive a scooter or car to take control of a 747!!! 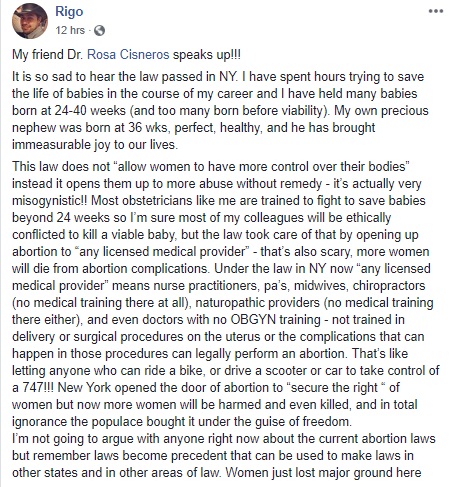 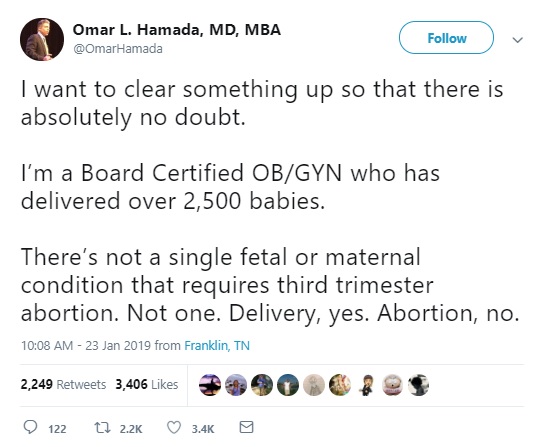 Abortion advocates claim late-term abortions are rare, but Live Action News has documented they are more common than the public is led to believe. A review of state data revealed that later-term abortions were as high as 15 to 17 percent of all abortions reported in some states. Additional research revealed that only a fraction of abortions generally are performed for the so-called “hard cases,” including the mother’s health. National abortion data reveals that over 100,000 abortions occur in the second and third trimesters each year.