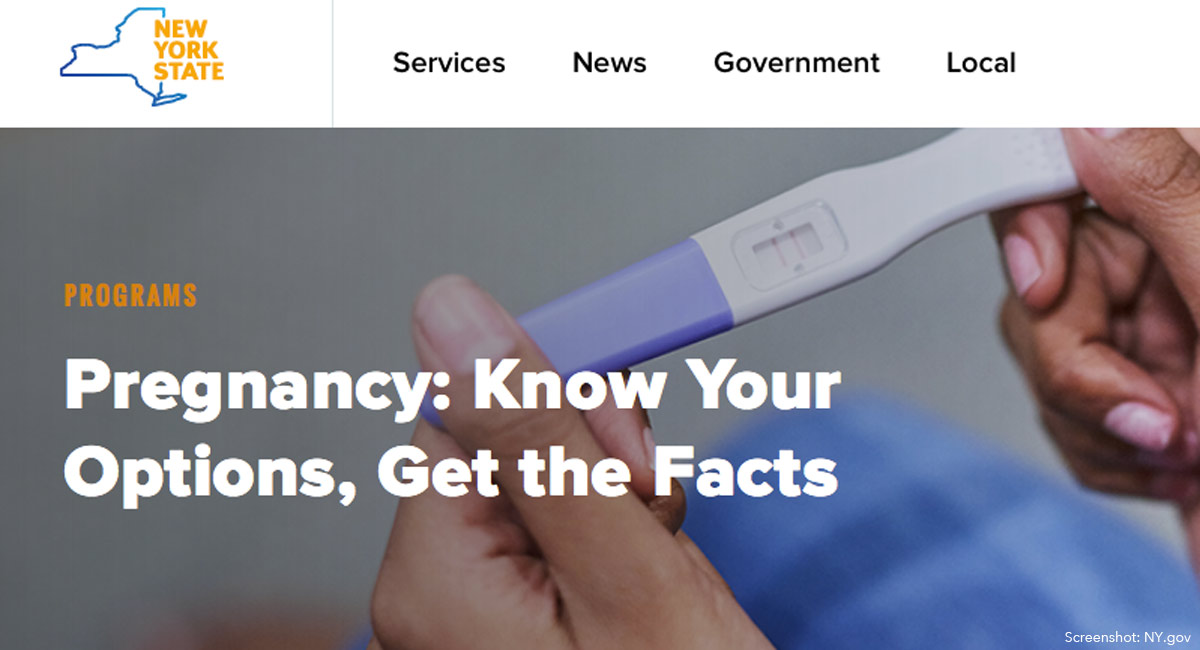 (LifeSiteNews) No longer content to preside over some of the most permissive abortion laws in the nation, New York Democrat Gov. Andrew Cuomo has announced a new “public awareness” campaign to promote abortion centers and counter what he calls pro-life “misinformation.” The campaign is called “Know Your Options,” according to a press release from the governor’s office, and it consists of subway ads encouraging women to visit a state website that purports to help them “get the facts” and connect to “comprehensive family planning services.”

“These actions are in direct response to widespread reports of organizations known as Crisis Pregnancy Centers or CPCs misrepresenting themselves as health centers to dissuade those seeking abortion from going through with that choice,” the announcement claims. “These reports show that CPCs often use false and misleading advertising and offer free services to attract women into their offices, where they then allegedly misinform and mislead those who seek pregnancy-related information.”

The press release does not cite any of these “widespread reports,” though abortion defenders have attacked CPCs for years. Pro-lifers have addressed such claims at length.

“While the federal government wages war on women’s reproductive rights, New York will fight back to protect women’s access to comprehensive, safe and affordable health care,” Cuomo declared. “In New York, we refuse to let President Trump and Washington take us backwards and jeopardize the rights of New Yorkers. We are launching this public awareness campaign to combat the insidious spread of misleading, medically inaccurate information about reproductive health and to ensure all New York women know the options they are legally entitled to.”

The website helps visitors look up health plans and licensed providers in the state, as well as New York’s health programs for low-income women. The latter provide“contraceptive (birth control) education, counseling and a broad range of methods (including long-acting reversible contraception such as IUDs and implants)” and “health education in community settings to […] promote access to reproductive and preventive health services,” as well as less controversial services.

The “Think You Might Be Pregnant?” section directs viewers to resources on prenatal care, parenting support, New York adoption services, and abortion. In-clinic abortions “are safe, outpatient procedures,” the website claims, while medication abortions entail “giv[ing] you medicine at an office visit and then allow[ing] you to go home with more medicine to end the pregnancy.”

“Insurance, including Medicaid, covers abortion services so that cost is not a barrier,” it continues.

In an implicit swipe at CPCs, the website stresses that women should make sure they are turning to “Quality Family Planning Providers,” who offer information “without pressure or bias,” provide the “most up to date scientifically-proven reproductive health services available,” and are “licensed to provide services in NYS and be able to tell you what kind of license they have.”

Abortion advocates often claim that CPCs misrepresent themselves as medical facilities despite not being licensed. Pro-life activist and former Planned Parenthood clinic director Abby Johnson has responded by noting that leading CPC groups Heartbeat International and Care Net do recommend that CPCs which offer ultrasounds or lab tests employ licensed medical professionals, whereas Planned Parenthood does not require licensing for its own workers performing those functions.

In addition to disputing the various pro-abortion claims against CPCs, pro-lifers argue that many of these attacks could be more accurately directed at Planned Parenthood and other abortion centers, from lack of options and poor health standards to false information and pressure to choose abortion.

Cuomo’s latest move to promote abortion is part of a long record of pro-abortion advocacy, which includes permitting abortion effectively until birth, forcing taxpayers and insurance companies to pay for abortion, a largely-symbolic push to codify Roe v. Wade in state law, and declaring that “right-to-life” supporters “have no place in the state of New York.”