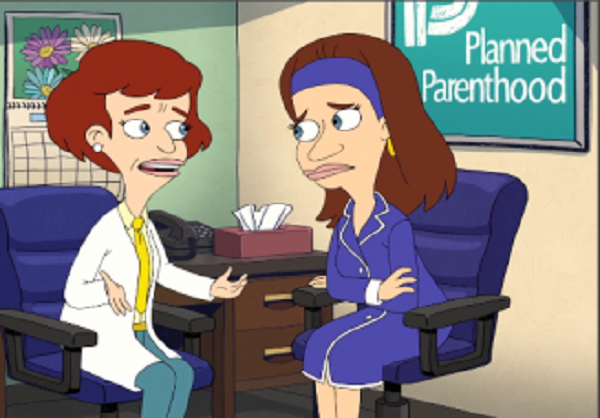 Kroll has admitted that the show, directed at young teens, is “dirty,” but told AV, “Yes, I believe that the show’s incredibly dirty, and if you told me your 13-year-old wasn’t allowed to watch it, I’d be like, sure, I get it. But your 13-year-old is very likely watching or has access to much more crazy, dirty, and disgusting things on the internet that are much less aware of the messages they’re putting out into the world…. The whole reason we made the show is because we believe that the more that this stuff around puberty and sexuality is talked about, the healthier people will be.”

According to a review by Karen Townsend at Newsbusters, episode 5 begins when “Coach Steve (Nick Kroll) is newly sexually active and boasts about it to the sex education class he is teaching….”

As STDs and unwanted pregnancies were brought up, one student suggests that Steve go to a Planned Parenthood for more information. When he asks, “What’s Planned Parenthood?” Jay Bilzerian (Jason Mantzoukas) answers, as many of us would, by saying, “It’s an abortion factory.” He says he was told that by his father, a lawyer who regularly drops his receptionists off there. Ugh. Two of the girls, Missy Foreman-Greenwald (Jenny Slate) and Jessi Glaser (Jessi Klein), gave credence to the standard liberal feminist line that Planned Parenthood provides cancer screening and “they save lives.” Jay’s response is to ironically question, “By killing babies?”

The episode progresses to various sketches promoting Planned Parenthood. Andrew’s (John Mulaney) mother daydreams about her younger days and we follow her hooking up with a one night stand, discovering she’s pregnant, going to Planned Parenthood for an abortion, and getting into a fender bender with the man who turns out to be Andrew’s dad on the way home, all while the upbeat song “Groove Is in the Heart” plays.

Missy: “Maybe you should go to a doctor, or Planned Parenthood.”

Jessi: “Jay, you don’t know what you’re talking about. You’ve never even been to a Planned Parenthood.”

Jay: “Oh, for your information, I’ve been in the car a number of times when my dad has dropped off his receptionist there. And, he calls it ‘an abortion factory.’ “ 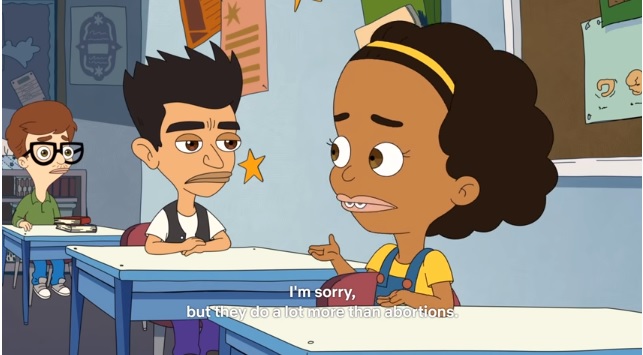 Missy: “I’m sorry but they do a lot more than abortions.”

Jessi: “Yeah, they save lives.”

“The audience is lectured that it is a misconception that Planned Parenthood mostly performs abortions. ‘Abortions make up only a tiny percentage of what they do,’ one of the students parrots the old debunked line, citing other things like breast exams,” Townsend adds.

Live Action has documented that PP’s 3% statistic is a myth. The Washington Post even gave this statistic “three Pinocchios,” and Slate called it “the most meaningless abortion statistic ever”:

In addition, Live Action News has documented that while many of Planned Parenthood’s health services are decreasing, abortions there are increasing. The primarily teen audience of Big Mouth may believe that it is not focused on abortion, but its abortionists commit well over one-third of all abortions reported nationally. As Live Action News has previously noted, statistics show that the organization’s marketshare of abortion is increasing, while national abortion numbers have dropped.

Kroll told Variety, that Dunlap, who, according to the organization’s most recent 990, earns over $340,000 a year running the affiliate, basically said, “Obviously donations are great, but we at Planned Parenthood really want people to tell stories involving Planned Parenthood.’” 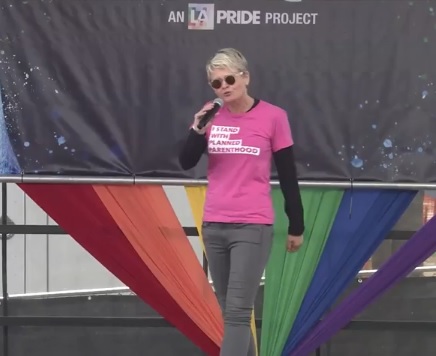 “Planned Parenthood is a real trigger for a lot of people, and that’s the reason we really wanted to talk about it,” Kroll added in an interview with AV. “People think it’s only a place where you get abortions, and we firmly believe that it is about reproductive health across the board, with a number of different services.”

But here are the facts:

A review of Planned Parenthood’s “services” over the past ten to eleven years reveals:

Planned Parenthood, with its numerous abuses, including the failure to report child sexual abuse, is promoted heavily by the entertainment industry with the goal of “destigmatizing abortion.” But, as Hollywood tries to push the idea that the abortion giant isn’t really focused on abortion, Planned Parenthood just released its 2019 plan to “expand abortion access.”

Maybe Big Mouth needs to do a better job of checking facts rather than parroting lines from Planned Parenthood’s script.