The National Abortion Federation (NAF) is seeking to hire an “Intelligence Analyst” to create “dossiers” that track pro-life activities, individuals and groups and so-called acts of violence by “anti-choice extremists.”

According to the job posting placed on Indeed.com, NAF’s Intelligence Analyst will “conduct research and gather intelligence on anti-abortion individuals and activities” and “work with clinic staff and local, state, and federal law enforcement officials to prevent and respond to incidents of violence and disruption at abortion clinics throughout the United States, Canada, Mexico, and South America.” 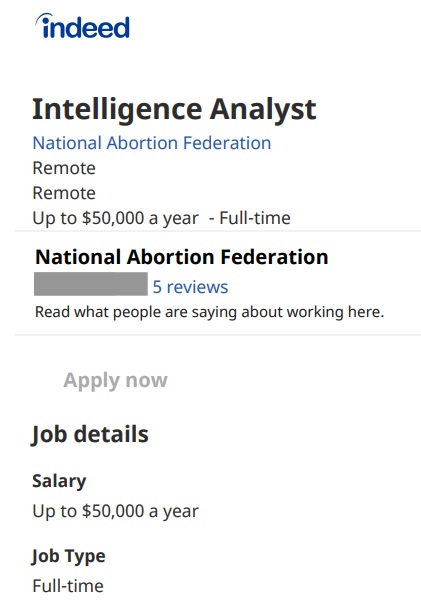 NAF was founded in 1977, which at the time evolved from two organizations — the National Association of Abortion Facilities (NAAF) and the National Abortion Council (NAC). Their first NAF Board of Directors included Christopher Tietze, MD, of the Population Council, Jeannie Rosoff of the Guttmacher Institute, Judy Widdicombe of Reproductive Services in Missouri (NAC), Merle Hoffman of Choices in New York (NAAF), Frances Kissling, Joan Crowley, Curtis Boyd, Warren Hern, and Kenneth Edelin among others, according to NAF’s 2007 annual report. The organization’s leadership has recently added people like abortionist Daniel Grossman, who in December 2021 suggested that ER doctors should falsify records to hide abortion pill complications in a post-Roe era.

The NAF collects alleged “violence and disruption” claims from abortion providers and publishes them annually. While there are serious incidents listed, NAF pads the numbers by including incidents of non-violent civil disobedience and protest. NAF even recently admitted the majority of incidences they categorize as “violence” involves mostly trespassing – which may not even be linked to pro-lifers. The report also lacks evidence that every alleged act is being committed by pro-life advocates and not a disgruntled employee, angry family member, or random criminal. The fact is, incidences of violence also occur at pro-life pregnancy centers as well as outside abortion facilities, directed at peaceful pro-life sidewalk counselors.

NAF’s job posting claims the right candidate for the job of ‘Intelligence Analyst’ (IA) would be one with “high school or equivalent” education along with intelligence, data analytics, and risk analysis experience. The job will pay $50K a year and the position can be “remote.”

Duties of the position are to gather “intelligence on the activities of anti-choice extremists online, from members, and from coalition partners,” and creating and maintaining “dossiers, resources guides, and other files on known extremists.”

According to the posting, the IA will also document “the presence of threatening anti-choice extremists and provide[] support to clinics at sites of anti-choice protests; document[] anti-choice protests, harassment, and violence to law enforcement agencies for use in criminal investigations.”

Duties will also include “Organizing raw data, verifying reported incidents, and identifying outliers and duplicate values as reported to us by members and PPFA” as well as working with NAF’s development team to “provide data, incidents, and security support information to funders to develop strategy to acquire and maintain grants.”

The IA will then report “findings on research, trends, and intel to the Security Director,” likely Michelle Davidson, and present at “NAF meetings,” as well as work in coalition with “other pro-choice security personnel in sharing intel and information.” As well as maintaining “knowledge of current Open-Source Intelligence (OSINT) trends, tools, and best practices; and stay informed about applicable laws and regulations.”

The job posting also gives a peek into the software systems used by NAF, claiming the IA will build and maintain “lists of keywords, names, and terms for filters and data streams for Babel Street” which, according to Babel Street’s website, is an “AI-enabled analytics platform.” In addition, NAF’s IA will maintain and update “records for security contacts and law enforcement in Netforum,” another software tool.

While NAF is fixated on the conduct of “anti-choice extremists,” internally it has its own organizational sins. In 2018, NAF staffers publicly accused the abortion umbrella group of failing to address sexual harassment claims by the organization’s then security head, Mark Mellor. According to reports published by the pro-abortion RewireNewsGroup, staffers described Mellor’s behavior as “somewhat creepy,” “extremely inappropriate,” “extremely unprofessional,” and “deeply inappropriate.”

NAF members have also had their share of scandals and pro-lifers have repeatedly documented the careless way some NAF members treated abortion patients, including sexual abuse. NAF’s lax standards were also on display in the case of notorious House of Horrors abortionist Kermit Gosnell. According to the Grand Jury Report, Gosnell was allowed to work at a NAF clinic in Delaware. And while NAF denied Gosnell’s Philadelphia abortion facility membership after it was observed that “no one was monitoring or taking vital signs of patients who were sedated during procedures,” among other serious violations, prosecutors noted that NAF failed to report the violations to authorities.

Recently, the group ReproJobs called NAF out on Twitter for a number of internal issues, including allegations of racism. A review left on Glassdoor stated in part, “In terms of work-place culture, some employees at NAF are blatantly disrespectful and downright abusive. NAF claims to be a feminist organization… yet NAF continues to defend and protect sexual harassers and racists who work here…” A separate review complained about being “underpaid,” and alleged that “multiple sexual abusers on staff … had several complaints against them, racisim[sic] was rampant, and union busting….” That writer went on to claim, “The CEO and many other leaders at the organization upheld the membership and hero-worship of prominent community members after they were accused of rape. Truly, working here was a traumatic experience….”