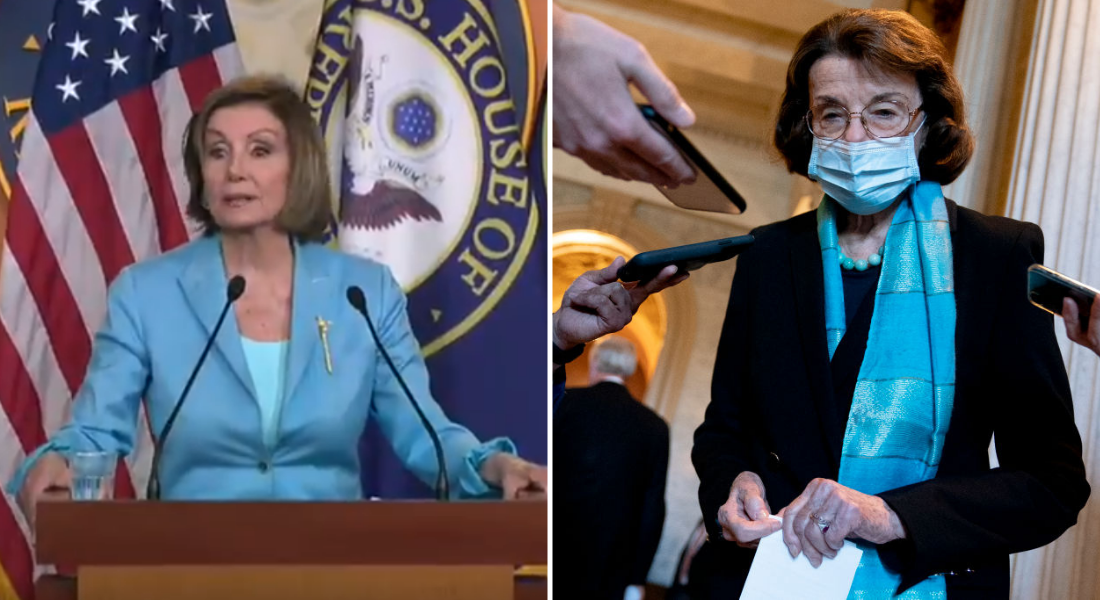 House Speaker Nancy Pelosi (D-Calif.) and Senator Dianne Feinstein (D-Calif.) both refused to answer questions about whether a preborn child at 15 weeks gestation is a human being. The upcoming Supreme Court case Dobbs v. Jackson Women’s Health Organization will address Mississippi’s 15-week (four month) abortion ban, along with the question of whether abortion can be banned prior to the ever-changing standard of “viability” (the ability of the preborn child to survive outside the womb).

Julia Johnson, a CNS News intern and student at the University of South Carolina, attended a press conference where she was able to ask a question of Pelosi about the humanity of preborn children. “The Supreme Court this fall will review a Mississippi law that bans most abortions after 15 weeks of pregnancy,” Johnson began. “Is an unborn baby at 15 weeks a human being?”

Pelosi, a self-proclaimed Catholic who consistently votes in favor of abortion, dodged the question with a response merely reiterating her unyielding support for legal abortion.

“Let me just say that I’m a big supporter of Roe vs. Wade,” she said. “I am a mother of five children in six years. I think I have some standing on this issue as to respecting a woman’s right to choose.”

Johnson tried to reiterate her question, repeating, “Is it a human being?” Pelosi, however, ignored it and moved on to another reporter.

Not sure if y’all saw this yet, but that’s Pelosi absolutely dodging my question 👇🏻👇🏻👇🏻pic.twitter.com/RNvnkFNJKf

Senator Feinstein was likewise questioned by a CNS News reporter, and like Pelosi, dodged the issue at hand.

“In the fall, the Supreme Court is going to review a Mississippi law that bans most abortions after 15 weeks of pregnancy,” Ashlianna Kreiner, the CNS News reporter began. “So, my question is, do you believe that a baby, an unborn baby, at 15 weeks is a human being?”

Feinstein and her staffers seemed to get flustered, discussing back and forth about whether or not to answer the question, before Feinstein finally responded.

“What’s the question? That an unborn baby at what?” she asked.

Kreiner responded, “At 15 weeks is a human being?”

Rather than give her opinion, Feinstein brushed it off, replying, “Oh, I’m not going to get into that at all. Thank you, though.”

Mississippi passed a law in 2018 banning abortion after 15 weeks of pregnancy, except in cases of a medical emergency or severe fetal abnormality. (Abortion is never actually medically necessary.) Roe v. Wade, decided in 1973, and made abortion into a “right” across the country under the “right to privacy” in the Fourteenth Amendment. Abortion was therefore federally legalized through viability, which is typically considered to be 24 weeks of pregnancy. Today, however, children have survived being born as early as 21 weeks as medicine advances, making viability a meaningless benchpoint.

Even more importantly, viability has no bearing on the issue of when a preborn child is actually alive.

Dr. Tara Sander Lee, a molecular geneticist with over 20 years experience in academic in clinical medicine — including a fellowship at Harvard Medical School and Boston Children’s Hospital — and as a molecular pathology inspector for the College of American Pathologists, discussed the issue of life for one of the entries in Live Action’s “Pro-Life Replies” series.

“At the moment a sperm fuses with an egg (known as fertilization or conception), a new, unique human being that is genetically distinct from both parents comes into existence,” Lee said. “Gender, ethnicity, hair color, eye color, and countless other traits are determined at that moment. This genetic blueprint remains the same for his or her entire life, and no other human being past or future will have one identical to it.”

Just three weeks after conception, the preborn child has a beating heart. Though abortion advocates have dismissed this as a meaningless pulsing of muscle, it’s actually a vital part of human development. According to the Endowment for Human Development (EHD), the heart is the preborn child’s, or embryo’s, first working body system. Blood is actually being pumped through the baby’s body, as can be seen in the EHD video below:

By eight weeks, brain waves can be measured. Other developments, often within the first trimester, make the humanity of the preborn child undeniable. “It is also a fact that pre-born children exhibit behaviors that we do on a daily basis — they smile, feel pain, cough, yawn, hiccup, respond to sound and light, sleep, and possibly even dream. Some researchers have even shown that babies may cry while in the womb,” Dr. Sander Lee said, adding, “[T]here are thousands of biology and embryology textbooks, modern DNA studies, medical dictionaries, science professors and medical researchers that all confirm that life begins at fertilization.”

This humanity is even more evident by 15 weeks, when preborn children respond to touch, have begun to develop teeth, have taste buds, and are even producing hormones — only a little over a month away from being able to survive outside of the mother’s womb.

Pelosi and Feinstein do not want to answer questions about a preborn child’s humanity because they know the truth, and that truth it threatens the foundation of their belief in abortion. To support abortion at 15 weeks means either the denial of a living person’s humanity, or the willing discrimination against a human being simply because of his or her age and location. It’s an uncomfortable mindset to reckon with either way, which is likely why so many Americans oppose late-term abortion.

So the question then becomes, why are Pelosi and Feinstein so out of touch with the constituents they claim to represent?