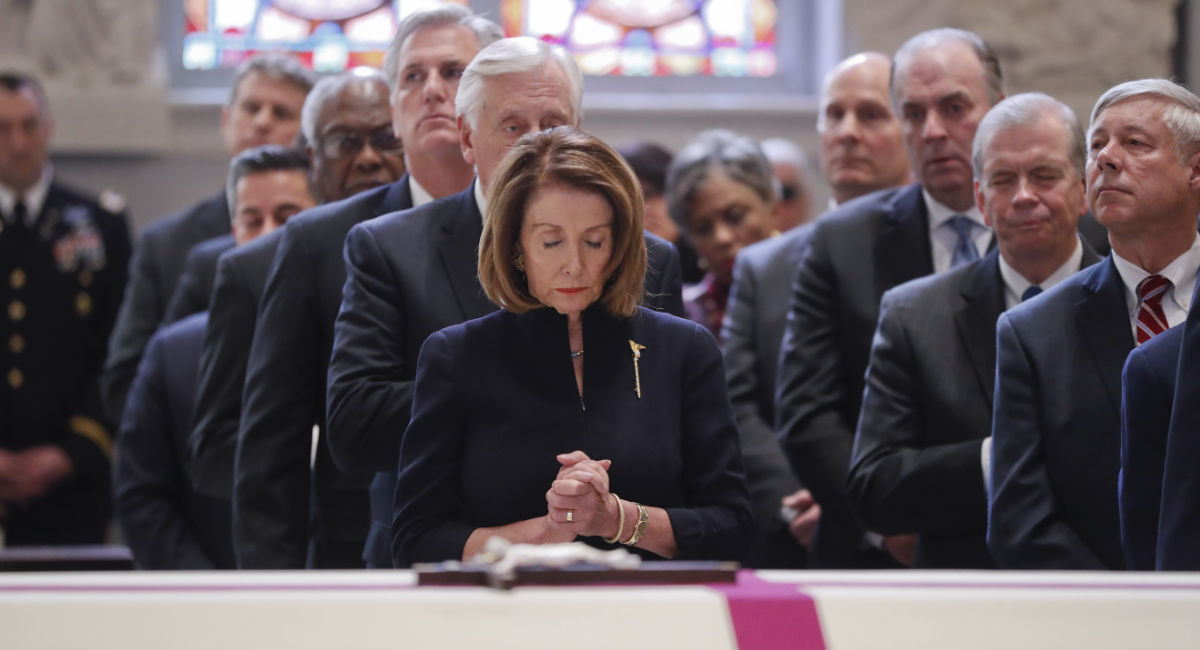 As U.S. Catholic bishops consider forbidding actively pro-abortion politicians from receiving Communion, House Speaker Nancy Pelosi has spoken out saying that she can “use [her] own judgment” when determining whether or not she should participate in Communion. But the bishops are firing back.

“I think I can use my own judgment on that,” Pelosi told a reporter earlier this month regarding bishops calling for pro-abortion politicians to reconsider their abortion stance or stop receiving the Eucharist. According to Catholic Vote, she also said she was “pleased” by a statement from the Vatican that seemed to side with her, when in actuality, it did not. 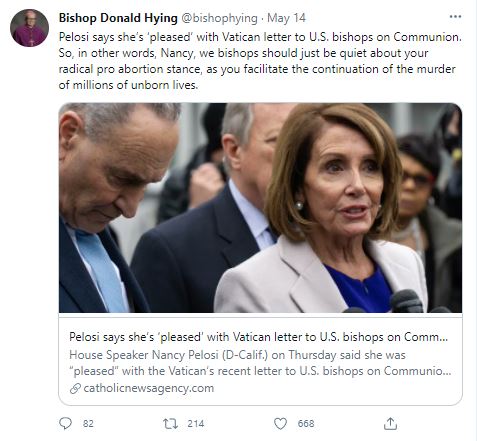 Bishop Donald Hying of the Diocese of Madison, Wisconsin, tweeted in response, “So, in other words, Nancy, we bishops should just be quiet about your radical pro abortion stance, as you facilitate the continuation of the murder of millions of unborn lives.”

Archbishop Samuel Aquila of Denver responded to Hying’s tweet with “Amen! We will never stop defending human life in our faithfulness to the Gospel!”

But it was the Archbishop of Pelosi’s own diocese in San Francisco that had the most words of wisdom to share with her. In a statement published on Monday, Archbishop Salvatore J. Cordileone wrote:

If we look around us and see what is happening in our society today, we will see that this fact once again demonstrates that violence begets violence. 66,000,000 babies murdered in their mothers’ wombs. The response to a woman in a crisis pregnancy is not violence, but love.

He added, “It is for this reason that I’m happy to know that Speaker Pelosi said she is pleased with the letter of Cardinal Ladaria, Prefect of the Vatican’s Congregation for the Doctrine of Faith, to Archbishop Gómez, President of the United States Conference of Catholic Bishops, regarding the issue of Catholics prominent in public life who advocate for practices that are gravely evil. In that letter, Cardinal Ladaria advises the U.S. bishops to use as a guide in discerning how to address this situation the principles laid out in a private letter in 2004 from the then-Cardinal Ratzinger, Prefect of the CDF at the time, to the bishops of the United States.”

That private letter, according to Ratzinger, states that advocating for abortion or euthanasia is formal cooperation in grave sin. It also states that bishops must talk with pro-abortion Catholics who are prominent in public life to help them understand that they are participating in and perpetuating a grave evil in order to help them have a change of heart. The letter also notes that if those conversations prove to be fruitless, bishops must declare that those persons are not to receive the Eucharist.

Bishops have a responsibility to spiritually guide members of the Church, and that includes Pelosi and other pro-abortion Catholics. Abortion intentionally kills an innocent human being, whether the law classifies that human being as a person or not. Any Catholic who advocates for abortion is participating in mortal sin, and it is the bishop’s job to steer the flock away from such and all sin.

Pelosi’s policies prop up abortion businesses like Planned Parenthood. She is no mere bystander. She and other pro-abortion politicians actively promote and enable the killing of millions of innocent human beings.