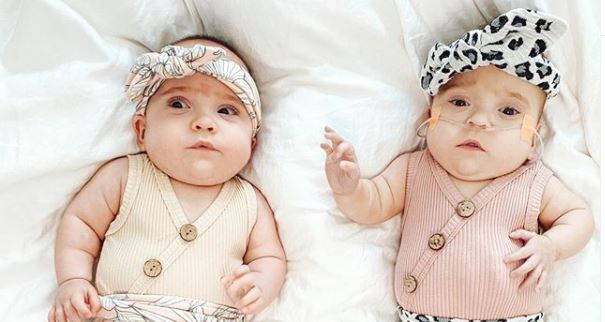 Micro-preemie identical twins Vivienne and Margot were born prematurely at just 22 weeks and five days, and 23 weeks at the start of the COVID-19 pandemic shutdown in March. But with just a 20-30% chance of survival, the girls were able to beat each of the odds stacked against them and are a total joy to their grateful parents.

“You were born four and half months premature at the start of a global pandemic. I pleaded with God to let you live, yet I prepared my heart for you to die,” their mother Laura wrote to the girls in a blog post. “Only one in seven babies born as early as you were make it—the odds are even worse for twins. Only one in four hospitals in the U.S. would even attempt to save you. At just one little pound and four ounces each, most people have never seen one baby as tiny as you, and we got to see two. We got to watch you develop outside the womb—we watched your little eyes come unfused, and your skin change. We watched your ears finish forming and your nails harden. We watched you fight, and I sang to you about how I just wanted to know you better.”

Miracles still happen. These two are my water-into-wine-feeding-of-the-five-thousand-back-from-the-dead miracles. Born 17 weeks early, we didn’t think we would get 85 seconds with them, let alone 85 days. But here we are. Swipe to see where we started.

Though born a few days apart, the girls each weighed just one pound, four ounces. The doctors weren’t sure if either girl would survive, and they each faced their share of medical obstacles including eye surgery and intestinal surgery. Surgery comes with major risks for premature babies and there was a high chance they wouldn’t survive.

“Miracles still happen,” their mother wrote on Instagram. “These two are my water-into-wine-feeding-of-the-five-thousand-back-from-the-dead miracles. Born 17 weeks early, we didn’t think we would get 85 seconds with them, let alone 85 days. But here we are.”

Vivienne seemed to overcome her challenges with more ease than Margot did. Margot would make advancements and then suffer setbacks, requiring more oxygen at times and dealing with an open wound from surgery.

My insanely talented friend, @southandemory, captured Margot’s homecoming, and I’ve been reliving it all day.

At four months old, the girls celebrated their original due date, but Margot still had more concerns than her sister. Her belly was still swollen and her lungs were compromised because of it. Vivienne was able to be discharged, but Margot had to remain in the neonatal intensive care unit. Doctors discovered a blockage in her intestines and performed surgery to repair them. A few weeks later at six months old, she was moved to a complex care unit for older babies who still need extra support.

It was after 224 days in the hospital that Margot was able to join her family at home. About a week later she was finally allowed to bottle and breastfeed. She still uses supplemental oxygen, but together with her sister, she is thriving and growing.