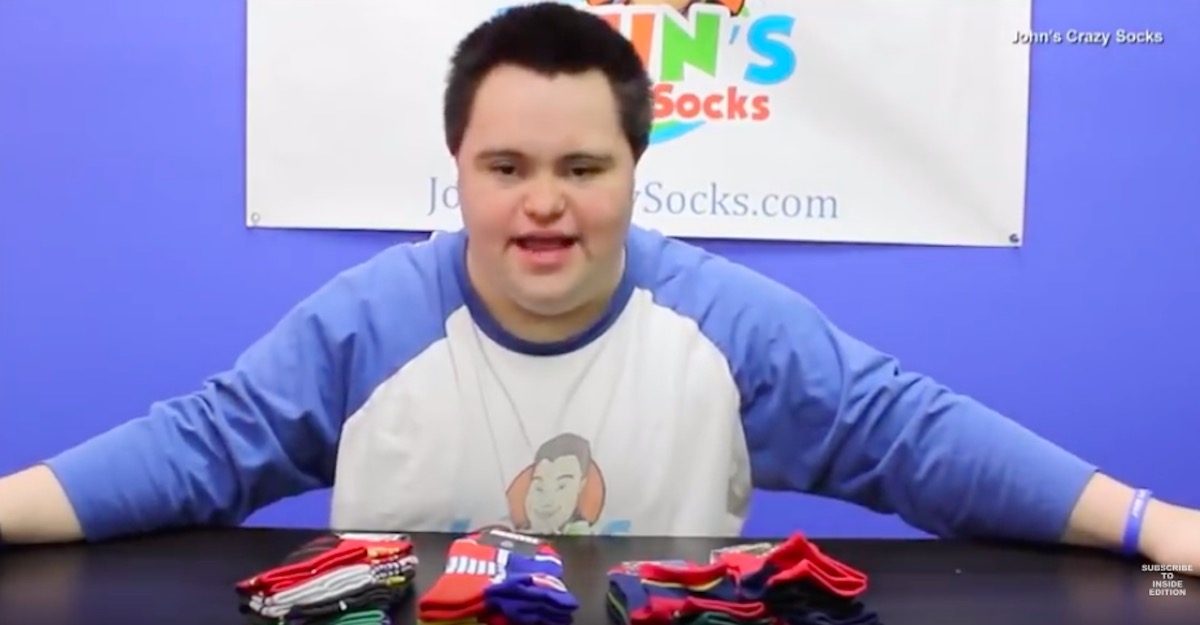 John Cronin, founder of “John’s Crazy Socks,” has won the Ernst and Young Entrepreneur of the Year Award for the New York region. Cronin is the first person with Down syndrome to ever win the award, considered one of the most prestigious business awards in the New York area. Cronin, along with his father Mark, won in the “Mission Driven” category, beating out 10 other companies.

Cronin co-founded “John’s Crazy Socks” with his father, and is the Chief Happiness Officer of the company. Winning this award for Cronin was a sign that Down syndrome doesn’t keep him from achieving his dreams. “I’m so excited to win!” he said in a press release. “Every day, we want to show the world what is possible when you give someone a chance. I have Down syndrome, but Down syndrome never holds me back. Look at what people can do, not what they cannot do.”

The Cronins went into business because John wanted to make “crazy socks,” but he also wanted to make a difference for other people like him. After graduating high school, Cronin realized that there weren’t many opportunities for people like him to find meaningful employment. “There are not many options open to people with disabilities,” Mark Cronin told CNBC. “All job training programs and workshop programs had waiting lists and not many employers offer jobs for people like John, adding, “John didn’t like the options he saw, and in fact the options for people with differing abilities are somewhat limited.”

“I wanted to go in business with my father,” John explained. “Because I love my dad so much.” And on World Down Syndrome Day, the idea for John’s Crazy Socks was born after John created festive socks for the occasion. “John had worn crazy socks his whole life. That was his thing,” Mark said, explaining, “When John came and said we should sell socks, well, it seemed like an idea worth trying. And that’s what we did. We didn’t go prepare a business plan. We didn’t do a lot of research… let’s get something up and see how people respond.”

What set their business apart was John’s idea, though: home delivery for every order. “I’d go out, knock on doors and the whole family are waiting for me,” John said. “I jumped to the door and, their response: They loved it. They even took a picture with me, take a video with me. It’s amazing.” Word quickly spread, and the business grew. They now carry over 2,000 styles, including “awareness” styles, such as socks for Autism Awareness and Down Syndrome Awareness. And in addition to selling socks, they’re also on a mission to make a difference. “We believe it is not enough simply to sell things; we think it is important to have a mission and to give back,” their website states.

Five percent of their earnings are donated to the Special Olympics and other disability organizations, and over half of their employees are persons with disabilities. They frequently feature these employees in an effort to show the world what people with disabilities can do, through videos, school tours, work groups, and speaking engagements. And they’ve continued their goal of keeping the business personal, with every order receiving a handwritten note from John himself.

John’s Crazy Socks is just one of many successful businesses run by people with Down syndrome. Blake Pyron runs Blake’s Snow Shack in Texas. Sky Simpson and his dad own Sky Boxes, a mailbox installation and repair business in Indiana. Collette Divitto started a cookie business, Collettey’s Cookies. Tim Harris started his own restaurant, Tim’s Place. And there are many more.

Between their mission and their massive success — John’s Crazy Socks earned over $1 million in revenue in their first year alone — it’s not surprising that the Cronins would be honored for their achievements. “It’s not just the selling part,” Mark said. “We are showing the world what we can do.”