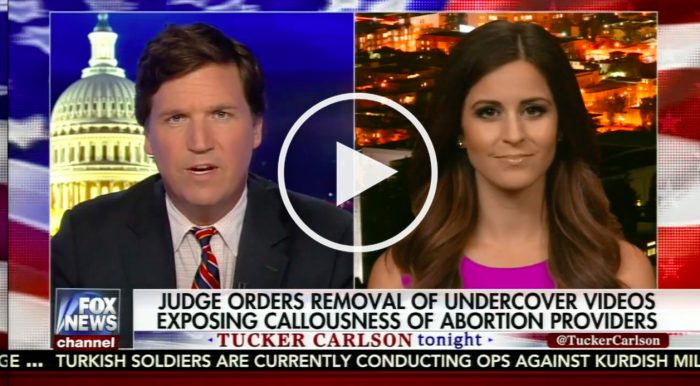 Last week, the Center for Medical Progress released a bombshell new video. In it, executives and abortionists from the National Abortion Federation and Planned Parenthood made callous, disgusting jokes about abortion, while also disclosing potentially illegal activity. The grisly admissions made on tape were horrifying, and the footage didn’t last long – YouTube quickly removed the video, and then U.S. District Court Judge William Orrick further forced the removal of the video and threatened to hold CMP in contempt for its release. (You can still view the video here.)

Orrick’s actions were roundly criticized, not only by pro-lifers, but also by defenders of free speech and of journalists. On Wednesday, Fox News host Tucker Carlson addressed the apparent censorship, criticizing Judge Orrick for ordering the video to be removed. Carlson argued that Orrick intentionally “suppressed” the video and that this was an attack on the First Amendment.

Lila Rose, the founder and president of Live Action, appeared on Carlson’s show. Rose argued that the horrifying nature of the video is exactly why Americans need to see it.

“Is the allegation that – I mean, the only way, it seems to be, that would be legitimate if you could keep something under wraps like this video, is if you could show that they’re not real,” Carlson said. “Is there any evidence these videos are not real?”

“I think precisely because they are real, is why there’s so much opposition,” Rose said. “This is National Abortion Federation and Planned Parenthood’s own trade show. This is where they get together and talk about what they do every day.”

Rose detailed the admissions and gruesome descriptions of abortion made by top Planned Parenthood staff: “The callous laughter about the abortion procedure, about tearing apart a child’s legs, taking the legs off from the navel when they’re delivering the child, that discussion by Planned Parenthood abortionists on the tapes, their discussion of the head getting stuck in the cervix and complaining about the abortion procedure… I mean, horrific, so difficult to hear. But this is exactly what the public should hear, Tucker, because Planned Parenthood, the very abortionists that are laughing about what they’re doing on these tapes, are receiving a half a billion dollars every single year from taxpayers.”

Carlson pointed out that the abortionists are acknowledging what they’re doing – taking human life – and questioned how a judge could mandate that the American people are not allowed to see them.

“Well, it appears, too, that it’s not just – you know, you’re not the only one not showing it, Tucker, but YouTube took it down over the weekend,” Rose responded. “Twitter just yesterday sent me a notice, I had it up on my feed, on my Twitter feed, and they took it down. It appears that social media companies as well are fulfilling the order. I mean, this just goes to show that there’s a chilling effect right now on journalism that is the opposing viewpoint on abortion. If you don’t agree with abortion, if you want to expose what abortion is, and actually use their own words – of abortionists – then you are going to have to tangle with courts, you’re going to have to tangle with attorney generals like in California, what David’s tangling with, you’re going to have to tangle with social media executives who don’t want your stuff on channels, on YouTube, on Twitter.”

Tucker Carlson then noted that some would say this might very well be the right time to engage in civil disobedience, as Americans have the right to say what they believe to be true and prevent evidence backing those beliefs up. Too often, it seems that the abortion industry is the exception to this rule.

“Is there any place for people who are interested to find these videos?” he asked.

“The public deserves to know,” she continued. “This is a corporation. Planned Parenthood is a corporation, and they’re the ones on many of these tapes, that’s receiving half a billion taxpayer dollars every year, they’re claiming to do it in the name of women’s health, and yet their own latest annual report – which just came out this weekend – shows that their cancer screenings are declining, prenatal care was cut in half, their abortion numbers are going up, their taxpayer money is going up.”