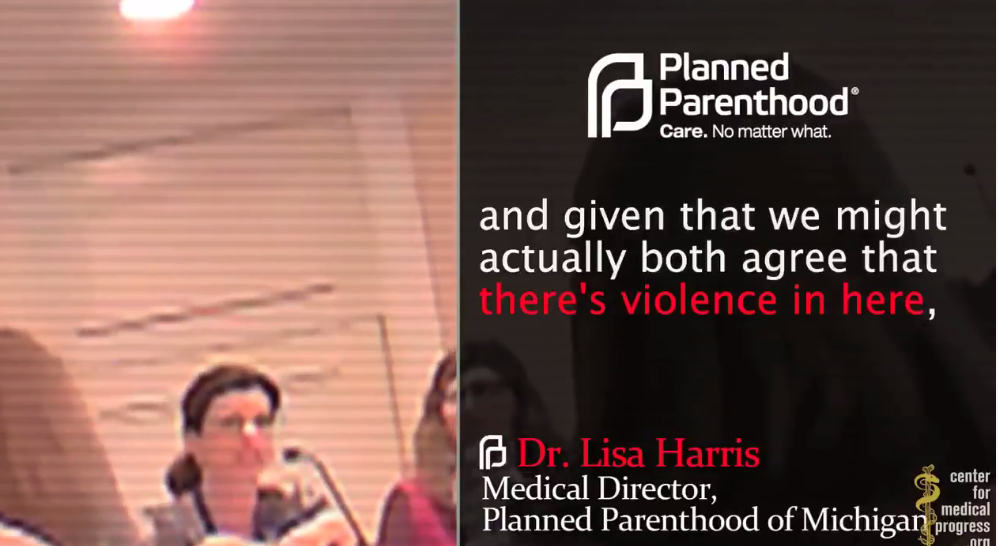 On Thursday, another Center for Medical Progress video again exposed the abortion industry at a National Abortion Federation conference. According to the March for Life, Planned Parenthood leaders and members compromise about half of NAF’s membership.

As Live Action News reported, YouTube has taken down CMP’s latest video, which can still be viewed here.

The video is gruesome and disturbing, but also full of truth. Dr. Lisa Harris, the medical director at Planned Parenthood of Michigan, explains that abortion providers and pro-lifers “actually see the fetus the same way” — a shocking admission, which must mean that Planned Parenthood workers know they’re killing actual human beings and profiting from it.

Harris said, “Let’s just give them all the violence, it’s a person, it’s killing, let’s just give them all that,” admitting that “we [pro-lifers and abortion providers] might actually both agree that there’s violence in here.” Other Planned Parenthood high-level employees featured in the video admit the same, and others have admitted this in the past, as well. When Harris declared, “Ask me why I come to work everyday,” there were audible murmurs on the recording.

It’s likely that Harris “come[s] to work everyday” because abortions are so lucrative — particularly when body parts of slain babies are sold to procurement agencies and researchers, and Planned Parenthood admits that a “fair amount of income” can be made doing this.

Planned Parenthood talks up the idea of abortion as healthcare, despite its continual downplaying of how large a portion of its business is abortion. In public, Planned Parenthood representatives bend over backwards to deny the humanity of the preborn. The abortion giant and its political supporters also play up its legitimate health services, but neglect to mention that these services have been declining for years, even while the organization’s taxpayer funding has increased.

This is not some suddenly new revelation from Planned Parenthood. And, unfortunately, the abortion giant still continues to slaughter innocent preborn children through what can accurately be described as “violence.”

Planned Parenthood has acknowledged the humanity of the preborn in videos previously released by the Center for Medical Progress. Dr. Savita Ginde, Vice President and Medical Director of Planned Parenthood of the Rocky Mountains, referred to an aborted child as “a baby,” while the child’s body parts were sifted through to be harvested.

Former Planned Parenthood employees spoke to Live Action in videos released earlier this year, stating that the abortion giant is aware it’s not merely aborting “clumps of cells,” but is aborting developing children who have recognizable body parts, which Planned Parenthood has sold to human tissue procurement agencies.

These admissions aren’t new. In 2013, Live Action News contributor Sarah Terzo compiled a list of quotes from abortionists who admit that abortion is killing. A Planned Parenthood employee was included on that list.

If only today’s post-Roe abortion profiteer Planned Parenthood were more open about being honest and admitting what it knew in 1952, and what its current top employees know to be true. In these rare moments of candor, it is revealed that Planned Parenthood knows exactly what it is doing, but continues to profit from committing more abortions than any other business in the nation.