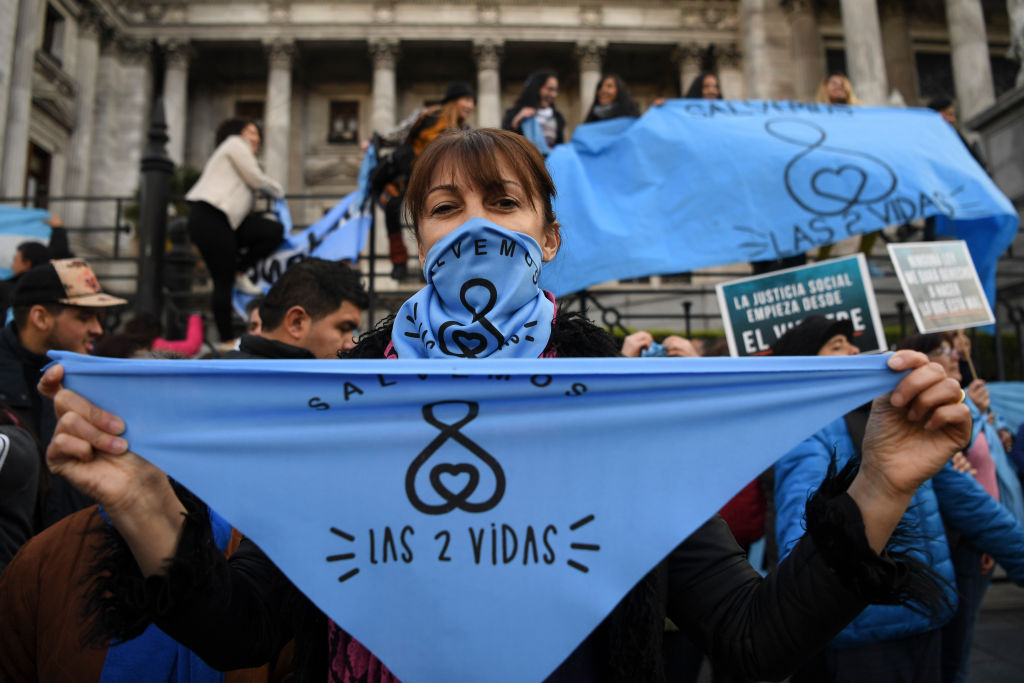 The pro-life message has been gaining traction across Latin America these past few years in a movement known as the “Light Blue Wave.” The movement began in August 2018 after the Argentina’s Senate rejected a bill in a 38-31 vote that would have legalized abortion on demand. Pro-lifers gathered in huge crowds outside sang, danced, and set off fireworks when they heard the results, because life had won in Argentina.

In the months leading up to the vote, pro-lifers sought to “mobilize [people] by the millions,” holding massive meetings and collecting more than a million signatures in opposition to abortion. They chose the color blue to represent their movement – the color of Argentina’s flag and the country’s official religion, Catholicism. Marches were also organized, and more than three million diverse groups of people came together to stand for life in an inspiring sea of light blue.

Abortion proponents struggled to break past the Blue Wave that had risen up in Argentina, obtaining only 70,000 signatures on their petition in favor of legalized abortion. When the abortion activists learned they had lost the vote, they reacted with violence in the streets.

Abortion advocates’ desire to see the procedure legalized could not dispel the country’s value for life at all stages. As pro-life activist Camilo Duro informed writer Johnathon Van Maren, 60% of Argentinians oppose abortion in all cases. This dedication to the preborn made Argentina the perfect starting point for the Light Blue Wave, a movement that flooded across multiple Latin American countries as countless pro-lifers gathered to defend unborn lives.

The Blue Wave poured into Guatemala’s capital in September 2018 when activists began pressuring the government to expand abortion access by weakening the country’s existing abortion laws. Over 20,000 pro-lifers marched in favor of upholding legal protections for preborn humans, carrying photos of children in the womb and holding up signs in support of Guatemala’s pro-life laws.

Abortion advocates were left disappointed when the movement successfully persuaded Guatemala’s government to maintain its commitment to protecting life. This is not the first time the country has fended off an attempt to reverse its pro-life stance.

In 2017, a Dutch ship operated by the pro-abortion organization Women on Waves was blocked by Guatemala’s military. The organization’s goal was to take Guatemalan women into international waters to give them abortion pills. The ship left after the army explained that Guatemala valued “human life and the laws in effect in our country.”

A Guatemalan resident asked the ship’s crew, “Why don’t you go to the Netherlands to kill children?” hinting at the pro-abortion ‘ideological colonization’ so frequently pushed upon developing nations by wealthier, Western nations.

Around the same time Guatemala was considering loosening abortion restrictions, the Dominican Republic was attempting to legalize abortion. The country is one of the few places in the world to have a complete ban on abortion. On September 9, the Blue Wave entered the capital and gathered in front of the National Congress.

The demonstration took place under a “Let’s Save Both Lives” theme, with participants arguing that abortion not only takes the life of an innocent human being, but exacerbates the problems it claims to resolve, such as teen pregnancy and maternal mortality rates. Pro-lifers were successful again, as abortion remained illegal in the Dominican Republic.

Chilean pro-lifers partnered with the members of Argentina’s Light Blue Wave to lobby legislators and stop efforts to legalize abortion up to 14 weeks in the country. A massive crowd of people peacefully gathered outside the National Palace, including a group of pregnant women who used bullhorns to broadcast the sound of their babies’ heartbeats before a crowd of people standing in solidarity for the unborn and their mothers.

The Blue Wave’s efforts to share the preciousness of new life with the public has been victorious so far in preventing the expansion of abortion in the country. While Chile is one of the most pro-life countries in the world, it is under continual pressure to radicalize its abortion laws.

The Chilean pro-life movement has managed to resist these attacks so far, recognizing that abortion merely leaves many women emotionally wounded and deprives them of their children.

Ecuador’s National Assembly sided with the preborn in September 2019 when they voted against legislation to decriminalize abortion in cases of rape or an adverse prenatal diagnosis. This came after thousands of Ecuadorians marched against the proposed bill and gathered outside the legislature where the vote took place. Abortion proponents reacted to the results of the vote by hurling rocks at police and throwing burning torches at the parliament building.

“[A]bortion cannot be the answer that a civilized society gives to the pain and anguish of women, men and their families,” Archbishop Alfredo José Espinoza Mateus of Quito said. “Talking about abortion as a solution is a painful irony… abortion cannot be a ‘solution’, it is a drama, a failure of every society.”

Abortion advocates were dismayed again this year when Mexico’s Supreme Court dismissed a bill to decriminalize abortions in Veracruz. Pro-lifers were pleased children would continue to be safe. While abortion activists claimed the Veracruz’s abortion prohibitions are “discriminatory” against women, these laws protect an entire class of humans from being targeted for destruction.

The Light Blue Wave has helped safeguard the rights of countless unborn children. The steady stream of voices speaking for the defenseless against radical abortion has allowed more families to be saved from the horrors of abortion in Latin America.