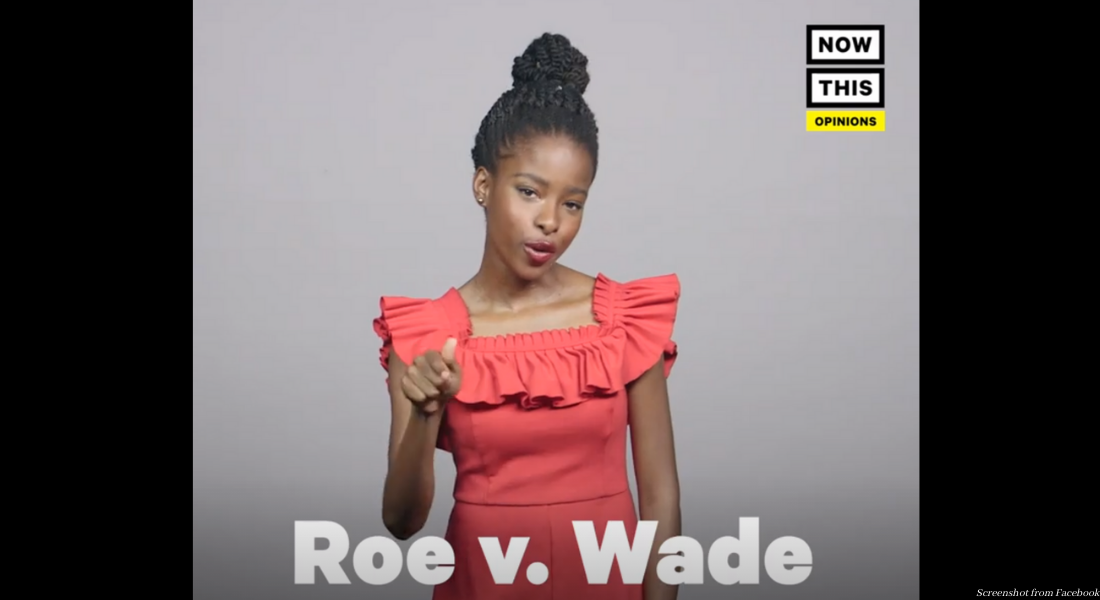 Amanda Gorman is, without question, an impressive young woman. She is the first Youth Poet Laureate of the United States, and has read her poetry for a wide variety of audiences, ranging from the Library of Congress to MTV. What makes her success even more incredible is that she used poetry to overcome a difficult array of disabilities: a speech impediment, auditory processing disorder, and hypersensitivity to sound. She has been open about her struggle to speak, and caused the nation to fall in love with her when she spoke at Joe Biden’s inauguration. But this brilliant young poet is also an ardent supporter of abortion, and a pro-abortion poem she shared in 2019 is going viral again.

Gorman wrote the poem for NowThis, and since the inauguration, it’s been shared again and again. Titled “8 REASONS to stand up today against abortion bans in the United States,” Gorman attempts to argue that restrictions against abortion make no sense, and that abortion must be legal. Her attempt is certainly catchy, but it is lacking in some important facts.


The assertions she makes in the video are below:

1. Let’s get this straight. When the penalty for rape is less than the penalty for abortion after the rape, you know this isn’t about caring for women and girls. It’s about controlling them.

2. Through forcing them into motherhood before they’re ready, these bans steadily sustain the patriarchy, but also chain families in poverty and maintain economic inequality.

3. Pregnancy is a private and personal decision and should not require the permission of any politician.

4. For all time, regardless of whether it’s a crime, women have and will always seek their own reproductive destinies. All these penalties do is subdue women’s freedom to get healthy, safe services when they most need them.

5. Fight to keep Roe v. Wade alive. By the term ‘overturn’ Roe v. Wade the main concern is that the Supreme Court would let states thwart a woman’s path to abortion with undue burdens. But one thing is true and certain.

6. These predictions aren’t a distortion, hypothetical, or theoretical. Women already face their disproportion of undue burdens when seeking abortions. If the sexes and all people are to be equal abortion has to be actually accessible and not just technically legal.

7. Despite what you might hear, this right here isn’t only about women and girls. This fight is about fundamental civil rights. Women are a big part of it but at the heart of it are freedom over how fast our families grow goes farther and larger than any one of us. It’s about every single one of us.

8. Fight for Roe v. Wade in the United States because this change can’t wait. We’ve got the energy, the moment, the movement, and the thundering numbers. The alt-right’s biggest blunder is that most Americans aren’t under their impression that a woman’s body is up to them to decide.

So when you’re outraged, these lawmakers are terrified. They want our tide to lose hope, to back up, pack up, and go home, so don’t. We don’t. We are never alone when we fight fire with feminism. So go, be unafraid. We will not be delayed. We will not be masquerade to the tale of a handmaid. We will not let Roe v. Wade slowly fade because when we show up today we’re already standing up with the tomorrow we made.

Sadly, Gorman’s well-phrased poem is a collection of repeated, tired talking points from the abortion industry, most of which have little basis in reality.

A pregnancy resulting from rape is an extremely difficult situation in which a woman needs significant support, but killing an innocent party is not a supportive action. Many rape survivors have said that abortion compounded their trauma. Laws putting abortion bans into place in states like Georgia and Alabama, which have some of the strongest pro-life laws in the nation, do not punish women for having an abortion. Instead, the people who are penalized by such legislation are the abortionists who take the lives of preborn children.

Rapists don’t even face the death penalty for their crimes; why, then, should a preborn child who has done nothing wrong receive a death sentence?

Gorman correctly points out that women — and Black women in particular — do face systemic injustice that drives them to feel abortion is their only choice. But this is not an argument in favor of abortion. Instead, it shows that women are still being failed, as abortion does nothing to prevent misogynistic societal obstacles from being overcome or eradicated.

Abortion does the opposite. As long as abortion is legal and easily accessible, then there is nothing to compel businesses, corporations, and governments to change. Why make society more amenable to pregnant and parenting women, when women can just go get an abortion?

Above all, insisting that women need abortion — the ability to kill their own children — in order to be “equal” to men is a grossly non-feminist way of thinking. Women can be and already are equal to men, even if they are mothers. Any society that promotes a woman killing her own children in order to have equal opportunities to a man is misogynist on its face.

‘People will get abortions anyway’

The claim that abortion should be legal because women will seek them anyway to determine their “reproductive destiny” is an extremely weak argument for keeping it legal. By that logic, why put any penalties for crimes into place? Bank robbers will still rob banks, and they’re only seeking their ‘financial destinies.’ People still commit rape and murder, and likely always will, yet we still have laws and penalties against those crimes. Saying “people will do it anyway” is nothing more than an overused logical fallacy.

The youth, the “alt-right” and generations to come

Gorman is also wrong in claiming that the abortion industry has the youth on its side. There certainly are pro-abortion youth activists — like herself — yet there are huge numbers of young pro-life activists. Polling has found that Millennials trend pro-life, and are not only more likely to be pro-life than previous generations, but are also more passionate about their activism. Pro-life student groups outnumber Planned Parenthood groups. Nancy Keenan, the former president of NARAL, noted after one March for Life, “I just thought, my gosh, they are so young. There are so many of them, and they are so young.”

The idea that pro-life activists are “alt-righters” is simply a way of attempting to smear the entire movement, and it’s false. The pro-life movement is made up of religious and nonreligious, all races, and all political parties. Despite widespread opposition in their Party, there are pro-life Democrats who are fighting for life. There are also secular (nonreligious) pro-lifers.

Perhaps the most tragic part of Gorman’s poem is her mention of the “tomorrow” abortion activists will make. Abortion, after all, is depriving entire generations of their tomorrows. And there is absolutely nothing to celebrate about that.