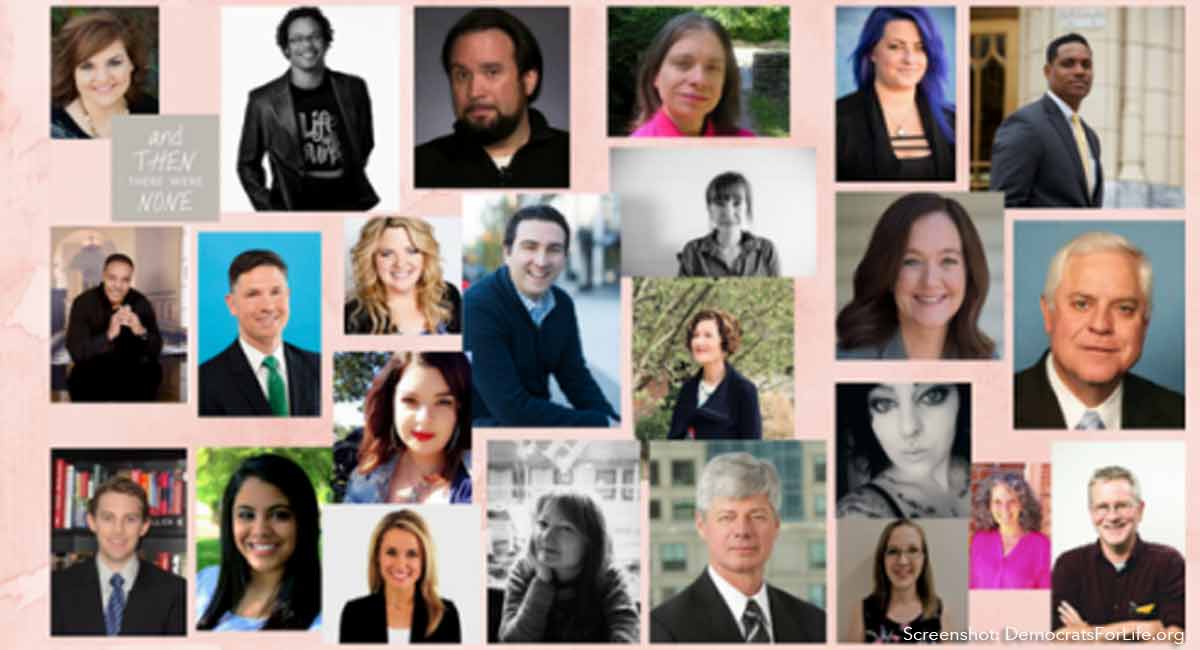 Last weekend, Democrats for Life hosted its inaugural annual conference in Denver. The theme of the conference was “I Want My Party Back,” and it advocated for the approximate 20% of registered Democrats who identify as pro-life. But not everyone was happy about such a conference. One group NARAL Pro-Choice VA tweeted, “So ‘Democrats for Life’ is a thing, and their inaugural conference was sponsored by Live Action (of doctored-Planned Parenthood-sting-video fame). Ugh.” 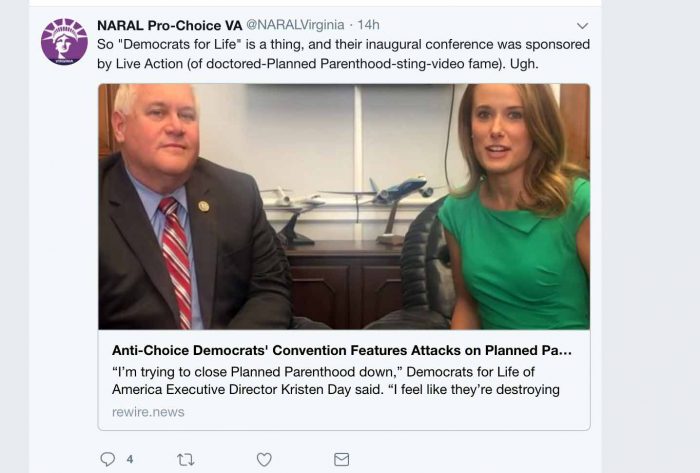 All unfounded assertions about “doctored” videos aside, NARAL Pro-Choice apparently doesn’t know that Democrats for Life isn’t a new organization. It was founded in 1999 — nearly 20 years ago.

Some legislators and members of pro-choice groups also gathered and held a press conference, declaring that Democrats who are “anti-abortion” are not welcome in the Democratic Party, even displaying a billboard that read, “Hey DFLA attendees: Abortion access is a progressive value”:

Calling the current political climate “toxic,” (as evidenced by the video above) and arguing that pro-life Democrats have “compassionate, life-affirming answers,” the DFLA conference website stated:

We recognize the important responsibility that government has to all members of society including the unborn.

We advocate that the government ensure access for all to affordable healthcare, promote family-friendly immigration policies, guarantee equal opportunity and rights for women, provide equal access to a quality education, enforce a living wage, and safeguard the safety-net, social security, and disability programs.

Live Action was a gold sponsor of the conference, and speakers included Ryan Bombarder of The Radiance Foundation, former Congressman Bart Stupak, Democrats for Life Executive Director Kristen Day, post-abortive woman-turned pro-life advocate Albany Rose, former Congressman Lincoln Davis, New Wave Feminists founder Destiny Herndon-de la Rosa, and Congressman Dan Lipinski, who received the “Bob Casey Whole-Life Award.” Alison Centofante, Director of Strategic Communications at Live Action, also spoke at the conference, noting the importance of investigative journalism and how it has the power to change the world, as it did in the coal-mining industry and in mental health care.

Live Action’s undercover investigations follow in the same vein. “In the same way, these videos have been created to show how women are being treated inside of Planned Parenthood and other abortion facilities,” she said. “These are our fellow women, mothers, cousins, and friends. and we should react with horror at the lack of honest, helpful, life-giving information they receive.”

We must also realize that abortion is a part of a global network of abuse; it is often surrounded by other abuses. We have an opportunity to be a part of ending sex trafficking and sex abuse by ending a pivotal part of the abuse cycle – abortion. A report published by the Beazley Institute at Loyola University Chicago documented interviews with sex trafficking victims, girls who survived the worst type of human sex slavery. The girls were asked where they were taken for medical treatment, and they self reported that they were taken to Planned Parenthood most often — and they said Planned Parenthood by name — only second to the emergency room. When asked why, one victim said, “Because they do not ask any questions.” That is a huge problem. This entity is receiving our taxpayer dollars by the millions, making us all implicit in this.

Democrats for Life’s Kristen Day said that she wants pro-life Democrats to leave the conference feeling “mobilized and encouraged.” She said, “When I meet other pro-life Democrats, they often say, ‘I thought I was the only one.’ Bringing like-minded people together is so important to build relationships and momentum for us to work on changing our party to one that is more consistent.”

Tom Peril, a physician and president of Colorado’s chapter of Democrats for Life of America, was responsible for bringing the conference to Denver with the goal of giving pro-life Democrats a voice. “I grew up in a time where the Democratic Party stood for the most vulnerable in our society,” he said. “We want the party back to be the voice for the most vulnerable.” He also spoke about the struggle pro-life Democrats face from both sides of the political aisle. “When I try collaborate with other pro-lifers, I have to overcome the bias against Democrats and be at the table, and when I try to collaborate with Democrats, I have to overcome the bias against the pro-life position,” he said.

The conference offered a scholarship for students with the best essay responses to the prompt, “Many people assert that the term ‘Pro-Life Democrat’ is contradictory. How would you respond to someone who makes this assertion?” The winner was James White, who cited the Democratic Party Mission Statement, which claims to advocate that every person deserves a fair shot. “A Pro-Life Democrat is exactly the type of person who would have the integrity and nuanced perspective to help bridge the divides that plague our politics and society today,” he wrote.

A recent Gallup poll found that over 20% of registered Democrats are pro-life, and even more find it to be morally wrong. Yet the Democratic Party continues to shun pro-lifers, with Democratic National Committee Chairman Tom Perez even saying at one point that supporting abortion is “non-negotiable.” The Democratic Party is turning their backs on millions of Americans who otherwise would support them. It just serves as further proof that the party’s leaders are not actually pro-choice — they’re pro-abortion. Hopefully, Democrats for Life is one step closer to changing that.