After forty-one years of living under Roe v. Wade, the cancerous Supreme Court ruling that declared open season on 56 million innocent lives in the decades since, how well are pro-lifers really faring in our efforts to set things right?

Considering that Roe is indefensible on the merits, was disowned by its own author, and can’t even count on honest scholars who favor its outcome to pretend it’s constitutional, the fact that it still stands today is an undeniable disgrace. The bad news is that we’ve got a lot of work ahead of us in correcting our deficiencies, but the good news is we’ve got a lot to be proud of, and our remaining obstacles are by no means insurmountable.

In 2013, 70 state-level pro-life measures were enacted — making 2013 the second most productive year on record. The report specifically cites Texas, North Dakota, North Carolina, and Arkansas as being especially active in passing pro-life laws. Overall, according to Guttmacher, there have been more pro-life laws passed between 2011 and 2013 than in the entire previous decade.

Guttmacher places each state into one of three categories based on the number of pro-life laws on the books. Unsurprisingly, a majority of “red” states are deemed “hostile” to abortion rights while many “blue” states fall in the “supportive” category. What is interesting, however, is the success of pro-life laws in many “purple” or swing states. Virginia, Ohio, Pennsylvania, and Michigan were all states that Barack Obama carried in both 2008 and 2012. They are also states Republicans hope to win in 2016. Guttmacher places each of these four states in the “hostile” category. 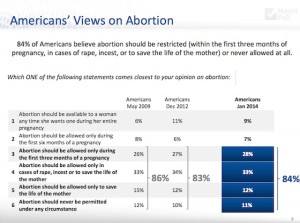 More interestingly, it also shows that 83% of those who identify as moderates on the issue support parental notification and 24-hour waiting periods, and that 58% of middle-of-the-road types think abortion does more harm than good in the long run.

And Marist’s most encouraging revelations are in the graph above. On the core question, whether abortion should be legal at all, a combined majority of 56% take the pro-life stance that abortion should be always illegal or legal only in cases of rape, incest, and/or to save the mother’s life.

If we add the moderate pro-choice stance that elective abortion is permissible only in the first trimester, that gives us an astonishing 84% of the country who think the law should be drastically to the right of both the status quo and the avowed position of the current president, his party, and the abortion lobby. The percent that agrees with the Democrats and Big Choice that elective abortions should stay legal in the second or third trimester? A pitiful 16%. That’s smaller than the 23% we’re always hearing about who would forbid rape abortions. It’s almost impossible to understate how fringe the pro-abortion movement really is.

Yes, the pro-life Knights of Columbus commissioned the poll, but the Marist Institute itself is a respected nonpartisan outfit. Nor are their findings a fluke – this summer, United Technologies/National Journal polling found that, at the height of War on Women 2’sTM scare campaign against 20-week abortion bans, Americans supported such laws 48% to 44%, including 53% of independents, 50% of women, and 52% of 18- to 29-year-olds. And in 2012, Gallup found that 59% of Americans would ban abortion in most or all circumstances, with elective abortion support losing ground across most demographic groups.

From here, the trick is figuring out how to translate those numbers into legal results. On the personal, hearts-and-minds level, pro-lifers are doing an admirable job covering all their bases, from sidewalk-counseling to publicizing the horror of abortion at every turn to supporting crisis-pregnancy services wherever we can. Here we must keep our resolve for helping wherever we can in our communities, striving to remember that even when the law seems intractable, this work still saves lives.

The macro, political level is where we need the most change. In both runs for office and legislative battles, the GOP’s misplaced phobias about abortion messaging are the biggest obstacles to serious reform. When their opponents play the extremist and War on WomenTM cards, too many Republicans succumb to a gripping fear that anything other than changing the subject will cost them their jobs.

And without pushback, pro-aborts’ narrative gains a presumed legitimacy it never would have earned in a real fight, and less informed moderates walk away with the assumption that the pro-lifer is the nutcase with something to hide and the pro-abort is the reasonable centrist – thereby exacerbating the very impressions they fear. Hopefully the following tips will find some more discerning, less easily intimidated minds.

The best defense is a good offense. Marjorie Dannenfelser’s critical assessment of the Virginia governor’s race should be required reading for everyone involved in right-of-center politics. Ken Cuccinelli tried to ignore Terry McAuliffe’s abortion attacks and cling to the fantasy that he could make the election exclusively about the economy, essentially dooming himself to the echo-chamber effect. But research by Dannenfelser’s group, the Susan B. Anthony List, found that a concerted effort to expose McAuliffe’s extremism would have powerfully resonated with women, independents, and undecideds.

The lesson is clear: aggressively, repeatedly, and confidently attack the pro-abort’s true record. Make sure everyone knows exactly what he’s selling. The good news is that forces at the Republican National Convention reportedly want to “reject a strategy of silence” and push GOP candidates to go on offense against the real extremists. But, like most things involving the Republican Party and actual spines, we should wait to believe it until we see it.

Draw the right lessons from your candidate’s screw-ups. When Todd Akin uttered the gaffe heard ’round the world about “legitimate rape” and how women’s bodies “shut the whole thing down,” the problem and its solution couldn’t have been more obvious: don’t say ridiculous things about biology, especially when that biology involves a horrific, emotionally charged crime. Vet your candidates for tendencies toward verbal diarrhea in advance.

So of course, instead of those simple lessons, scores of geniuses in the party establishment and elite commentariat decided that the pro-life part was the problem. Why? Because pro-aborts in the press screamed a lot that it was. Hopefully, at least a couple of them were able to muster enough brain cells to notice that Mitt Romney won Akin’s home state, meaning voters were smart enough to recognize the difference between being pro-life and being an idiot.

Start truly respecting the Constitution. The GOP claims to revere the Constitution, but many of them don’t. Not really. Not when the extent of your reverence is lip service and refraining from actively trying to violate it.

Genuine love for the heart of American law would be protecting it from rulings that eviscerate it, so the timidity with which politicians who know better tolerate atrocities like Roe needs to be considered nearly as egregious an affront as Roe itself. But it persists because Republican politicians tend to value the appearance of decorum more than the values of law and justice that decorum is supposed to serve. Earlier this month, Daniel Horowitz of RedState perfectly summarized the problem:

When Democrats are in power they leave no stone unturned in shifting all the district and appellate courts to the left.  Yes, indeed, they have litmus tests for their nominees.  When Republicans are in power, they search from someone who is “qualified” and has a nice legal resume.  Some of them turn out to be strict constitutionalists, but inevitably others follow the Souter model.  Moreover, most Republicans adhere to this same standard of “qualification” when deciding whether to oppose Democrat nominees.  Hence, almost every judicial circuit is filled with judges who fabricate law instead of following the Constitution as it was originally conceived.

It’s time Republicans develop their own litmus test for judicial nominees […] If a nominee does not believe in the Constitution as it was written, they are not qualified to serve, irrespective of their meritorious achievements both in and out of their legal career.  Understandably, it is often hard to extract definitive views from nominees, especially if they haven’t ruled on important subjects like gay marriage, but Republicans need to get more aggressive.  They need to be 100 percent clear about the views of the perspective nominee on the important issues percolating through the court system.  Democrats expect that level of clarity from their vantage point, so Republicans must follow the same standard.

The same is true for abortion. Democrats have relentlessly hammered into the conventional wisdom the idea that judicial nominees must defer to Roe’s status as “settled law,” a farce that both of the last Republican SCOTUS nominees took disturbingly seriously. Replace the respect that farce gets with the contempt it deserves, and future nomination battles will look very different.

All of this advice is ultimately dependent on something that’s far easier said than done: finding backbones in Washington, D.C. But one way or another, find them we must. Lives are at stake.