A foundation whose billions reportedly came as a result of distributions from hedge fund manager Bernard “Bernie” L. Madoff, who operated a Ponzi scheme (defined as “a fraudulent investment operation where the operator, an individual or organization, pays returns to its investors from new capital paid to the operators by new investors, rather than from profit earned through legitimate sources) which made some people very wealthy while bankrupting newer investors, is now funding the nation’s largest provider of abortions: Planned Parenthood. According to 990 tax records filed online, JPB Foundation, which Forbes once called “one of the top 40 foundations by asset size in the nation,” has contributed millions to Planned Parenthood in the past few years, making them one of the largest donors to the abortion corporation: 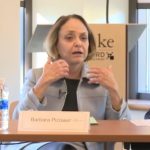 In addition, the JPB Foundation, which accrued its money thanks to fraud, contributed large sums of money to pro-abortion groups like the Clinton Foundation, the ACLU, the Center for American Progress, the Guttmacher Institute, and the Center for Reproductive Rights, to name a handful.

Barbara Picower, president of the philanthropic foundation, is, according to Forbes, “the widow of the biggest beneficiary of the Bernard Madoff Ponzi scheme… with more than $2 billion in assets.”

A report published in the Miami New Times described the JPB Foundation as “a philanthropic organization founded by Barbara Picower, the widow of the biggest beneficiary of Bernie Madoff’s Ponzi scheme, after she agreed to pay $7.2 billion to Madoff’s victims.” Forbes notes that Picower has “more than $2 billion in assets” and notes that Barbara’s now-deceased husband, Jeffry Picower, had “received a net of $7.2 billion in distributions over the years from Bernard L. Madoff Investment Securities.”

One other interesting surprise: Planned Parenthood’s president, Cecile Richards, sits on the JPB Foundation‘s board! Mystery solved as to how Planned Parenthood is scoring so many millions from this organization that profited from defrauding people.

JPB’s president, Barbara Picower, identified by Inside Philanthropy as one of the nation’s most powerful women in philanthropy, joins the ranks of other radical abortion funders like Melinda Gates, co-chair of the Bill and Melinda Gates Foundation; Carol Larson, president and CEO of the Packard Foundation; and Susan Buffett, chair of the Susan Thompson Buffett Foundation and the Buffett Early Childhood Fund. 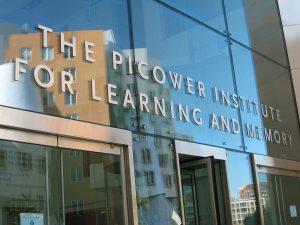 Picower has been a longtime advocate of abortion. Prior to her husband’s passing and before the Madoff scandal, in 1999, Barbara gave $250,000 to the National Abortion and Reproductive Rights Action League through her Picower Foundation. In 2002, Picower also gave NARAL $750,000 and donated to Planned Parenthood then as well.

JPB Foundation has also been credited with funding projects for The Bixby Center for Global Reproductive Health. Live Action News has preciously reported that the Bixby Center trains abortion providers though its Ryan Residency Training Program, providing “ob-gyn residents the opportunity to develop clinical and research skills in abortion and contraception,” and claiming to have “doubled the number of programs addressing these critical women’s health issues.”

In a lecture sponsored by The Center for Strategic Philanthropy and Civil Society (CSPCS), earlier this year, Barbara Picower admitted that the JPB Foundation uses family planning — or as some would call it, “population control” — to fight poverty. In a video of her talk, Picower seemed to hold a disparaging view of pregnant women and teen girls, painting them as helpless without the support of a “male.”

“If a 15-year-old woman has two kids and no male support, that young woman doesn’t have a clue about how to get out of poverty unless she’s standing on the corner like the film, Pretty Woman, and a rich Richard Gere comes by and rescues her.

“But, that’s not what is going to be logical for that child. So, we feel that making sure that children — until they can be responsible for raising children — and helping them get the required birth control that they need. And God forbid that they need an abortion that they don’t have to go through the hoops and made to feel horrible that they did that…”

Once people learn what abortion truly is and does, it’s hard not to feel horrible about it…

Pushing abortion and birth control (a.k.a. family planning) on the poor is nothing new for those like Planned Parenthood and friends, whose belief system is steeped in a eugenics philosophy. In Margaret Sanger’s “Birth Control and Racial Betterment,” the Planned Parenthood founder linked the goals of eugenics with the goals of promoting birth control, writing (emphasis added):

We who advocate Birth Control, on the other hand, lay all our emphasis upon stopping not only the reproduction of the unfit but upon stopping all reproduction when there is not economic means of providing proper care for those who are born in health. …While I personally believe in the sterilization of the feeble-minded, the insane and syphilitic, I have not been able to discover that these measures are more than superficial deterrents when applied to the constantly growing stream of the unfit… Eugenics without Birth Control seems to us a house builded upon the sands. It is at the mercy of the rising stream of the unfit…. 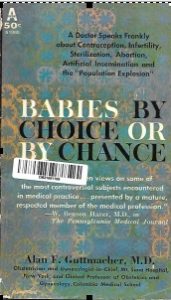 Babies by Choice or By Chance, by Alan F Guttmcher

Dr. Alan F. Guttmacher, once vice president of the American Eugenics Society, and one-time president of Planned Parenthood who established the Guttmacher Institute, advocated that if families did not limit births to just two children, then compulsory methods of population control could become necessary. Guttmacher also admitted to the New York Times in 1969 that many leaders sitting on Planned Parenthood’s board were in favor of coercive measures of population control.

In his 1959 book, “Babies by Choice or By Chance,” Guttmacher claimed the atomic bomb would be “kinder to future generations” than “the explosion of the population bomb.” He bemoaned the fact that death rates were decreasing, while birth rates were on the rise, writing, “[I]f we want to decelerate the rate of population growth, it must be done by conception control.”