But when an organization bills itself as an expert in reproductive health, the public has a right to expect factual information from that organization. That’s why a 2005 “special analysis” from Rachel Benson Gold, Guttmacher’s VP for Public Policy, is so disturbing. Though Guttmacher published this piece 12 years ago, it is extremely relevant to the continuing debate over issues like abortifacient contraception — and extremely deceptive. Titled, “The Implications of Defining When a Woman is Pregnant,” the article warns that claiming a woman is pregnant before the living embryo implants in her uterine wall (endometrium) — even though that child is already alive — is a dangerous thing to do.

Gold muses, “The question of when life begins is an eternal one, debated by philosophers and theologians for centuries, and likely destined to forever elude consensus.” Right away, we can see the difficulty in trusting this source; the very first sentence, and Guttmacher’s VP is already conflating the issues. While philosophers and theologians may debate endlessly on when life begins, scientists already know when life begins. Dr. Donna J. Harrison, M.D., executive director of the American Association of Pro-Life Obstetricians and Gynecologists (AAPLOG), takes issue with Gold’s claims, telling Live Action News, “It is a well established biological fact that a new unique human organism begins his or her existence at the moment of sperm egg membrane fusion,” adding that this “takes seconds, not 24 hours,” unlike what Guttmacher’s VP claims in her piece.

The American College of Pediatricians released a statement in March 2017, also affirming that life begins at fertilization:

The predominance of human biological research confirms that human life begins at conception—fertilization.  At fertilization, the human being emerges as a whole, genetically distinct, individuated zygotic living human organism, a member of the species Homo sapiens, needing only the proper environment in order to grow and develop. The difference between the individual in its adult stage and in its zygotic stage is one of form, not nature.

Guttmacher’s VP goes on to claim that even though we can’t define when life begins, we can define pregnancy as “when a fertilized egg has been implanted in the wall of a woman’s uterus.” Okay, let’s back up and clarify a few terms here: what Gold calls a “fertilized egg” is actually no longer an egg at all. It’s now known as a zygote, and if the mammal carrying this zygote is human, then the zygote is human — a new, living human being with his or her own distinct DNA. That unique DNA, distinct from his mother’s and father’s, has been present from the instant of fertilization (amphimixis). Dr. Harrison of AAPLOG adds, “At the moment of sperm egg membrane fusion, neither the sperm nor the egg exist any longer. What exists is a new entity…. The embryo continues to develop and if given support and nourishment will continue through the full spectrum of human existence from embryo to fetus to newborn to child to adolescent to adult.”

In a section called, “When is a Woman Pregnant,” Gold claims (emphasis mine), “Implantation of the preembryo [another questionable term, often used by the ACOG, IVF specialists, and pharmaceutical companies with a vested interest in potentially abortifacient birth control or the ability to discard test-tube created embryos] in the uterine lining begins about five days after fertilization. Implantation can be completed as early as eight days or as late as 18 days after fertilization, but usually takes about 14 days.” 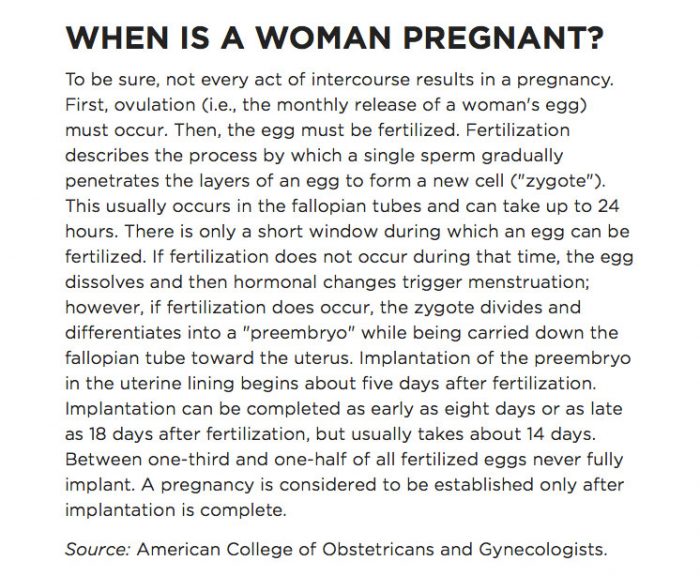 But this claim that implantation can happen as late as day 18 — or even in an average of 14 days — is not accurate or widely accepted. In fact, though Gold claims her source for this information is the American Congress of Obstetricians and Gynecologists, the ACOG itself actually states, “At about 8–9 days after fertilization, the cluster of cells (now called a blastocyst) attaches to the lining of the uterus.”

Dr. Harrison of AAPLOG told Live Action News, “It is a well established biological fact that the human embryo implants 5-8 days after being brought into existence at fertilization. This implantation takes place approximately one week before a woman misses her period.” The University of New South Wales’ embryology database puts implantation’s completion at 9 days. A 1999 study in The New England Journal of Medicine states that in “most successful human pregnancies,” implantation occurs “8 to 10 days after ovulation.” So it seems that the average of these sources puts implantation at approximately 8 days after fertilization.

Why, then, would Guttmacher’s VP make it sound as if it takes a full two weeks (or even longer) for a woman to actually be considered pregnant — under their own definition — when other medical sources state that implantation occurs 5-10 days earlier than what is claimed in the Guttmacher article? Could this misinformation come from a desire to convince women that the morning-after pill and other forms of hormonal, potentially abortifacient contraception aren’t really destroying human lives, when such contraceptives do actually have this potential?

Furthermore, if the ACOG and Guttmacher don’t consider a woman to be technically pregnant until the developing child implants fully into the uterine wall, then nothing important must really be happening until this point, right? Wrong! According to the Endowment for Human Development (EHD) — a self-described “nonprofit organization dedicated to improving health science education and public health” which has worked with National Geographic to produce a documentary about human life in the womb — within the first 24-48 hours, a hormone called “early pregnancy factor” (EPF) can be found in the mother’s blood. EHD notes that “[t]his substance helps prevent the mother’s immune system from rejecting the soon-to-be-implanted embryo and allows pregnancy to proceed.” Yes, you read that correctly: there’s a hormone termed “early pregnancy factor” present, even though certain organizations don’t even consider a woman to be officially “pregnant” until days later. At the same time, the newly-created child is not static, but dynamic – rapidly developing and traveling toward implantation.

Guttmacher and the ACOG have moved the goalposts, so to speak, regarding the beginning of pregnancy — but the new human being is alive and growing well before implantation in the uterine wall. AAPLOG’s Dr. Harrison says the idea pushed by Guttmacher — that “law and science has long recognized the ACOG definition of pregnancy beginning at the completion of implantation” — is “patently false.” Harrison told Live Action News, “The ACOG definition of pregnancy was promulgated in 1967, and established in the courts, not in medical science. For at least the past 200 years, science has recognized that mammalian life begins at fertilization, and the lay term for fertilization is ‘conception’. To date, medical dictionaries still define the term ‘conception’ as beginning at the moment of sperm egg fusion.”

He who defines the terms wins, as they say. And the ACOG and Guttmacher have tried to redefine when pregnancy actually begins. AAPLOG’s Dr. Harrison told Live Action News, “Th[is] Guttmacher article is a remarkable example of journalistic attempts to spin biological facts into something palatable for the American public….”

Dr. Harrison is right. And Guttmacher’s VP admits as much, writing:

… [M]any in the antiabortion movement clearly understand the modes of action for contraceptive methods, especially the hormonal methods…. Understanding that, they have to know that the end result of enforcing a definition that pregnancy begins at fertilization would implicate not just some hormonal methods, but all of them.

And of course, that’s the point.