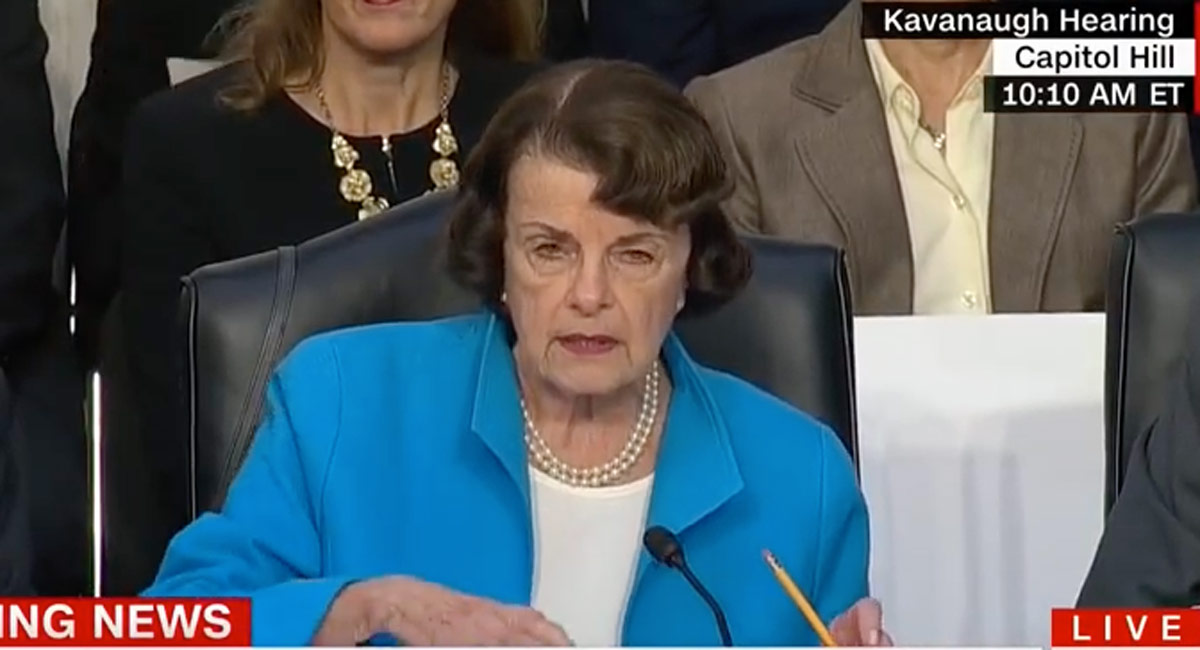 When even mainstream media calls out a pro-abortion senator, you know the error must be huge. That’s what’s happening to Senator Dianne Feinstein (D-Calif.), after she made an outrageously erroneous claim about the number of abortion deaths prior to the 1973 Roe v. Wade decision legalizing abortion nationwide. Yesterday, at Senate hearings for Supreme Court nominee Brett Kavanaugh, Feinstein stated, “In the 1950s and 60s, the two decades before Roe, deaths from illegal abortions in this country ran between 200,000 and 1.2 million. That’s according to the Guttmacher Institute.” Only… it isn’t.

A spokeswoman for Sen. Feinstein, Ashley Schapitl, said Feinstein “meant to cite just the number of illegal procedures, not deaths,” according to USA Today. While it is certainly possible that Feinstein misspoke, it wouldn’t be out of the norm for an abortion proponent to fabricate statistics on abortion deaths prior to Roe.

Quite regularly, pro-abortion individuals claim that thousands of women died from abortion before it was legal. Numbers given usually range from 5,000-10,000 annually. But even this much smaller number than Feinstein’s is completely false — and the men who fed that number to the media have admitted it. Still, this complete lie persists, and is trotted out regularly by supporters of legal abortion.

Live Action News’ Carole Novielli writes of Dr. Bernard Nathanson, founder of the pro-abortion group NARAL (later, a pro-life convert), who was the source of the falsified figure:

Nathanson added, “There were perhaps 300 or so deaths from criminal abortions annually in the United States in the sixties, but NARAL… claimed to have data that supported a figure of five thousand.” Guttmacher concurs with the 300 figure.

Novielli notes in a different article that while “In 1930, the Guttmacher Institute claimed abortion was the ‘official cause of death for almost 2,700 women,'” that number continued to plummet — largely attributed to “the introduction of antibiotics in the 1940s,” and by 1965 was down to “approximately 193” annually — well before Roe v. Wade was forced upon the nation in 1973.

Not only that, those so-called “back alley” illegal abortions that we so often hear about were actually done by… drumroll, please… “reputable physicians.” (The “back-alley” phrase actually refers to the back entrances of physicians’ offices used by women seeking illegal abortions.) Novielli writes, “Past Planned Parenthood president Alan Guttmacher admitted to the Harvard Crimson in 1967 that ‘Seventy per cent of the illegal abortions in the country are performed by reputable physicians, each thinking himself a knight in white armor.'” This claim was supported by Planned Parenthood’s then-president, Mary Calderone.

Laurie Higgins of the Illinois Family Institute noted in response to Feinstein’s comments:

As for the illegal abortions themselves (not the deaths from such procedures), those numbers are not actual, but estimates. Abortion proponent Larry Lader wrote in his 1966 book, “Abortion,” that a 1957 “conference of experts sponsored by Planned Parenthood Federation estimated that US abortions could run from 200,000 to 1,200,000 annually,” prior to nationwide legalized abortion. [HT: Carole Novielli]

Oddly enough, USA Today claims abortion deaths pre-Roe may have been much higher than “officially reported” numbers, yet seems oblivious to the fact that, with only half of U.S. states required to report abortion complications, the same is quite possibly happening today — with legal abortion.

Abortion proponents seem willing to do or say just about anything to make sure women can continue to legally (and not necessarily safely) kill their children in America. But Feinstein and others like her aren’t really helping women at all. Abortion has not helped women’s status in society. It didn’t help them before it was legal, and it doesn’t help them now.