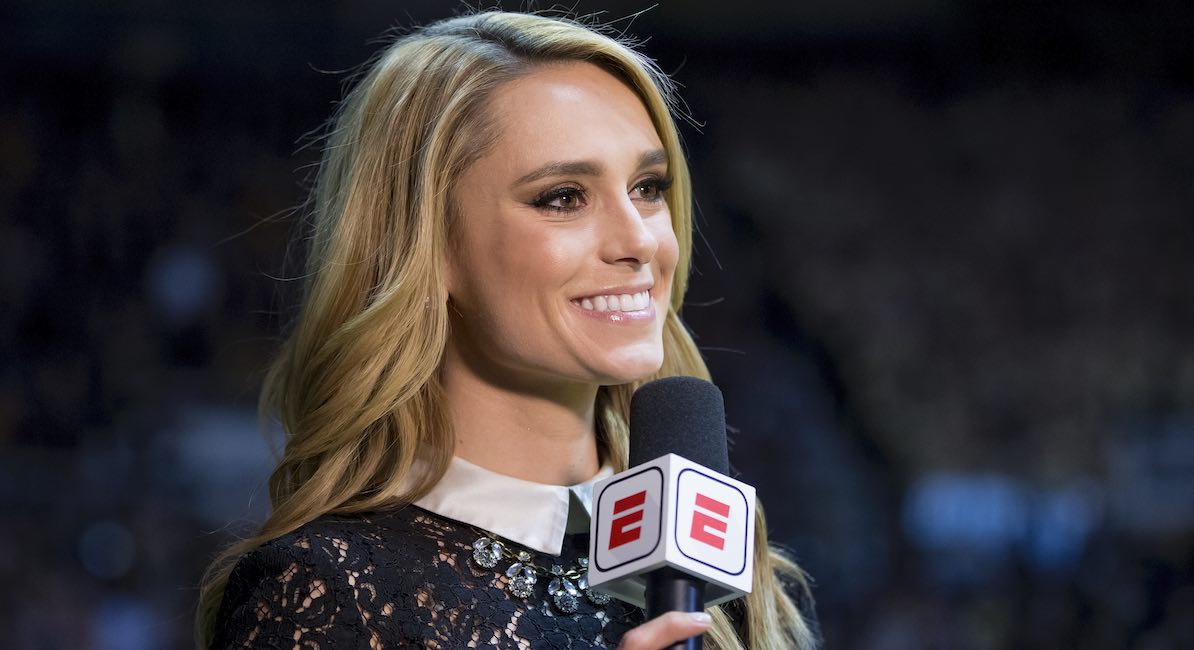 ESPN reporter Molly McGrath has joined the growing list of on-air pregnant women who have been body-shamed by viewers. She fired back at the rude commenters and hopes to show other young women that they can have both a career and a family, and should never be shamed for it.

“Last night I was on my feet for over 6 hours straight, in the rain, and knew that I would only get 3 hours of sleep because of a last second flight change,” McGrath wrote on Instagram:

For the first time, maybe ever, I let a cruel troll tweet about the changes of my pregnant body get to me. […] I am making a HUMAN LIFE! The baby I’m carrying around could live outside of my body right now, and my strong ass body made that baby from scratch. […] I feel so incredibly lucky to have a job that I’m so passionate about, it makes me forget that a little human is kicking my ribs. I am proud to be a pregnant woman working full-time and I am proud that the magnitude of creating a human life has not, and will not, slow me down. Women are freaking incredible and powerful and anyone who doesn’t see that can kiss my big achey butt. 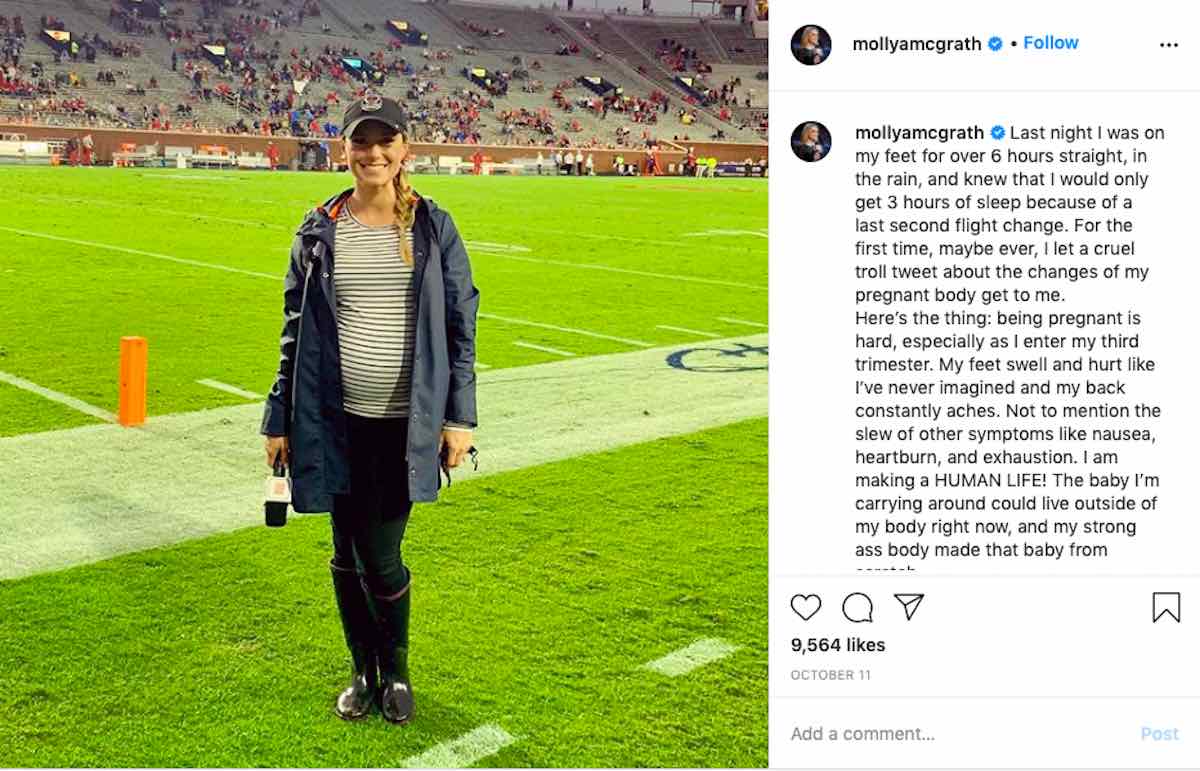 McGrath is not the first broadcaster to have viewers comment on her pregnant body. Houston news anchor Erica Simon was shamed during her 2018 pregnancy. “Some of the viewer comments about my pregnancy are starting to get annoying,” she wrote. “Yes, I’m aware I’m petite so the sudden packing on of pounds is a startling sight. No, I’m not having twins and no I’m not due any day. I’ll update you as I go, but chill.”

Talitha Vickers from WXII 12 in Winston-Salem, North Carolina, tweeted in support of Simon. “You keep living your best life and don’t go back and forth with these viewers,” she wrote. “Trust me I know… I was pregnant anchoring WITH twins and maaaan they came for me too.” She later said that the experience reminded her, “A child is a blessing from God. No need to ever feel shame! Ignore tactless people. My support outweighs the knuckleheads.”

McGrath told Yahoo!Life that when she first became pregnant, she was nervous to announce her happy news because she was concerned about how being pregnant might affect her career. Sadly, this is how many women feel and those concerns can build into pressure to abort. Fears about losing their jobs or a promotion because of pregnancy are real among women despite the fact that laws exist to protect them. In 2019, Nike was accused of dropping athletes when they became pregnant, causing them to lose their paychecks and their health insurance. Google has also been called out for discriminating against pregnant women.

For McGrath, the pressure to choose between children and career escalated during the COVID-19 pandemic. 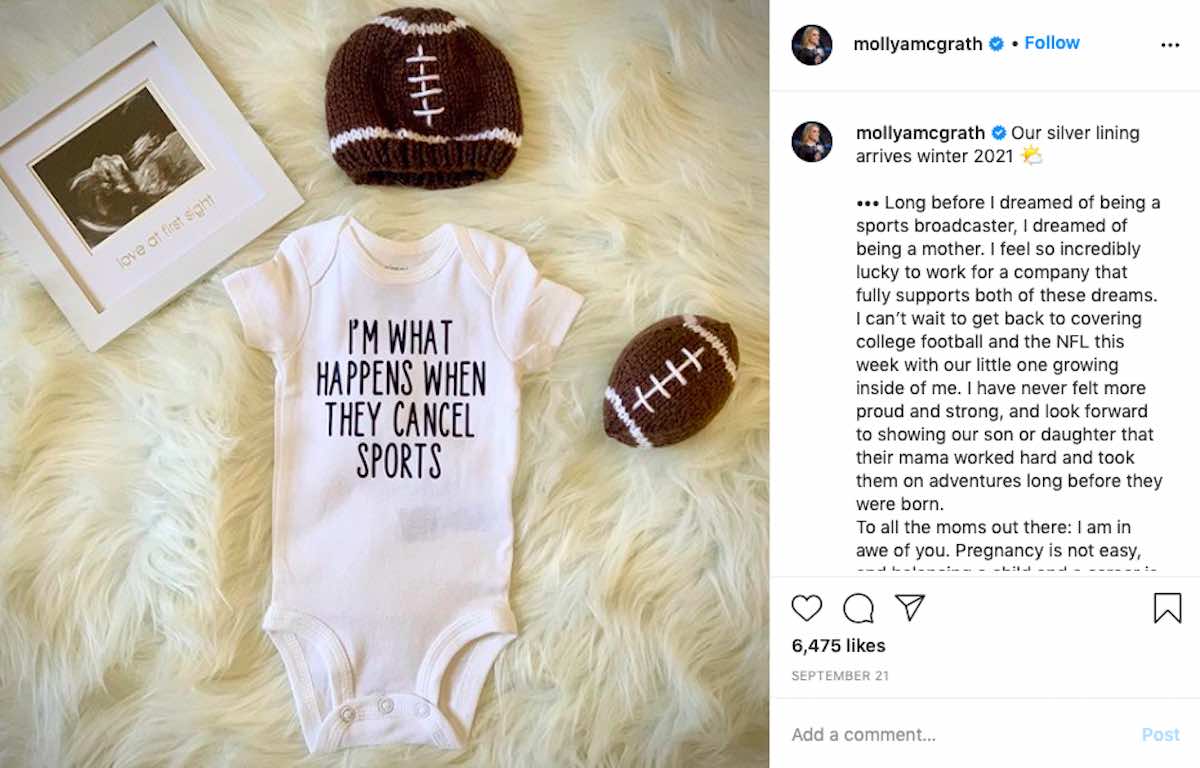 “Especially now during the pandemic, women’s place in the workplace is threatened as more and more mothers are balancing work, childcare and even homeschooling,” she said on Instagram. “It’s been disheartening to see that just as it did decades ago, the household responsibilities fall solely on so many women, making a career nearly impossible.”

However, she said she has received nothing but support from ESPN.

“I don’t want women to hide anymore if they don’t want to,” she said, in reference to the practice of pregnant on-air broadcasters only being filmed from the chest up. “I want young women to see me on TV and know that you can have a successful career and a family.

She added that other female sports broadcasters including Shannon Spake, Kris Budden, Laura Rutledge, and Allison Williams “inspire” her. “[They] give me confidence that I, too, could have both a career and a family. I’m just hoping that I can pay it forward and do the same for other women in the industry.”