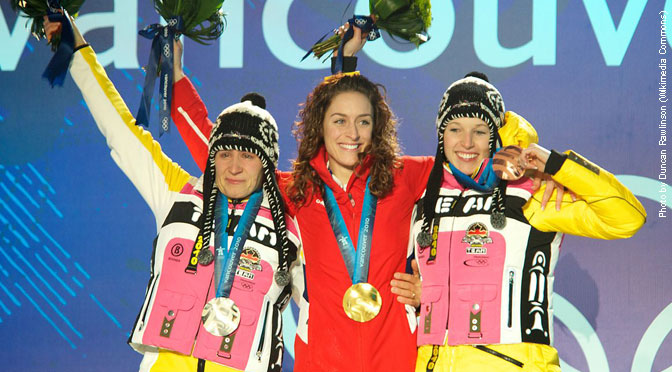 Have you ever seen a pregnant Olympian? Likely, you have and never even knew it.

“Some of the strongest women are moms.” I’ve heard this said often, and I agree. My next thought is “some of the strongest women are Olympians.” Who doesn’t sit there watching the television, imagining what it would be like to be as dedicated and courageous as these athletic competitors? I’ve DVR-ed my favorite women competing so that I can watch it over and over again. I don’t want to forget how inspired I am over the capabilities of women my age or younger who do not give up.

The video you’re about to watch are these two hero components combined: the Mom & the Olympian. Watching these women will bring tears to your eyes. The world so often heralds, “Choose one: Choose the dream. Or choose the child. But you can’t have both.” This lie has been at the heart of the American Dream (aka American Façade) since the 1950’s. And I love the demolition of a big, fat, nasty lie.

So in the celebration of the demolishment of this age-old propaganda, let’s take a look at the women who prove that dreams of amazing careers, Olympic medals, and limitless goals go best with bringing Life into the world.

Juno Stover-Irwin
Diving, 1952
A forerunner for all women in the 1950’s, Juno was 3 1/2 months pregnant when she won the Bronze for diving for the United States. She is also the 1st U.S. diver to compete in 4 Olympics.

Khatuna Lorig
Archery, 1992
Four months pregnant and took the Bronze in archery. Khatuna also trained Jennifer Lawrence in archery for her role as Katniss in The Hunger Games.

Lisa Brown-Miller
Hockey, 1998
Lisa’s team would rub her 2 month pregnant belly before their games in sweet celebration of their extra team member. They won Gold.

Anky Van Grunsven
Dressage, 2004
Anky was four months pregnant while competing. She still holds the record for “the most medals won by an equestrian athlete.”

2010 was a huge year for women carrying babies while competing in the Olympic games. Here are a few of the many:

In 2012 during the London summer olympics, beach volleyball champ Kerri Walsh Jennings discovered that she was five weeks pregnant, and that same year, Malaysian air rifle shooter Nur Suryani Mohd Taibi was nearly eight months pregnant when she competed, earning her the title of “most pregnant Olympian ever.” And there are others from years past who have competed while pregnant.

Are you wondering which of the Rio Olympians are carrying both their children and their careers at the same time? Well, so did quite a few of the news media outlets.

The Sydney Morning Herald reported that Puerto Rican volleyballer Diana Reyes’ is 4 months pregnant. She found out the news in the hospital recovering from a car crash days before flying to Rio to join her teammates for the games. She competed and was quoted saying that she was “super happy, because I’ll be a mum and I’m here (in Rio).”

USA Today wanted to cover Olympic moms who have birthed and raised children in the midst of their competitive careers. They reported yesterday:

…Yet, across the Rio Games, amazing women are doing exactly this without the celebrate-this-from-rooftops full fanfare they deserve. We’re talking, of course, about Olympic moms. By competing post-pregnancy, the likes of self-declared “Momma on a Mission” Dana Vollmer, a swimmer, are showing that having children and a continuing career in elite sport need not be mutually exclusive. That freedom to not have to choose either one or the other is important in encouraging women to compete for longer and later into their lives.

Olympic swimmer Dana Vollmer went on to explain in USA Today’s article, “I was told that you can never get your body back,” Vollmer says. “I wanted to show that you can. I think it will keep women in sports much longer, that you can have family and you can make it work.”

These Olympic moms showcase for the entire world the miracles of the human body inside and outside of the womb. They are displaying the  truth that we are created for more than just one role. They are bringing to light that we are fashioned for multiple purposes and giftings. And most beautifully, in these women, we see that you do  not have to choose between a child or a career. It can powerfully be both and together.