On May 13, 2022, the Department of Homeland Security issued a memorandum entitled “Potential for Threats to Public Safety in Response to Abortion Debate,” explaining that the leak of the draft Supreme Court decision to overturn Roe v. Wade “prompted a significant increase in violent threats—many made online via social media and some of which are under investigation—directed toward some US Supreme Court Justices and the Supreme Court building.” While the DHS has not been specific about which “side” the extremists are on, Live Action News has extensive research exposing the extremists as pro-abortion activists.

The DHS document continued, “The volume of violent threats targeting Supreme Court Justices, members of Congress, other public officials, clergy, healthcare officials and providers, and others associated with the abortion debate are likely to persist and may increase leading up to and following the issuing of the Court’s official ruling.”

The bulletin also referred to the National Capital Threat Intelligence Consortium, which confirmed at least 25 violent threats have been shared with partner agencies for further investigation. “Some of these threats discussed burning down or storming the US Supreme Court and murdering Justices and their clerks, members of Congress, and lawful demonstrators,” said the consortium. 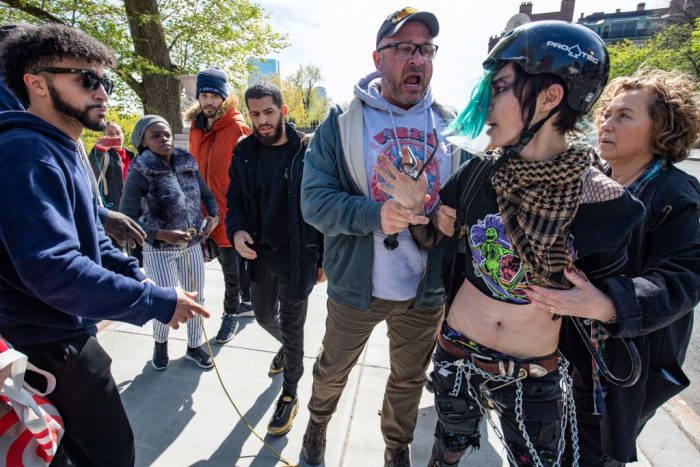 Plainclothes Boston Police officers arrest a pro-choice demonstrator (2nd R) that attacked pro-life speakers (L) from Christ Forgiveness Ministries outside the State House during a Pro-Choice Mother’s Day Rally in Boston, Massachusetts on May 8, 2022. – Multiple US organizations that support abortion rights called for nationwide protests on May 14, after a leaked draft opinion showed the US Supreme Court was poised to overturn its landmark Roe v. Wade decision. (Photo by JOSEPH PREZIOSO / AFP) (Photo by JOSEPH PREZIOSO/AFP via Getty Images)

ABC News also reported that a senior DHS official had a phone call with state and local partners on Monday afternoon warning of the extremist’s plans to “incite violence amongst their supporters.”

Since the leak of the Supreme Court’s draft opinion in the Dobbs v. Jackson Women’s Health Organization suggesting the likelihood of Roe v. Wade being overturned, pro-life facilities have been vandalized, burned, defaced, firebombed, and attacked. Catholic churches have been invaded and bomb threats have emerged. Pro-life individuals have been emotionally and physically assaulted, spat at, egged, and harassed.

In addition, abortion supporters have been rioting in cities with protestors throwing rocks and bottles at police and carrying signs that read, “Burn our rights, we burn ur state,” as previously reported by Live Action News.

The pro-abortion group, Rise Up 4 Abortion Rights, which previously planned a “Week of Action” beginning on Mother’s Day, has now declared May 26th as “Shut Down the Country Day.” These extremists say, “We will make it clear to the woman-haters on the Supreme Court and everywhere else that if they take away the right to abortion, their society will be prevented from functioning at all. We will NOT go back.”

Mike Sena, president of the Nation Fusion Center Association recently told CBS News, “A lot of what we have been seeing has been implied threats without specific locations.” He continued, “People can have extreme ideologies, there’s nothing wrong with that. But it’s the discussion of violence, death and destruction that we’re concerned about.”

A DHS spokesperson said the department is “committed to protecting Americans’ freedom of speech and other civil liberties, including the right to peacefully protest,” according to CBS news. But these protests have been less than peaceful and show no signs of letting up.