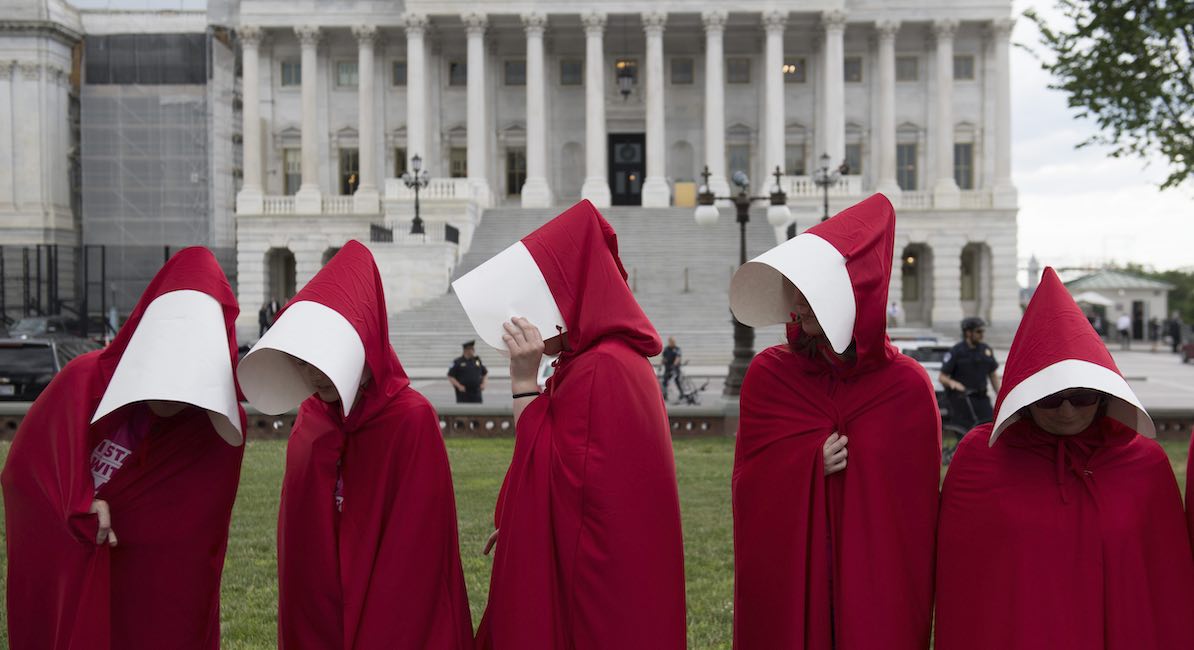 Protests began organizing as a group of radical activists gathered in front of the Supreme Court building soon after Politico revealed the opinion draft written by Justice Alito. In addition to protesting outside of churches, activists plan to gather at the homes of the conservative justices. According to Fox News, police have erected a fence around the building and there is a strong police presence at the justices’ homes.

Rise Up 4 Abortion, whose slogan is “Abortion on demand and without apology,” has planned an entire “week of action” beginning on Mother’s Day, May 8. The group calls for action outside of churches while wearing “Handmaid’s Tale” outfits in protest. The group is encouraging activists to “chalk your town” and put up posters on Monday. On Tuesday, the group will “green out” landmarks and statues with large pieces of green fabric to represent support for abortion, and are calling on graffiti artists to leave their mark, as well. Wednesday will involve mass banner drops over freeways that are expected to remain in place for days or weeks. Thursday has been deemed “National Student Walk-Out” day. The group is asking high school students to collectively walk out of school in support for abortion rights and even hold a rally on their school campus. The group has entitled Friday as the day for a “National Die-In.” According to their website, “This form of street theater dramatizes the grim realities of what happens when abortion is not easily accessible or legal – women die.”

READ: Polling shows 7 out of 10 women are in favor of significant abortion restrictions

Brian Burch, president of Catholic Vote, made a statement on Thursday, saying, “In the wake of the shameless leak of a draft opinion of the Supreme Court, pro-abortion groups are now threatening to disrupt Catholic churches and to protest outside the homes of Supreme Court justices this Sunday.” He continued, “President Biden must immediately and forcibly condemn these domestic terrorist threats… This country was built on freedom of speech and freedom of religion. The President of the United States must stand up for both.”

But no condemnation has come from the Biden administration.

In fact, Jen Psaki, President Biden’s press secretary, was asked about the planned protests at churches, as well the justices’ homes. She did not condemn any portion of the plans. “I don’t have an official U.S. government position on where people protest,” she said, adding, “The reason people are protesting is because women across the country are worried about their fundamental rights that have been law for 50 years, their rights to make choices about their own bodies and their own health care are at risk. That’s why people are protesting! They’re unhappy! They’re scared!”

In response to the threats, Live Action Founder and President Lila Rose, said, “We won’t stand down. Our peaceful, loving movement will continue to help women and families in need, educate them about the violence of abortion, advocate for pro-life laws, and stand for life.”