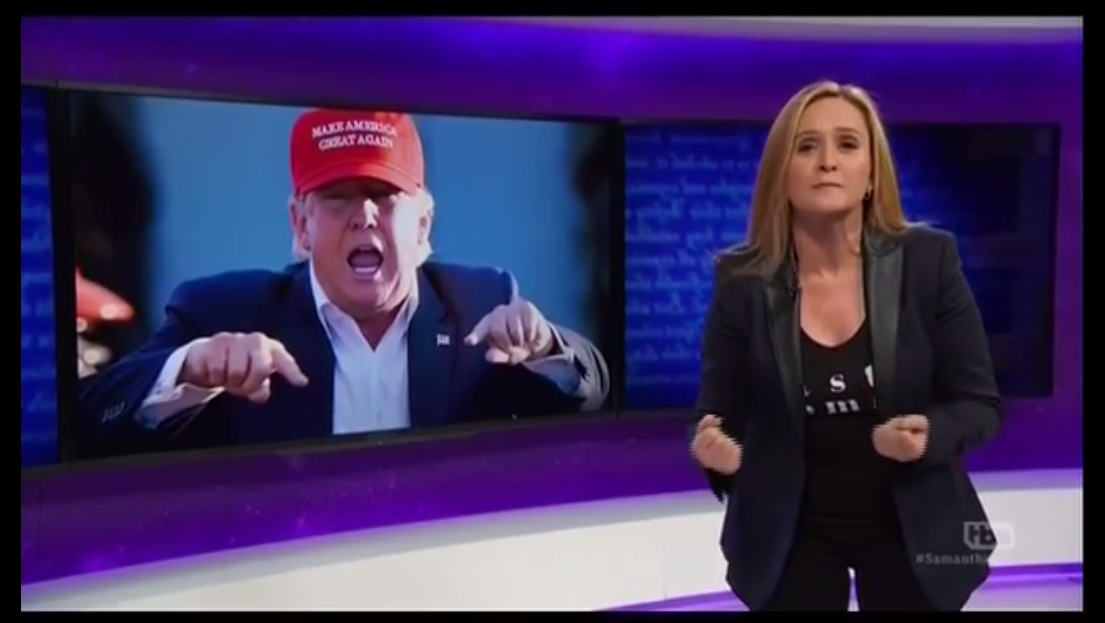 Lying to the public on behalf of lax abortion laws is a cottage industry, but Samantha Bee, host of TBS’s “Full Frontal,” delivers her falsehoods with more smugness than most.

On Monday night, she decided to join the chorus of attacks on Donald Trump’s debate answer about partial-birth abortion, and to be expected, the only thing she successfully demonstrated is the arrested development of the pro-abortion mindset.

Bee opens the abortion part of the segment with some unoriginal snark, saying, “If you were hoping to hear old men talk about vaginas some more, hey! It’s your lucky night!” Weird fixation on whether people are old or male aside, it sure would be nice if just once, Bee had to explain why she and her fellow abortion fans instinctively pretend conversations about preborn babies are conversations “about vaginas.”

If I didn’t know any better, I’d say that almost sounds like a subconscious admission they’re uncomfortable discussing the actual subject…

After a clip of moderator Chris Wallace asking Hillary Clinton about her position on partial-birth abortion, Bee grabs a megaphone and announces, “PARTIAL BIRTH ABORTIONS AREN’T A THING,” with that message emblazoned in all caps on no less than three screens behind her for emphasis. (Because everyone knows that if you say something loudly and in all caps, that makes it automatically true!) She says partial-birth abortion doesn’t exist because… well, that’s not really the medical name for that kind of abortion — and because she thinks that type of abortion was already outlawed in every state. Wrong on both counts:

It’s a non-medical term the National Right to Life Committee made up in the 90s for a procedure that was outlawed in 2003 by the Partial Birth Abortion Ban Act, seen here being signed by George W. Bush, along with some of Congress’s leading women’s health experts [the “joke” being that everyone in the picture is a male Republican, as if – CF].

Sorry, Samantha, but partial-birth abortions certainly are “a thing.” Regardless of who coined the term, it does accurately describe the Intact Dilation & Extraction abortion procedure, which abortionist Warren Hern and the National Abortion Federation both explain as consisting of partial delivery (a.k.a. birthing) of babies before killing them.

And despite the passage of a federal ban, they’re still legal in some states, as Live Action News’ Kristi Burton Brown explains: “… [E]ven though federal law bans most partial-birth abortions (PBA), only 19 states have actually banned the procedure themselves. The federal law bans PBA when it is committed on federal property – such as military bases – or when it involves interstate commerce.” What this means is that “partial-birth abortions could shockingly still be performed in the other 31 states under certain circumstances” and three of the states that ban it only do so “post-viability.”

Not at all. Clinton expressly supports both procedures; she voted against the 2003 ban on partial-birth abortion, and reiterated her stance when the Supreme Court upheld the ban in 2007. Last year, she called the late-term abortion ban (20 weeks)—which contained rape and life-of-the-mother exceptions— “extreme and unacceptable.”

Only 1.3 percent of abortions take place at or after 21 weeks, and guess what? It’s not because women are selfish sluts who wake up in their third trimester and decide, “not into this; I want a procrast-abortion!” It’s usually because the tests done at that point reveal a fatal birth defect or serious risk to the mother’s life.

Bee’s source for this claim must be “the authority of one who has a uterus,” because she sure didn’t get it from hard evidence. Last year, FactCheck.org concluded, “there is no definitive information as to how many of those abortions are due to medical necessity,” and last week I showed you there is anecdotal evidence—from D&X (partial-birth) abortion creator Martin Haskell and late-term abortionist George Tiller’s own words—that only one in five, or fewer, late-term abortions are done for complications to either mother or child’s health.

But even if Bee was telling the truth, this would be nothing more than padding out a paper-thin case, because neither Wallace nor Trump suggested anything about how rare late-term abortions are or why they’re sought…and while 1.3% may be “rare” in the relative sense, it doesn’t mean “few”—we’re still talking about 13,000 children killed per year. Former abortionist Anthony Levatino describes a late-term induction abortion below:

Next, Bee sneers that Trump’s language about “rip[ping] the baby out of the womb” sounds “a lot like Trump has confused abortions with bear attacks,” and that “Donald may not understand how abortion works.” Tough talk from someone falsely claiming partial-birth abortion “doesn’t exist” when simply describing a D&X abortion would confirm that’s exactly what it is.

Bee’s closing statement gives a “hell yes” to Clinton’s insincere and inaccurate posturing that slaughtering children is a matter of women’s “personal health decisions,” then makes a suggestion to men (gotta love the sexist assumption that women must already agree with her):

Men, if you don’t get why it’s important to have a woman as a major party nominee, check your social media feed, actually, log in as your wife. You’ll see that all week, women have been sharing deeply personal stories of pregnancies that went wrong.

One can’t help but wonder how Bee would try to change the subject to candidates’ chromosomes if, say, Carly Fiorina had been on stage hitting Hillary with the exact same message, but I digress…

Bee flashes the headlines of several “deeply personal stories” on screen…two of which Live Action News has specifically addressed; one wasn’t even an abortion, while the other failed to explain “how a 32-weeker in utero wouldn’t feel pain, while a born one of the same age would.”

The third doesn’t specify the complication beyond that doctors “kept saying” her baby “would not be anywhere near okay,” but quotes one doctor as saying “there is always a chance” her baby could be healthy… and doesn’t explain why giving the little girl that chance wasn’t worth it.

The profanity-laden fourth story is a heartbreaking account of losing a wanted child to a near-fatal case of preeclampsia… but again, the “termination” in this case sounds like a delivery rather than an abortion, and claims:

Donald, what you described last night literally never happens. EVER. Nope, not once. Not ever. In EVERY SINGLE CASE of pregnancy termination done in the final trimester of pregnancy it is because the mom is dying or the baby’s condition is incompatible with life.

The author describes this blatant falsehood as “motherf***ing reality.” So yes, Samantha, please tell us more about the unimpeachable authority of “deeply personal stories.”

The truth is that Samantha Bee and the rest of the abortion lobby’s pop-culture foot soldiers can’t find vindication from the realms of science, argument, emotion, or personal stories.

Behind the veneer of condescension and sarcasm, they have nothing.