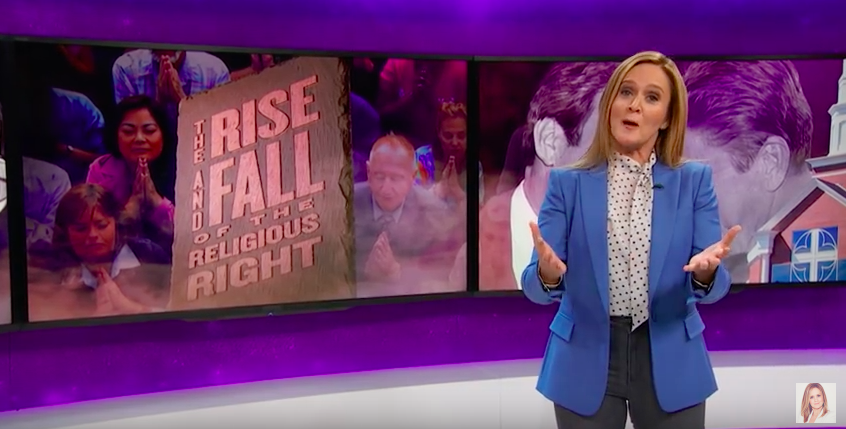 Samantha Bee has an unhealthy obsession with the pro-lifers. On her late-night program, Full Frontal with Samantha Bee, she’s focused on attacking the pro-life movement no less than twice in May alone.

Earlier in May, she teamed up with Patton Oswalt ad pro-abortion figures to denounce crisis pregnancy centers. Her attacks were based on anecdotal evidence from biased sources, as is a more recent segment in which Bee attempts to mischaracterize all pro-lifers as on the right of the political spectrum, or as religious. And, of course, it’s all for laughs.

Bee, who begins her sketch posing as a reporter claiming to have been present when seven male Supreme Court justices “found” that abortion was protected under the Constitution’s so-called right to privacy, giving the country Roe v. Wade and Doe v. Bolton. In reality, Bee was not yet four years old when Roe and Doe were decided.

Bee sought to denounce the idea that the “Religious Right” came out of the 1973 decisions, because the justices were Republican appointed and from one statement from one group, the Southern Baptist Convention. The group claimed that “religious liberty, human equality and justice are advanced by the Supreme Court abortion decision.” The SBC has since changed its course.

Because of this, Bee’s reporter character figured the debate would be settled. To much laughter from the audience, Bee asked “all right, who wants to have unprotected sex?” Right, because women must love getting pregnant, just so they can have an abortion.

It wasn’t until a few years later then that Jerry Falwell and Paul Weirich “mobilized” voters on abortion, “to keep the moving going.” Bee mocked the start of the process, wondering if they “were founding a movement or deciding what toppings to get on their pizza?”

As is an expected pattern from Bee, the anecdotal evidence comes from filmmaker Frank Schaeffer, described as “a talented young sci-fi film maker.” He claimed to “back in the day… help found, start, begin what became known as the pro-life movement, through Whatever Happened to the Human Race.” Schaeffer shares that “it is the single greatest regret of my life.”

Bee includes what are arguably creepy clips. But, more creepy than those clips, which goes over Bee’s head completely, are the ways in which abortion causes the death of a preborn human being.

People change their minds. Imagine that. Plenty have also changed their minds who previously supported abortion, to now coming out against it. While we’re talking about founding movements, one of them, the late Dr. Bernard Nathanson, who helped found NARAL and was involved in over 75,000 abortions. Not surprisingly, Bee makes no mention of him as a sort of contrast.

There are also people every day, whatever their role in life, who have changed their minds on abortion. Live Action recently released a video of some of those people.

Later in her clip, Bee refers to “feverish anti-abortion rhetoric.” Actually, if anyone has “feverish… rhetoric,” it’s the abortion movement. Nathanson has admitted many of the talking points from the beginning of the movement were “some sexy, catchy slogans to capture public opinion.” And Live Action News has debunked “the my body, my choice” mantra.

And of course to Bee that means “rhetoric” translates into violence. “It’s no surprise,” she claims about this “rhetoric,” that it has “divided many from their own sanity.” Bee is speaking of the Soldiers of God, a violent fringe group with which the pro-life movement does not affiliate itself.

On the screen appears statistics, which, in very faint font, notes they just happen to be from Bee’s friends at the National Abortion Federation, about violent incidents occurring from 1977-2015. To more laughter, Bee mentions it’s, “you know, pro-life stuff.”

Another thing that is given no mention? The violence from those who support abortions, particularly when it comes to women who are coerced into abortions. This is sadly not surprising considering how much the media neglects such stories to begin with.

The clip closes with a vocal pro-life man protesting abortion on the street corner, whom Bee laughs off as one of “the thousands inspired to be super annoying a**holes.” The man who mentions that “the Holy Bible is against abortion,” which Bee claims it is not.

If only pro-aborts followed through on that logic when it comes to the Constitution, which doesn’t actually mention abortion either, or privacy for that matter.

Watch the clip below: