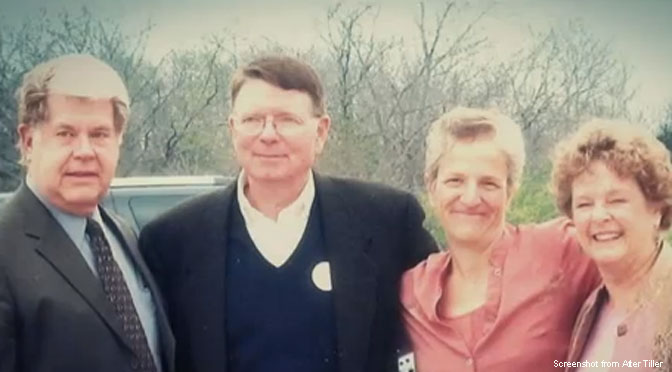 Seven years ago Monday, George Tiller was murdered. It was a horrific tragedy that was roundly condemned by the pro-life community, and rightly so. Being pro-life means respecting and protecting all life; violence against anyone, even abortionists, goes against everything that the pro-life movement stands for.

The murder of George Tiller does not, though, excuse his work as an abortionist while he was alive. And true to form, abortion advocates have spent the last few days talking about Tiller as if he was a champion of women. This is stretching the truth, at very best.

Rewire featured a story on Tiller to commemorate the anniversary, one lauding him as a hero:

Among abortion rights supporters, and especially among his colleagues in the close-knit abortion provider community, Dr. Tiller was a beloved hero, legendary for the kindness and compassion he extended to desperate women who came to him from all over the United States and abroad.

This post also pushed the false narrative that late-term abortions are performed mostly out of medical necessity or because of fetal abnormalities.

Glamour used the anniversary to spread the narrative that pro-lifers are violent and angry. Planned Parenthood also took the opportunity to use his death as a means to further their own agenda, boasting of how they’re carrying on his “noble” work:

And let’s be clear: these are not easy procedures. Dilation and evacuation abortions, performed in the second trimester, can be done on babies that are viable. And they are gruesome, violent procedures. These babies, who can feel pain, are ripped apart limb from limb. This is the work that Tiller did.

Tiller has admitted to performing abortions on babies up to 36 weeks of age, most of which were perfectly healthy. For these babies, Tiller would inject a fatal dose of digoxin into the baby’s heart and then induce labor, so that women could deliver their dead children. After he killed the babies, he would dispose of them in the full-sized crematorium he had in his clinic.

It wasn’t just preborn babies that suffered at Tiller’s hands, though. While abortion advocates like to make him out to be a champion of women, former patients of his say otherwise. They told stories of forced abortions, of the callous way Tiller would demand thousands of dollars and use the threat of higher abortion fees to get women to go through with the procedure. Women would have to pay up to $30,000 for an abortion at Tiller’s hands, and he would hang that number over their heads — better go through with the abortion now, because each day you wait, the price will go up another $500! Another patient recounted giving birth to her baby alive, but Tiller killed the baby rather than give the required medical care. Before he died, Tiller was also being investigated for performing illegal abortions.

Then there was Tiller’s staff. He employed people like the now-notorious LeRoy Carhart, who has killed multiple patients, and Kristin Ann Neuhaus, a woman who was stripped of her medical license for giving shoddy care to women, performing illegal abortions, and forced abortions. One of the patients that Carhart killed, Christin Gilbert, was a patient at Tiller’s clinic. She suffered for days, receiving horrific and substandard medical care before ultimately succumbing to the injuries she sustained during her abortion.

Regardless of the atrocity of what George Tiller may have done in his lifetime, his death is still a tragedy. Every human being has value and dignity. Every human being also has potential. What would have become of Tiller’s life had he not been murdered? Hearts and minds are changed every day through the compassion and kindness of the pro-life community; had people reached out to him with love in their hearts, would it have been possible for Tiller to have changed his mind? And what kind of difference would it have made if he had? How powerful would that conversion have been?

There are very few people in the pro-life movement who will argue that Tiller’s murder was anything but a tragedy. It was an inexcusable act of violence, and his killer should be in jail for the rest of his life. But the heinous crime that took his life does not whitewash the work Tiller did while he was alive. Performing late-term abortions is not kind, compassionate, or heroic. He wasn’t a champion of women. Late-term abortion is barbaric and cruel, and the tragic circumstances of his death will never change that.