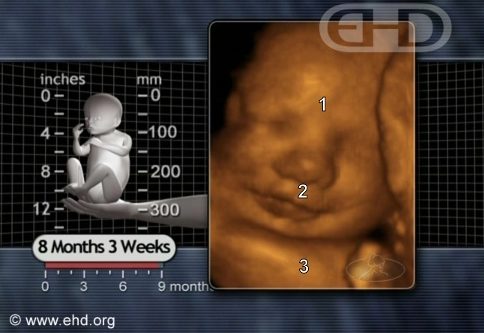 What’s not surprising? That whenever attention is drawn to the abortion movement’s extremism, the media will lie about it. Washington Post “fact-checker” Glenn Kessler took issue with Trump’s statement, “in the ninth month you can take the baby and rip the baby right out of the womb, just prior to the birth of the baby,” claiming “[t]hat doesn’t really happen”:

Most abortions take place early in the pregnancy. One-third take place at six weeks of pregnancy or earlier; 89 percent occur in the first 12 weeks, according to the Guttmacher Institute, which supports abortion rights. Only 1.2 percent of abortions—about 12,000 a year– take place after 21 weeks. (The Supreme Court has held that states may not prohibit abortions “necessary to preserve the life or health” of the mother.)

On top of that, Guttmacher says that 43 states already prohibit some abortions after a certain point in pregnancy, such as fetal viability, in the third trimester or after a certain number of weeks. So this is already a rare procedure that is prohibited in much of the country.

It shouldn’t take a supposedly-professional fact-checker to miss the most egregious problem with Kessler’s spin: he’s putting words in Trump’s mouth and correcting those rather than analyzing what Trump actually said. Here is Trump’s entire partial-birth abortion answer:

And honestly, nobody has business doing what I just said. Doing that as late as one or two or three or four days prior to birth. Nobody has that.

Trump never suggested partial-birth or nine-month abortions were common. He didn’t say a word about their frequency. His only point was that they can be done, and Clinton is not opposed to it—both of which are true. Nor did Trump speculate or generalize as to the reasons why some women seek these gruesome abortions.

As Live Action’s Kristi Burton Brown pointed out this morning, seven states outright allow abortions up to the final day of pregnancy. More to the point, even though the rest of the country may theoretically draw the line earlier, in practice the Supreme Court mandates “health exceptions” in the third trimester that are defined so broadly that abortions can be justified for whatever pretext an abortionist can conjure up.

And boy, do they conjure. In 2013, Live Action News’ Sarah Terzo detailed third-trimester abortionist Susan Robinson admitting there were women who sought her services not for deadly illnesses threatening themselves or their babies, but because they “didn’t know they were pregnant” for “one reason or another”; and George Tiller admitting that only 800 of the 10,000 late-term abortions (less than ten percent) his office performed from 1990-1995 were for fetal anomalies.

By the way, even “fetal anomalies” can be misleading. While abortion apologists deploy it to give the impression they’re only talking about desperate situations like anencephaly, late-term abortionist Warren Hern—who pro-aborts endorse as representative enough of the field to be lionized in the documentary After Tiller—identifies dwarfism as one of the “fetal abnormalities” for which he offers his lethal services.

But it is not possible to speak with certainty about who undergoes “intact D & E,” as the “partial-birth abortion” is known in medicine. The federal government does not collect such information. Physicians do not have to report it to state health departments.

Researchers do not study the question or publish their findings in medical journals.

Interviews with doctors who use the procedure and public comments by others show that the situation is much more complex. These doctors say that while a significant number of their patients have late abortions for medical reasons, many others — perhaps the majority — do not. Often they are young or poor. Some are victims of rape or incest.

Really puts in perspective how far downhill WaPo’s fact-checking has gone, doesn’t it?

Abortionist Leroy Carhart was taped admitting that he often performs elective late-term abortions at 26 weeks “or more.” Martin Haskell, the pioneer of partial-birth abortion, was once taped acknowledging that 80 percent of abortions after 20 weeks were “purely elective.”

The evidence comports with Haskell’s claim. The pro-life Charlotte-Lozier Institute, using data from medical literature and late-term abortion providers, found that the majority of these procedures are not performed for “maternal health complications or lethal fetal anomalies discovered late in pregnancy.” The pro-abortion Guttmacher Institute found that in “many ways, women who had later abortions were similar to those who obtained first-trimester procedures.” Which is to say convenience.

Finally, all of the above does apply to Hillary Clinton’s own position. In last night’s debate, she stated she was standing up for cases where women found out “their health is in jeopardy if they continue to carry to term,” or “something terrible has happened or just been discovered about the pregnancy,” but as I’ve documented here and here, she has condemned both the federal partial-birth abortion ban and the 20-week abortion ban as extreme and dangerous, even though both bills contained exceptions for risks to the mother.

Some other public comments from Clinton — declaring “government should have no role” in restricting abortion, and calling partial-birth abortion a “fundamental right” and “complex and highly personal” decision — make abundantly clear that Clinton does not support what she has called “reasonable kinds of restrictions.”

For trying to pass off blatant straw-manning as checking facts, we give Glenn Kessler and the Washington Post four Pinocchios.