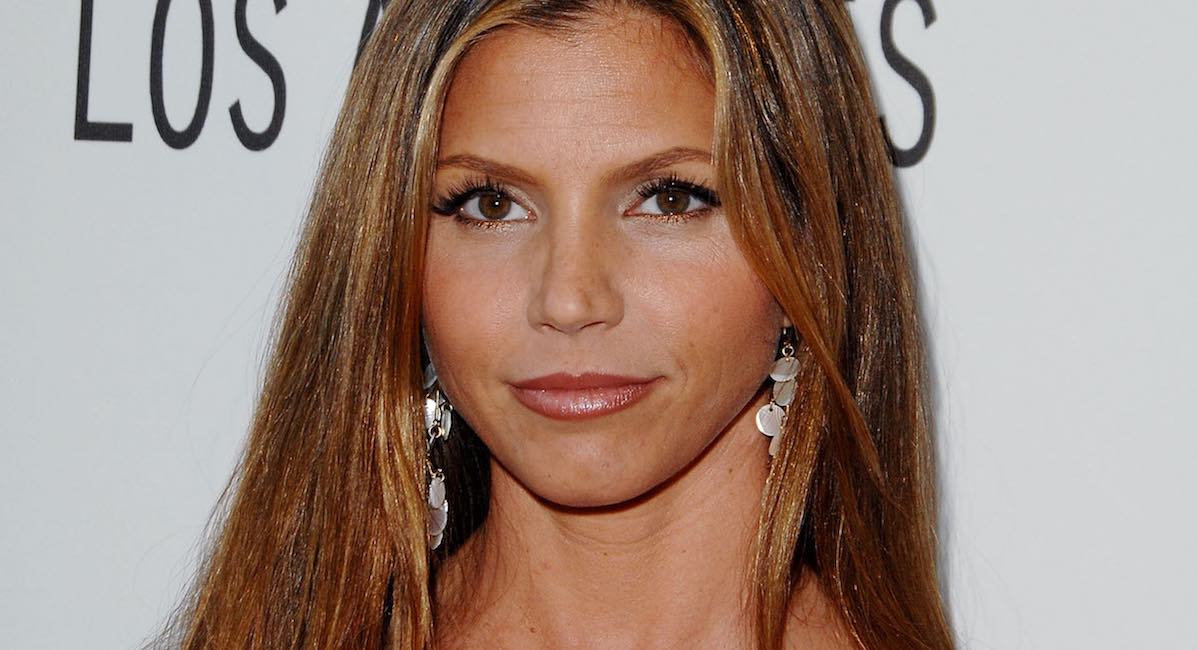 Actress Charisma Carpenter has come forward with allegations of abuse against “Buffy the Vampire Slayer “and “Angel” creator Joss Whedon just months after actor Ray Fisher accused Whedon of racist conduct. Carpenter said Whedon’s behavior toward her years ago traumatized her, and says she suffered mistreatment because of her pregnancy and her religion.

“Joss Whedon abused his power on numerous occasions while working together on the sets of Buffy the Vampire Slayer and Angel,” wrote Carpenter. “While he found his misconduct amusing, it only served to intensify my performance anxiety, disempower me, and alienate me from my peers. The disturbing incidents triggered a chronic physical condition from which I still suffer. It is with a beating, heavy heart that I say I coped in isolation and, at times, destructively.”

Carpenter said Whedon used repeated “passive-aggressive threats” of firing her, and called her “fat” to colleagues when she was pregnant. She also claims he would “berate” her about her rosary tattoo, which she said helped her to feel more “spiritually grounded in an increasingly volatile work climate that affected me physically.”

After Carpenter learned she was pregnant, her agent informed Whedon, who in turn requested a meeting with the actress.

“In that closed-door meeting, he asked me if I was ‘going to keep it’ and manipulatively weaponized my womanhood and faith against me,” said Carpenter. “He proceeded to attack my character, mock my religious beliefs, accuse me of sabotaging the show, and then unceremoniously fired me the following season once I gave birth,” even though Carpenter’s pregnancy was worked into the show’s plot. 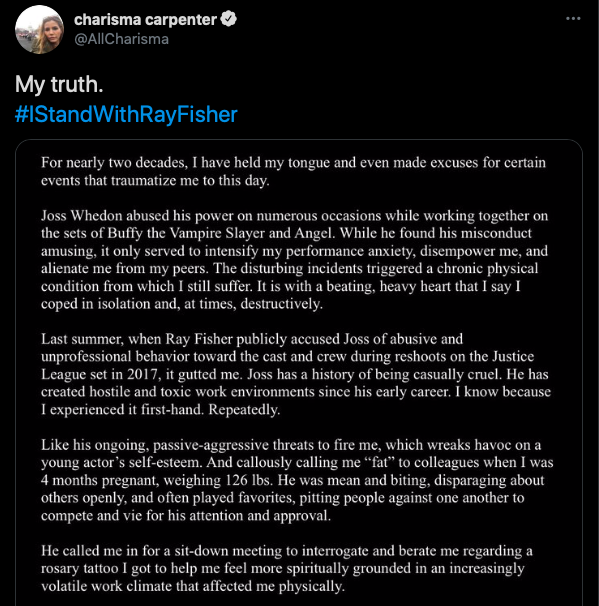 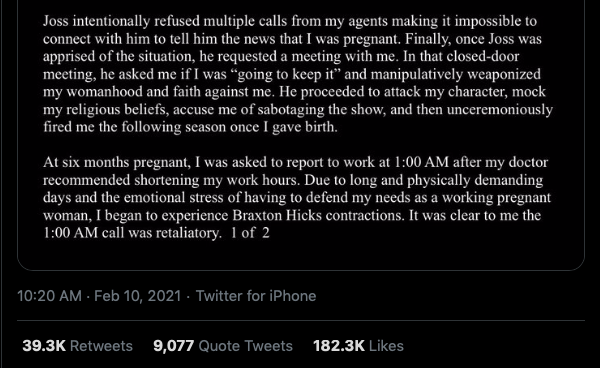 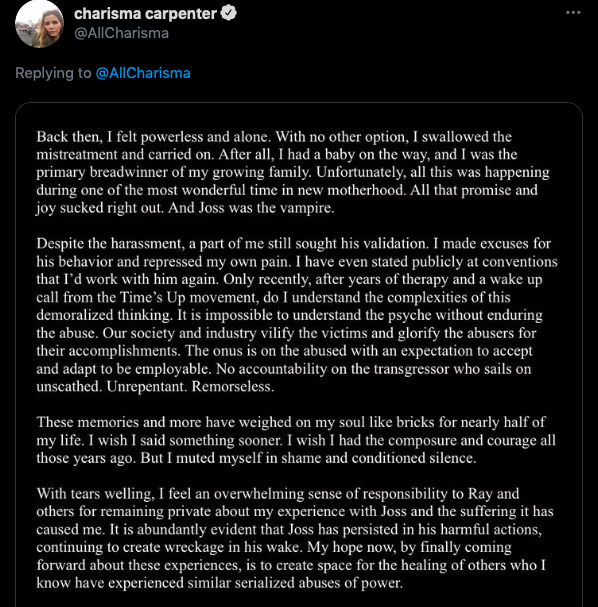 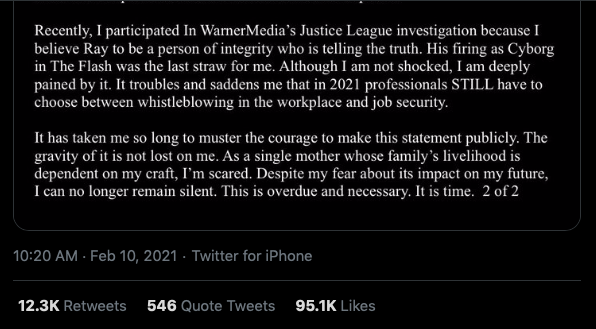 At six months pregnant, Carpenter said she was suddenly asked to report to work at one o’clock in the morning after her doctor said she needed to cut back on her working hours. “Due to long and physically demanding days and the emotional stress of having to defend my needs as a working pregnant woman, I began to experience Braxton Hicks contractions,” she explained. “It was clear to me the 1:00 AM call was retaliatory.”

At that time, Carpenter felt “powerless and alone.” Now, she says that since Whedon has “persisted in his harmful actions” — regarding the alleged mistreatment of Ray Fisher — Carpenter hopes that in sharing her experience, healing can begin for her and everyone who has been harmed by Whedon.

Whedon, like many accused abusers, is an avid supporter of Planned Parenthood. He even created a short film in support of the abortion corporation in 2017. That same year, Whedon’s ex-wife Kai Cole accused him of abuse and of being a “hypocrite preaching feminist ideas.” She said he had multiple affairs and uses fake feminism in his work to try to conceal those affairs and his true feelings about women.

READ: A look back at the sexual abuse allegations that shook the abortion industry

“[…] I want to let women know that he is not who he pretends to be,” Cole alleged in an article at The Wrap. “I want the people who worship him to know he is human, and the organizations giving him awards for his feminist work, to think twice in the future about honoring a man who does not practice what he preaches.”

Live Action’s Aiding Abusers investigation exposed Planned Parenthood’s cover-up of sexual abuse, including the abuse of minors. Though Planned Parenthood attached itself to the TimesUp movement in Hollywood, it was itself guilty of repeatedly committing abortions on abuse survivors as young as 12, of failing to report the abuse as required, and of sending those victims back to their abusers.

Abortion has become a tool for abusive people to use against women. It allows sexual predators to destroy the evidence of their rapes in the DNA of the baby. It allows powerful bosses to demand that female employees abort their babies or lose their jobs — especially in the entertainment industry where countless women feel they must abort to keep working. Some abusers threaten to kill their female partners or commit suicide if those partners don’t abort their babies. Sometimes, when women refuse to abort, they end up dead at the hands of their abusers. Murder is a leading cause of accidental death among pregnant women, second only to car accidents. 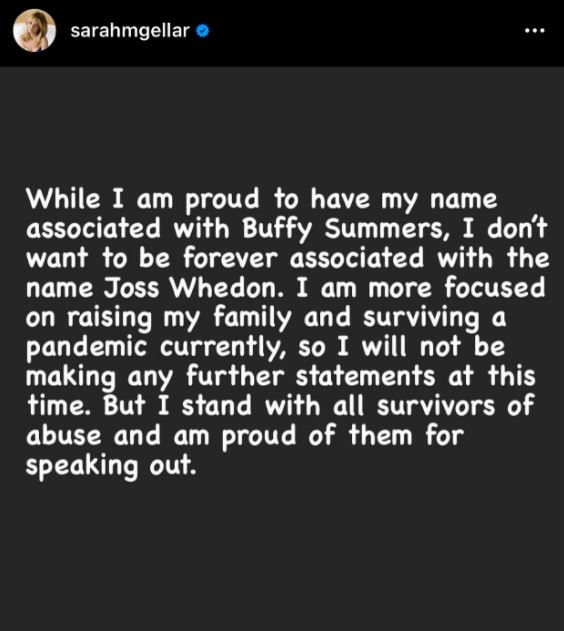 Since sharing her story, Carpenter’s co-stars on both “Buffy” and “Angel” have come forward to support her. Sarah Michelle Gellar, who played the lead role of Buffy, said, “While I am proud to have my name associated with Buffy Summers, I don’t want to be forever associated with the name Joss Whedon.”

Michelle Trachtenberg, who portrayed Buffy’s sister on the shows, said that there was a rule on set that stated, “[Whedon is] not allowed in a room alone with Michelle again.”

Actress Amber Benson said that Carpenter “is speaking the truth” and that the set of “Buffy” was “a toxic environment.”

Abortion is incompatible with true feminism because abortion allows women to be reduced to nothing more than sexual beings and their children to inconveniences to be destroyed. The pro-abortion mentality tells women that they are incapable of being mothers because of their age, their income, their marital status, their child’s health, their own health, or their career status.

True feminism embraces the female body and its ability to grow and nurture another human being in the first stages of life right up through infancy and childhood, and true feminism allows women to carry their babies to term with confidence and support and without fear of career loss.