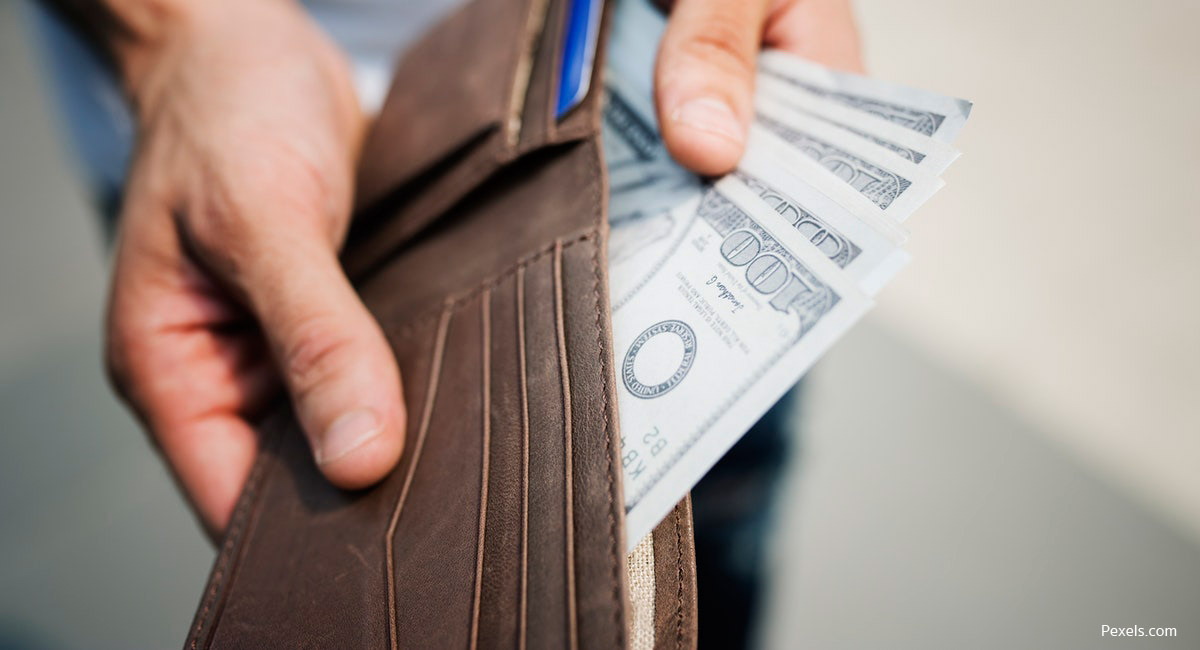 According to an analysis of California’s Fee for Service (FFS) Program, which funds abortions, California taxpayers have spent more than half a billion dollars on abortions committed in the state since 1989. Live Action News reviewed reports published by Medi-Cal, a California state tax funded program for low-income children and adults, and found that in just the state’s Fee for Service (FFS) Program, taxpayers paid nearly $700 million for abortions over 25 years, from 1989 to 2014.

As you can see from the chart above, actual taxpayer-funded abortion totals were unavailable until the year 2000. Between 2000 and 2014, California billed the taxpayers for nearly 840,000 abortions, which cost more than $358 million. 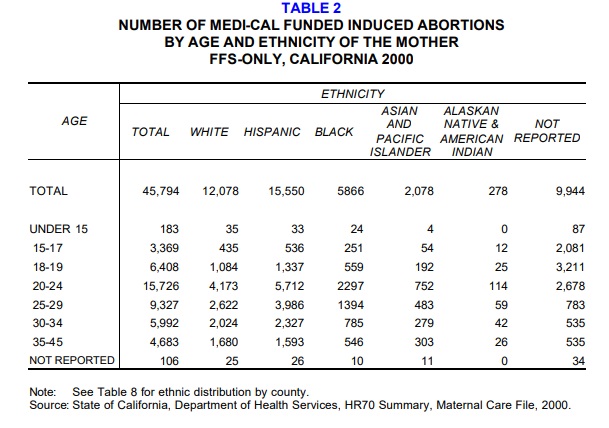 2014 FFS tax funded abortions broke down by race as follows:

Abortions by procedure were reported beginning in 2003. Documents show that from 2003 to 2014, over 80,000 later term abortions (D&E abortions) were taxpayer-funded. 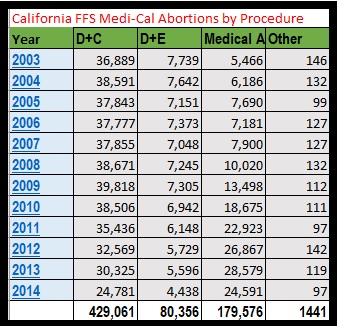 Previous Live Action News reports indicate that in several states including New Mexico, taxpayers end up funding late-term abortions (after the 20th week of pregnancy) done for any reason the woman desires. It is important to note that these abortions are not being committed solely for health reasons, as is often suggested by abortion proponents and the media.

The State of California does not publish its abortion numbers, which is why they are not included in the abortion totals from the Centers for Disease Control (CDC). (In 2014, 652,639 abortions were reported to the CDC from 49 reporting areas, excluding California, Maryland, and New Hampshire. In 2015, the number of abortions decreased to 638,169 for the same 49 reporting areas.)

Although 2015 data is not yet available, the Guttmacher Institute, a former “special affiliate” of Planned Parenthood, which claims to contact abortion facilities nationwide for their figures, reported a total of 926,200 abortions nationwide in 2014. In addition, Guttmacher published the following abortion statistics for California:

For years, Guttmacher has been the only source for abortion numbers in California, and their research reveals the following:

According to data published by the Guttmacher Institute in December of 2018, “16 states use their own funds to pay for all or most medically necessary abortions for Medicaid enrollees in the state….”  Live Action News has previously documented that more than half of abortions in Medicaid-coverage states are taxpayer funded.

In January of 2018, a Knights of Columbus-Marist poll found that six in ten Americans opposed using tax dollars to pay for abortions. A previous poll from 2017 had similar results, according to the Daily Signal, which wrote that, “When polled, 61 percent of Americans opposed using tax dollars to fund abortions within the United States, while 83 percent of respondents opposed subsidizing abortions outside of the United States.” In 2016, voters again reiterated their disdain for tax funded abortions. The poll, conducted by Politico and the Harvard T.H. Chan School of Public Health, revealed that 58% of voters opposed allowing Medicaid funding to be used for abortion services.