The year 2017 has brought good and bad news. Some good news is that a record number of Planned Parenthood facilities have closed. The bad news? Medical emergencies and ambulance calls to the abortion facilities still open have skyrocketed. So far for 2017, there have been 57 ambulance calls to abortion facilities in the U.S., with 35 of those being Planned Parenthood abortion centers. This is double the number of incidents as compared to 2016.

In December 2016, Americans United for Life released its “Unsafe” report, which detailed eight years worth of 1,400 documented abuses by 227 abortion facilities in 32 states. The key word here is “documented,” as there are likely more which went unreported.

By the summer of 2017, just halfway through the year, abortion facility ambulance calls were already on track to exceed the total number for 2016.

2016 had 28 recorded medical emergencies/ambulance calls at abortion facilities nationwide. By August of 2017, the 26th incident of the year was reported by Operation Rescue, which tracks and reports on such emergencies. As Troy Newman, president of Operation Rescue said at the time of reporting:

At this time last year, we had recorded only 14 medical emergencies at Planned Parenthood abortion facilities. 2017 looks like it will be a record-setting year, but that certainly not the kind of record we want anyone to set. However, we know we don’t hear about every incident, so we know the number of women suffering life-threatening abortion complications is actually much higher.

The incident involved a 20-year-old suffering a seizure at a Planned Parenthood in Cincinnati, Ohio; this facility’s license had expired nearly two months prior, on May 31. It also lacked a hospital transfer agreement.

Many of the facilities where these medical emergencies occurred are repeat offenders, in this year and in prior ones.

No lights, no sirens 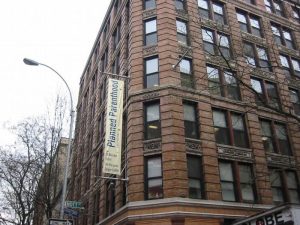 The latest reported incident took place at Planned Parenthood’s Margaret Sanger Center in New York City on December 2. This incident, in which a young woman walked to the ambulance on her own, was the eighth one to occur at the Sanger Center in 2017 (the others were not so lucky as to be able to walk out of the facility on their own). A witness who was there and photographed the incident told Operation Rescue that the ambulance had no siren when it arrived, and did not turn them on when leaving until it was a block away from the Planned Parenthood abortion facility.

In late May, a young woman was nearly fighting for her life as a result of her botched abortion at the Sanger Center. What makes this incident even more tragic is that the woman’s fiancé had been speaking to sidewalk counselors and tried to enter the facility to dissuade her from abortion, but was prevented from doing so by a security guard. 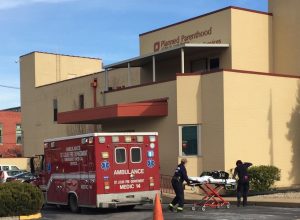 Before mid-September, when Planned Parenthood in Kansas City, Missouri, was granted a license to dispense medication abortion to women, the Planned Parenthood facility in St. Louis was the only one committing abortions. And ambulances arriving without lights or sirens was certainly not the abortion center’s only problem; it regularly endangers women.

In August, the St. Louis Planned Parenthood facility sent a woman, covered in a white sheet in an attempt to prevent witnesses from documenting the incident, to the hospital by ambulance. Since 2009, there have been 67 such medical emergencies at this one Planned Parenthood, averaging one incident every six weeks.

67 women protest at St. Louis Planned Parenthood, one for each ambulance call

Rep. Ann Wagner’s constituents looking for breast exams, contraceptives + other services they get from @PPSLR. Can she help them?? pic.twitter.com/KnqB532rpp

Abortion carries with it the potential for negative physical and psychological effects, some of them severe — suicide, and even death as a direct result of abortion complications. Even the most common first trimester procedures has risks:

One 20-year old victim, who, after having her abortion at Planned Parenthood in Kansas of late June this year, killed herself that same day. Instead of helping her with her homelessness and drug addiction, Planned Parenthood ended the life of her child, a decision which led to her ending her own life before the day was even over.

Planned Parenthood, as the leader of the abortion industry, opposes virtually all laws restricting or even regulating abortion. This includes even commonsense pro-life laws like the one in Texas (which was struck down last year by the U.S. Supreme Court), which mandated hospital transfer agreements and held abortion facilities to the same standards as ambulatory surgical centers.

So far for 2017, most ambulance calls have been occurring at Planned Parenthood facilities (while Planned Parenthood continues to draw half a billion dollars in taxpayer funds annually). As 2017 draws to a close, more women could be injured in the final days of the year, or information from previously unreported earlier incidents could come to light.

In opposing health and safety regulations and abortion restrictions, Planned Parenthood and the abortion industry prove that their main objective has nothing to do with women’s safety, but with abortion access, no matter what the cost in human lives.