A pro-life Missouri state senator has helped to craft a bill that would stop the St. Louis Planned Parenthood from interfering with emergency medical teams. Sen. Bob Onder’s legislation will be debated in Missouri’s special legislative session. The bill focuses on abortion facilities that interfere with medical response teams and ambulances in emergencies after botched abortions. The St. Louis Planned Parenthood is known for requesting that ambulances do not turn on their lights or sirens when responding to medical emergencies at its facility or to go through the back gate.

As Live Action News reported last month, Missouri Gov. Eric Greitens called a special session of the Missouri legislature to protect women and their babies from the abortion industry’s abuses.

I’m proud to support life—the lives of mothers, their children, and the innocent unborn. WATCH our call for a pro-life special session. pic.twitter.com/kELtCNrdKC

If a woman needs help, abortion clinics shouldn’t be able to tell an ambulance to come slowly, to not use their lights and sirens, or to go around to the back gate just because they’re worried that an ambulance arriving might make their abortion clinic look bad.

The governor’s comments came in response to a Missouri Senate report issued in 2016. In that report, myriad problems and violations were reported at the St. Louis Planned Parenthood. And that’s something Sen. Onder’s legislation seeks to stop. The Associated Press reports:

The proposal would establish a misdemeanor offense, punishable by up to a year in prison or a $2,000 fine, for clinic workers who make such requests that “interfere” with medical assistance, according to Republican Sen. Bob Onder, who’s been involved in crafting the legislation.

If approved, the law may be the first of its kind in the U.S., according to the Guttmacher Institute, a national research group that supports abortion rights.

President and CEO of Planned Parenthood of the St. Louis Region, Mary Kogut, admitted that Planned Parenthood “may have asked that the siren wasn’t on so that it didn’t alarm other people,” but she also claims that such policies do not exist any more, even though they were seen in use last year. Kogut also told the news media that “[i]f any of the governor’s proposals improved health and safety for our patients, we would be the first in line to endorse them.”

However, Planned Parenthood’s change in tune is too little, to late, say Missouri leaders. While the St. Louis Planned Parenthood sent 58 clients to the hospital between January 1, 2009 and April 6, 2016, it had already pushed the number to 65 by March 2017, showing no signs of stopping its dangerous activities: 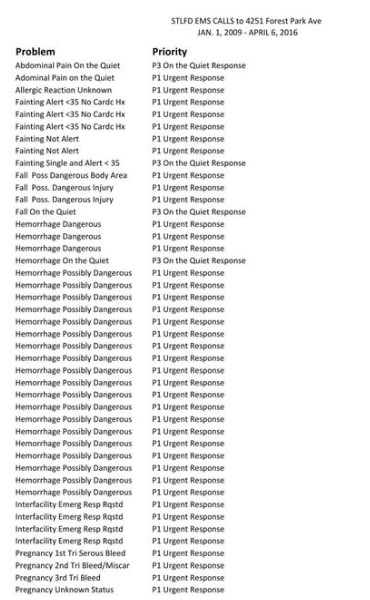 The report lists several examples of the abortion chain listing their own emergency number rather than 911 should an urgent situation arise:

The report’s conclusion on the safety issue is disturbing:

All of this indicates that Planned Parenthood is far more worried about the reputation, business model and public relations efforts than they are about the women in their care. It is difficult to conceive of any other organization, let alone an organization that holds itself out as providing women’s health services, being so recklessly indifferent to the health of their patients as to put such directives as those listed above in print for the use of their employees.

Now, Planned Parenthood and any other abortion business in the state may be mandated by law to do what’s right for women, which is the opposite of what the evidence in Missouri shows has been done for the last several years. In a statement of irony, Alison Dreith, executive director of NARAL Pro-Choice Missouri, said:

This language has nothing with the health and safety of women. It has everything to do with trying to trap providers as a way to trip them up, and shut down clinics that way.

The irony is that without this legislation, it’s the women who have been trapped while an ambulance quietly cruises to the facility as if it’s on a Sunday drive rather than trying to save a woman’s life because of a complication from an abortion. While Planned Parenthood may have changed its public policies, so that it can argue against legislation in the current session or avoid bad media, there’s no saying when the St. Louis Planned Parenthood might revert back to its typical bad actions. Even when an abortion is performed by an otherwise competent physician, the violent procedure can still result in complications.

No woman should be playing second fiddle to an abortion facility so worried about saving face that it risks her life.