The U.S. Supreme Court may have granted a free pass for the abortion industry in Texas to operate under unsafe conditions with its June ruling in Whole Woman’s Health v. Hellerstedt, but a new report from Americans United for Life, Unsafe, turns this faulty decision on its head with years of documented abuse across the industry. The abortion industry has already shown it cannot regulate itself, and Unsafe clearly illustrates what happens when abortion facilities are left to their own devices or regulatory laws are not consistently enforced. Unsafe describes eight years of over 1,400 documented abuses in 32 states by 227 abortion providers.

Denise Burke, AUL’s vice president of legal affairs, writes about the report for National Review, with “Lie of the Year: Abortion Clinics Are Safe.” In Hellerstedt, the Supreme Court ruled that the abortion industry was a safe one, but used faulty logic and debunked studies to do so. Whole Woman’s Health (an abortion chain and the plaintiff in Hellerstedt) has five facilities included in the Unsafe report — unsurprising, considering its history of unsafe conditions. 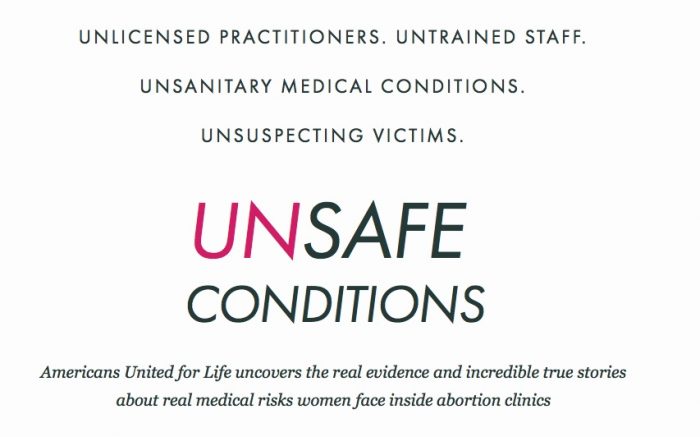 Likewise, Burke notes that the reality of an unregulated abortion industry may be even worse than the report reveals:

Significantly, efforts to discern the true state of abortion practice in most states were stymied by a dearth of protective laws in a number of states, a lack of reporting in others, and limited public availability of information on abortion providers in still more states. We can easily deduce, therefore, that the epidemic of substandard abortion practice is worse than Unsafe reveals.

What AUL was able to uncover, from 32 states, is indeed troubling. The 206-page report deals with over 1,400 violations at 227 facilities (full list of violations available here), 39 of which are Planned Parenthood affiliates. The Planned Parenthood facilities documented with violations in Unsafe are found in Alabama, California, Colorado, Delaware, Florida, Illinois, Maryland, Michigan, Nebraska, North Carolina, Ohio, Pennsylvania, South Carolina, Texas, and Virginia.

Amidst all the violations, there are only 34 license revocations to be found in Unsafe, and, perhaps most stunning of all, 65 repeat offenders who have been abusing women in the same way — while simultaneously killing off innocent preborn children — for years. The more than 1,400 violations include flagrant violations of laws in states that have attempted to regulate the abortion industry. Even in these states, the inspections and penalties have not been sufficient to stop the dangerous behavior of abortion facilities. 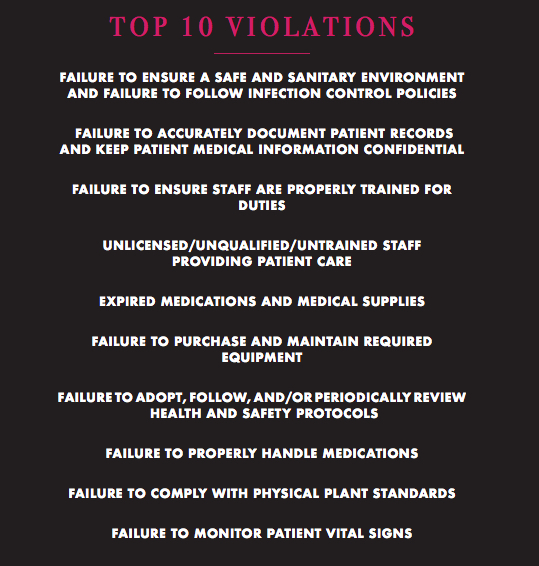 A page from the Unsafe report

The report keys in on 11 women who faced devastating consequences at the hands of the abortion industry. Several of them even paid with their lives, in what Unsafe refers to as an “Epidemic of Substandard Abortion Facilities and Practices.” The report also covers the dangers of abortionists who travel from state to state, known as “circuit riders,” and it highlights abortionists who should be known for their history of abuses, including circuit rider James Pendergraft, who has had his license revoked; LeRoy Carhart, who has abandoned patients with his circuit riding and had women die under his care; and Steven Brigham, who has also operated and had his license revoked in several states, due to his rampant abuses.

While the report warns that Hellerstedt means abortion industry abuses will continue, this is both a challenge and a wake-up call for the pro-life movement:

Moreover, with the Supreme Court’s recent decision in Whole Woman’s Health v. Hellerstedt, prioritizing “mere access” to abortion facilities and abortion industry profitability over women’s health and safety, we can expect the problems may get worse. It will certainly get worse unless pro-life Americans and their representatives take immediate action to confront and remedy the abortion industry’s dangerous practices and the rejection of medically appropriate health and safety standards of patient care. AUL’s innovative and highly successful Women’s Protection Project, discussed in this volume, provides the best “blueprint” for effective legislative action to address these appalling public health threats.

As Burke also writes for National Review, “[t]he Hellerstedt decision is not a censure of legislative efforts to expose and remedy abortion’s negative maternal-health consequences; instead, it explicitly challenges state officials and caring Americans to better document the epidemic of inferior care being provided in America’s abortion clinics.” Indeed, if the information provided in Unsafe had been available as evidence to the Supreme Court in Hellerstedt, there may have been a different outcome. Clark Forsythe, AUL’s acting president and senior counsel, writes that Unsafe was a direct response to the Supreme Court:

When the Supreme Court threw out Texas’ health and safety standards for abortion clinics, indicating that such protections would be constitutional … if only there was sufficient evidence of the need for such protections, Americans United for Life responded, “Game on.”

The report also proclaims that “[t]houghtful, caring Americans will never abandon women to the whims of predatory abortion profiteers. The public health crisis revealed in Unsafe and the solutions provided by the Women’s Protection Project provide the tools necessary to address the dangerous practices and conditions that dominate America’s abortion industry.”

The Unsafe website invites viewers to sign a petition for states to investigate abortion facilities and allows access to the report for anyone willing to provide an email address or sign the petition. AUL’s Women’s Protection Project which includes updated legislation, provides pro-lifers with information on how to act, based on the revelations of Unsafe.