While today, many Black leaders seem to have bought into Planned Parenthood’s sales pitch, pro-lifers have long contended that abortion is a tool of eugenics that disproportionately affects the Black community. And looking at the most recent data (2015) from the Centers for Disease Control showing numbers from 30 reporting areas, it’s easy to see why.

In 2015, the CDC reported a total of 638,169 total abortions. Since only 30 areas reported abortions by race/ethnicity, we estimated the total of abortions by multiplying the CDC’s abortions by their abortion percentage per category (CDC’s abortion totals are significantly lower than the Guttmacher Institute’s because the organizations gather abortion data differently.) Using the most recent US Census Bureau data estimates on race in the U.S., we estimate the following:

What’s so striking about this? Black Americans make up just 12% of the U.S. population, yet have more than a third of the abortions.

In 2015, though Blacks made up just 12% of the U.S. population, they accounted for 36 percent of reported abortions. The Black abortion rate was 3.6 times higher than the White abortion rate (25.1 v. 6.8) and 2.2 times higher than the Hispanic abortion rate (25.1 v. 11.2). More than 629 abortions were done every single day on Black women that year. In addition, Black abortions (229,740 estimated) outnumbered the top nine leading causes of death (225,955) for Black Americans combined. In fact, estimated Black abortion numbers were 25 times greater than homicides committed on Black Americans (229, 740 v. 9,038) that same year. 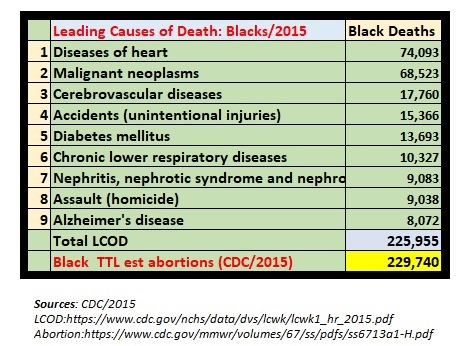 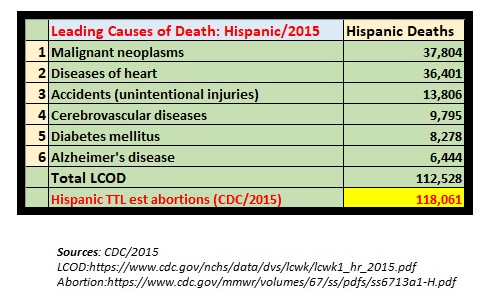 Planned Parenthood, the largest provider of abortion in the U.S., commits more than 35% of all abortions. But they don’t break down their abortion numbers by race. What might we find if they did? Previously published data from Life Dynamics (2011) and Protecting Black Life (2012) reveals that Planned Parenthood largely sets up facilities in or near minority communities. A more recent analysis from Life Issues Institute (2017) claims “the abortion giant has accelerated this targeting of minorities near its 25 new abortion mega-centers.”

Recently, Supreme Court Justice Clarence Thomas also noted Planned Parenthood’s eugenic history, writing, “The use of abortion to achieve eugenic goals is not merely hypothetical. The foundations for legalizing abortion in America were laid during the early 20th-century birth control movement. That movement developed alongside the American eugenics movement. And significantly, Planned Parenthood founder Margaret Sanger recognized the eugenic potential of her cause.”

Justice Thomas correctly pointed out that Sanger herself did not advocate abortion but regarded “the hundreds of thousands of abortions performed in America each year [as] a disgrace to civilization.” However, he astutely noted that “Sanger’s arguments about the eugenic value of birth control in securing ‘the elimination of the unfit’ apply with even greater force to abortion, making it significantly more effective as a tool of eugenics.”