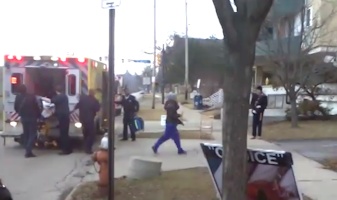 A 22-year-old woman died last week after an abortion at the Preterm abortion mill in Cleveland. Lakisha Wilson went to Preterm for an abortion later in pregnancy, which she was reportedly denied at other abortion mills in the area due to how far along she was. It is unclear at this time exactly what circumstances led to Lakisha’s demise, but by the time a staffer called 911 to request an ambulance for Lakisha, she was not breathing at all. Wilson was transported to the hospital and treated, but she passed away a few days later.

According to an eyewitness who is also a retired doctor, paramedics were making no efforts to save the young woman’s life because she was apparently already dead:

There was no protection over her head, no mask on her face. They were in no rush to get her out, which tells me she was beyond help. There were no lights (or siren on ambulance) going to the hospital.

According to Operation Rescue, which published the above video, Wilson was kept on life support after arriving at the hospital so that her organs could be harvested:

According to information gathered by Operation Rescue from those on the scene and who have been contacted by members of the woman’s family, Lakisha Wilson was in the later stages of pregnancy, and because of that was turned down by abortion clinics in Columbus and Akron.

She was said to have been brain dead at the time she arrived at the hospital, but was kept on life support for several days so that her organs could be harvested.

Operation Rescue participated in a press conference regarding Wilson’s death yesterday. The organization has filed complaints with the Ohio Medical Board and the Ohio Department of Health. Autopsy reports have not yet been released, but updates can be found at Operation Rescue as they come available. The pro-life community in Cleveland and pro-lifers across the nation at large are working to bring those responsible for Lakisha’s death to justice.