Speaking out against violence does not equate to inciting violence, yet that’s what abortionist Dr. Leah Torres erroneously claimed after Live Action president and founder Lila Rose tweeted, “Abortion is violence” on Thursday. Torres called this statement “domestic terrorism” that would “incite others to commit crimes against clinics, patients, and health care providers.” Just as a statement condemning the violence of rape doesn’t equate to a call for vigilante violence against rapists, the statement that abortion is violence is not a call for violence against abortionists. The truth is abortion is a violent act with the sole intention of killing an innocent preborn human being.

Live Action and Rose have long condemned acts of violence, whether committed in the form of abortion or carried out against those in the abortion industry. The abortion industry does not do likewise, instead refusing to condemn violent acts against pro-lifers, which have been on the rise in recent years. 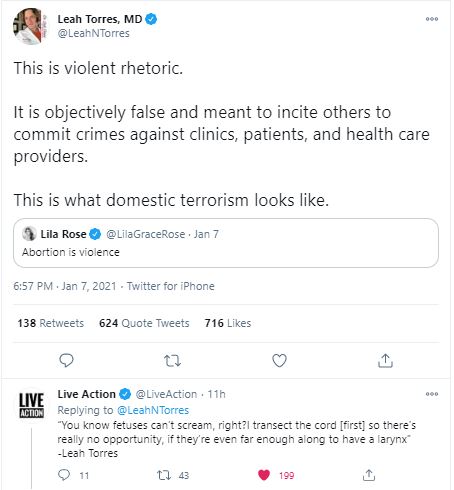 Every day, approximately 2,363 preborn human beings are killed by abortion in the United States. Since 1973, when abortion was legalized through all nine months of pregnancy, nearly 62 million preborn lives have been violently and purposefully ended.

The earliest of preborn lives are destroyed via the abortion pill regimen, which works in two steps. The first pill, mifepristone (also known as RU-486), blocks progesterone — a naturally produced hormone that supports the growing baby — and cuts off nourishment, starving the baby to death. The second pill, misoprostol, works with mifepristone to cause contractions and expel the deceased child.

In a first-trimester surgical abortion, the abortionist forces open the cervix and then uses a suction catheter and a suction machine with a force 10-20 times that of a household vacuum to rapidly tear the baby apart.

An induction abortion is committed from 25 weeks to full term when children are capable of surviving outside the womb and of feeling pain. To kill the child, feticide is injected into the child’s head or heart with the purpose of causing cardiac arrest and death. The mother must wait a few days before giving birth to her dead baby.

Another less known type of abortion is exsanguination, in which the baby is drained of her blood by cutting the umbilical cord. The abortionist then waits for her to die. But the most violent abortion procedure currently in use is also the most common one used in the second trimester. During a D&E abortion, a child’s arms and legs are violently torn from her torso before she is decapitated and her skull crushed. It is as horrific as it sounds.

In June 2020, Carhart “mangled” two women so badly during D&E abortions that hospital emergency room staffers were traumatized by what they saw. One of the patients had a hole torn in her uterus, and her baby’s body parts had been forced through it. She had to have her bowel resected and received a colostomy with an external bag. The other woman required a hysterectomy because the damage to her organs was so horrific.

Planned Parenthood abortionist Lisa Harris once described committing a D&E abortion while she herself was pregnant:

With my first pass of the forceps, I grasped an extremity and began to pull it down. I could see a small foot hanging from the teeth of my forceps. With a quick tug, I separated the leg. Precisely at that moment, I felt a kick – a fluttery “thump, thump” in my own uterus. It was one of the first times I felt fetal movement. There was a leg and foot in my forceps, and a “thump, thump” in my abdomen. Instantly, tears were streaming from my eyes…

The victims of abortion

Photographs of children killed through abortion are graphic and heartwrenching, but they shine a light on the darkness and violence of abortion. 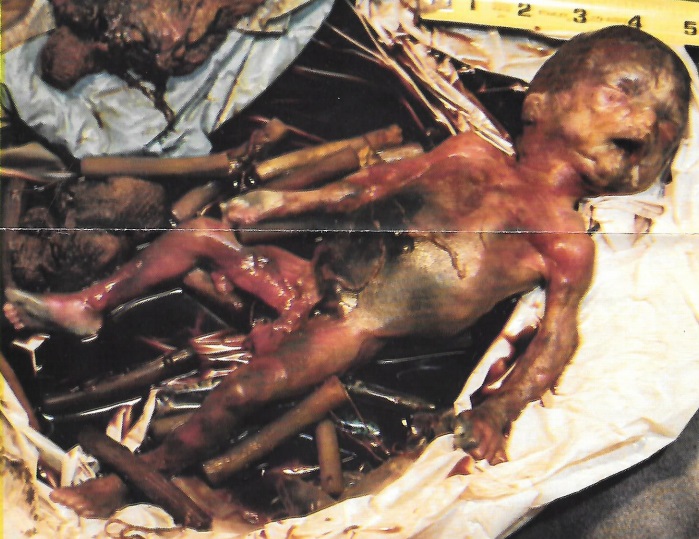 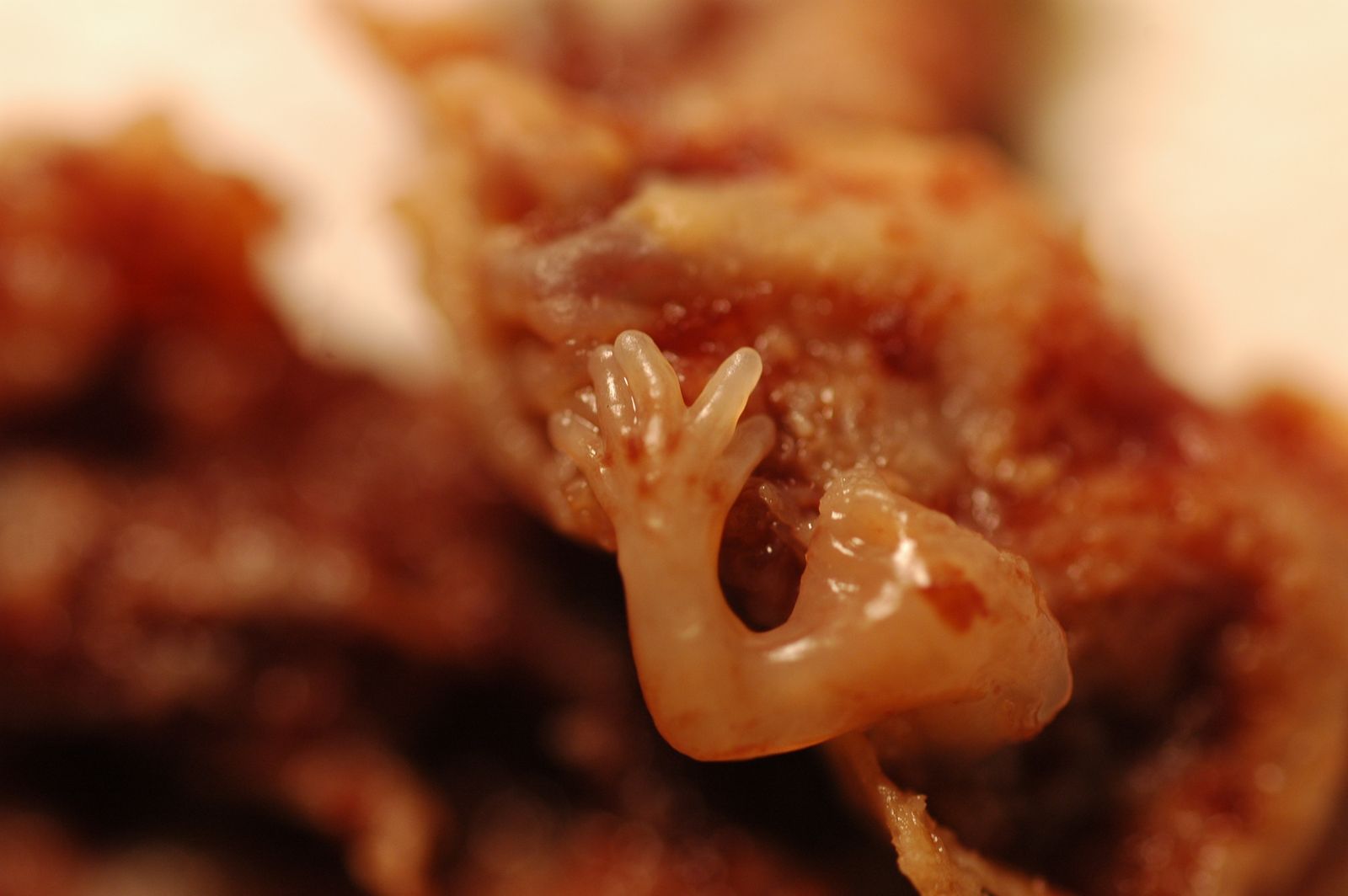 Voiceless victims of abortion tell their stories only through heartbreaking photographs, but there are also abortion survivors who lived to speak of the violence they survived and the effects that abortion had on their bodies. 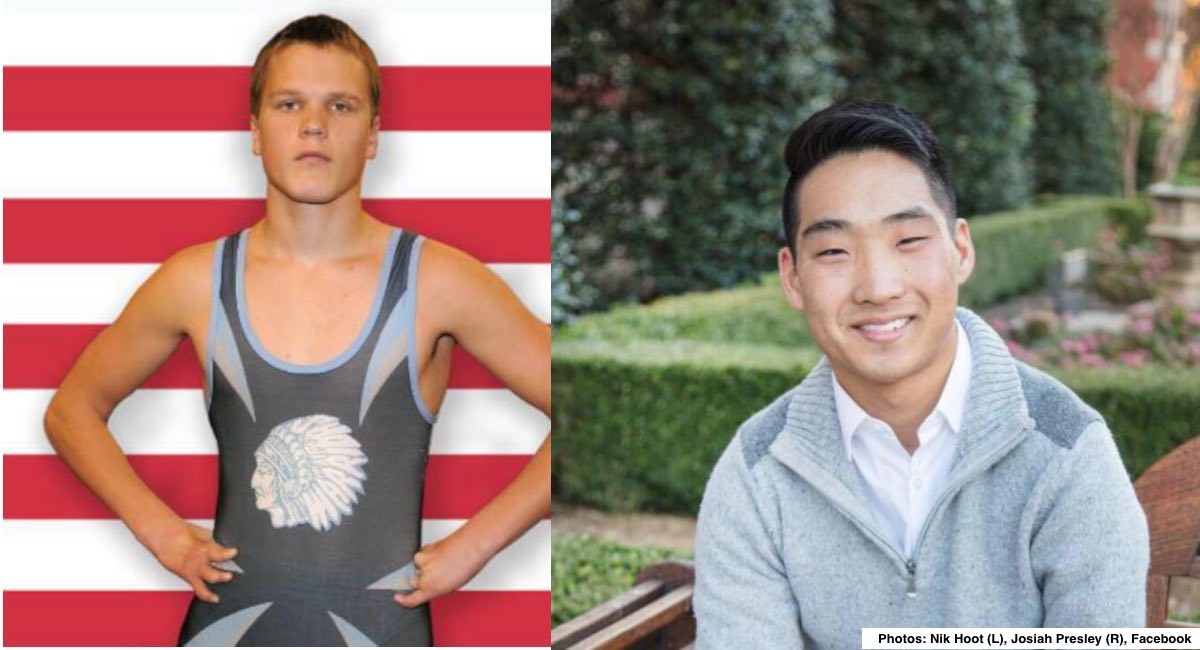 Nik Hoot lost portions of his limbs to an abortionist’s attempt on his life. “I knew that I was supposed to be an aborted baby and it failed,” he said. “It makes me angry because I would never want for that to happen to any kid. Anybody can become anything, and getting rid of a kid like that isn’t right to me.”

Josiah Presley survived a D&C abortion at just eight weeks. As a result of the abortion, he has a disfigured arm. “For years I did struggle with my deformity and even contemplated suicide,” he said. “As the Lord has worked in my life, He has shown me that my identity is not in my deformity. That my identity is in Him, and He has a purpose and will for my life.”

Women who have undergone abortions have experienced the trauma of abortion first hand and lived to tell about it. One woman spoke of her abortion at 26 weeks saying, “I can remember him [Dr. Tiller] half delivering my baby, jabbing scissors into his head and killing him, then just kind of throwing him to the side and finishing up.” Abortionist Kermit Gosnell killed countless newborns this way and was tried for the deaths of seven of them, and the death of one woman.

As a teen, Christine Loughead was forced into abortions. “In my mind, those days when the doctors dismembered my child in my body they not only killed my child, they raped me in the process,” she told Live Action News. “After I said no, they ripped open my legs and inserted things inside me. So much for bodily autonomy. […] Institutionalization was pretty bad. Rape was pretty bad too. But the abortions were the worst.”

Abortionists know that abortion is violence

Abortionists (and abortion advocates) know abortion is an act of violence. Abortionist Lisa Harris told an audience at a National Abortion Federation convention that abortion activists should acknowledge that the photos of aborted children, like those above, are real, and that abortion is violence:

[I] actually think that we should be less about denying the reality of those images. More about acknowledging, that yeah, that’s kind of true. … We might actually both agree that there’s violence in here, ask me why I come to work every day. Let’s just give them all, the violence, it’s a person, killing – let’s just give them all that.

Former abortion worker Catherine Adair recalled how she would tell women “the doctor was going to ‘gently extract the contents of the uterus.'” In reality, she explained, “[T]heir baby would be in agony as the doctor used forceps and sharp instruments to dismember their child, pulling and tugging until the baby was ripped apart and he could pull the body out, piece by piece.”

Another abortionist, Dr. Bertran Wainer, admitted that abortion is exactly what pro-lifers say it is. “Abortion is killing,” he said. “Nobody can argue with that. When the fetus is inside the uterus it is alive and when the pregnancy terminated it is dead – that by any definition is killing.…”

Prolifers counter the culture of death

Pro-lifers respond to the violence of abortion by offering hope and life to women outside abortion businesses and inside pregnancy resource centers.

Live Action works to educate the world on the violence of abortion by partnering with former abortionists and abortion workers to expose the truth.

“Live Action and all leading pro-life groups stand firmly against violence,” said Rose. “It is no surprise that the industry that lies about human development and profits millions from the bloodshed of innocent children will also lie about the pro-life movement and make a ridiculous attempt to silence us.”