The co-chair of the Congressional Pro-Choice Caucus has labeled a 529 college savings plan for an “unborn child” in the GOP tax plan a “back-door attempt to establish personhood from the moment of conception.” Congresswoman Diana DeGette (D-Colo.) criticized the wording in a November 2 press release, issued shortly after the plan was released by the House. The move follows a change by the US Department of Health and Human Services (HHS) to define human life as ‘beginning at conception.’

According to Politico, the GOP tax bill “would allow expectant parents to start putting away money for college and private school tuition, wading into the battle over when human life begins.”

The proposal defines the ‘child in utero’ as, “a member of the species homo sapiens, at any stage of development” and reads:

UNBORN CHILDREN ALLOWED AS ACCOUNT BENEFICIARIES.—Section 529(e) is amended by adding at the end the following new paragraph:
‘‘(6) TREATMENT OF UNBORN CHILDREN.—
‘‘(A) IN GENERAL.—Nothing shall prevent an unborn child from being treated as a designated beneficiary or an individual under this section.
‘‘(B) UNBORN CHILD.—For purposes of this paragraph—
‘‘(i) IN GENERAL.—The term ‘unborn child’ means a child in utero.
‘‘(ii) CHILD IN UTERO.—The term ‘child in utero’ means a member of the species homo sapiens, at any stage of development, who is carried in the womb.’’

NBC pointed out that the bill’s terminology “mirrors a section of the 2004 Unborn Victims of Violence Act, which was enacted after the murder of Laci Peterson, who was pregnant.”

In response to the news, Paul McLeod, BuzzFeed reporter for Capitol Hill, tweeted, “I’m reading this as anti-abortion wedge. If an unborn child can be a beneficiary, that makes them a legal person, so how can they be killed?” 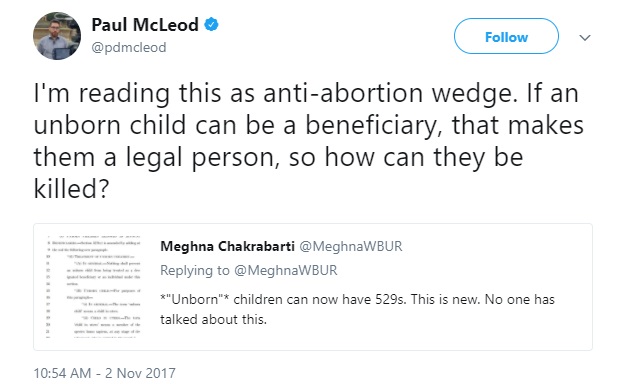 Their fear is that if it can be established that the preborn child in the womb is a person, it could lead to overturning the infamous Roe v. Wade decision, which forced abortion on the nation. 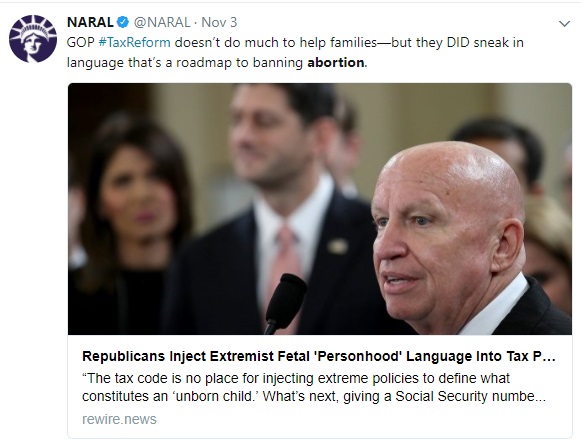 “On its own, I find it a despicable play to lay the groundwork for “personhood” bills and ending abortion rights,” Calla Hales, manager of A Preferred Woman abortion clinic in Charlotte, North Carolina told Bustle.

“Naturally, you’d expect me to say that as an abortion provider. As a tax paying citizen, I’ll frame it this way: Frankly, it’s fraud. A potential life cannot have assets. It cannot work, earn money, or open a bank account (or have one opened for it). … I find it logically impossible and incredibly unethical to fiscally account for a fetus,” Hales added.

Planned Parenthood, which gets over half a billion dollars a year from taxpayers, expressed its opposition to the move as well, telling CNN that defining a preborn child in the tax code would end up restricting access to abortion.

“It is absurd that House Republican leaders would use a tax bill to try to advance their agenda to undermine access to safe, legal abortion,” Dana Singiser, Vice President for Public Policy and Government Affairs at Planned Parenthood Action Fund told CNN.

Planned Parenthood, whose CEO was hired for her political organizing skills (not her health care experience, because she had none), has a record of Medicaid fraud, covering for child sexual predators, selling aborted baby parts, and chose Halloween to tweet an outrageous and eugenics-style message to the Black community that abortion is safer for women of color than childbirth. (Incidentally, Planned Parenthood’s founder was a known eugenicist who once gave a speech before the Ku Klux Klan.)

“Even in the tax reform debate, Republicans could not resist including offensive provisions to appease an extremist minority, ” Rep. DeGette wrote, “The tax code is no place to define what constitutes an ‘unborn child.’ What’s next, giving a Social Security number to a zygote?”

But Mallory Quigley, communications director for the pro-life Susan B. Anthony List, disagreed, telling NBC News that the measure is “a small increment in the momentum that we’re building to ensure that one day every child is welcomed and protected under the law. We hope that it stays in the House bill and that it stays in anything the Senate puts out.”