The second one, I went right away; it was really early. It was the same kind of big Chicago clinic. I remember it being even more efficient, more factory like the second one, and that bothered me more this time.

Another woman compared her experience to being raped, saying, “It doesn’t matter what they say, it’s still close to rape in terms of that sort of feeling of being gutted emotionally as well as physically.” Yet another woman called the staff unpleasant, callous, and indifferent. “Inside I screamed protest at their treatment of me – the lack of attention when I awoke with severe pain; the looking through me as if I didn’t really exist; the fact that they weren’t interested in me, as a person, [enough] to hear my story or to help me make sense of it all,” she recalled.

READ: Woman dies in taxi after abortion facility discharges her ‘too weak to speak’

The comparison to a cattle drive was something that came up frequently.

I could swear that there was only one doctor and he just went down the line, giving abortions. I started crying because I could hear that little [suction] machine going on and off. He just kept getting closer and closer. I heard his gloves pop off in the next room and then he came to me. He didn’t say a word.…

I remember some of the women just squalling, just absolutely lost their minds, just crying. And I remember shaking constantly. It was just like you were a herd of cattle… Women were crying before they went in and they were crying after.

The abortion experience was like a cattle drive. The other women and I were herded together from room to room. …. We were then ushered into separate rooms where we waited for the doctor. It was a cold and humiliating experience. The worst part was the “recovery room.” All the women were put together into a large dark room where we were placed on cold vinyl beds to wait for the Valium to wear off. I’ll never forget the sickening feeling of lying in that room, listening to the moaning of other women…

Other women have said that they were yelled at and treated like trash. One woman described her abortion facility was “a dirty, poorly operated clinic, with zero transparency and zero care for the patients. The doctors try to spend as little time as possible with you, are condescending and basically seem like they all dread being there…. Avoid at all costs.… [the bathroom] is dirty and smells of dried urine (it was evident it hadn’t been cleaned in days).”

Similar sentiments were echoed by facility staffers, who said that they ran the facility like an assembly line, with women just “a line item on our budget sheet.” It also wasn’t unusual for abortion facilities to be found in decrepit, disgusting, unsanitary conditions — not safe for any woman to undergo medical procedures in.

On Yelp, negative reviews are commonplace — even among abortion supporters.

The staff came off as uncaring: 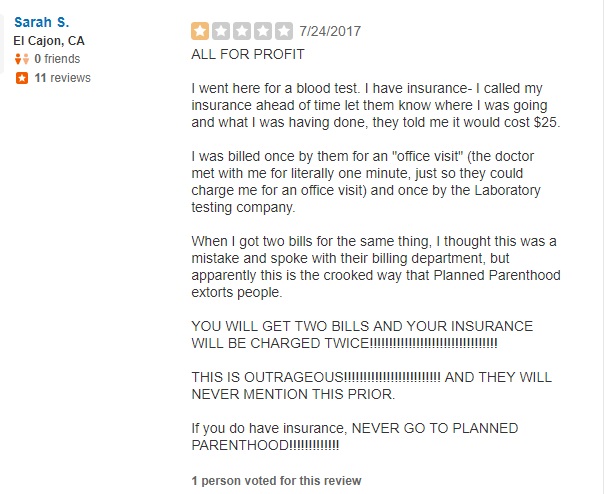 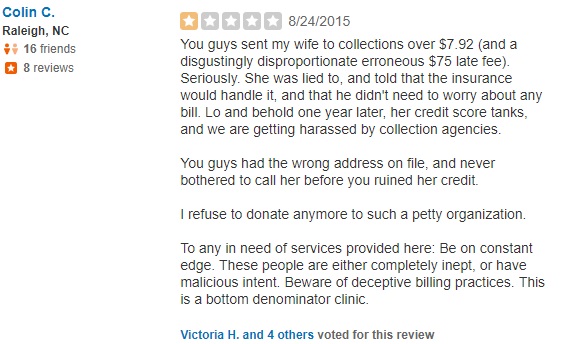 Be ignored while the workers sit around and gossip:

The people don’t seem to care: 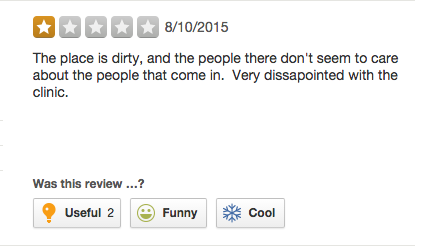 The room was filthy: 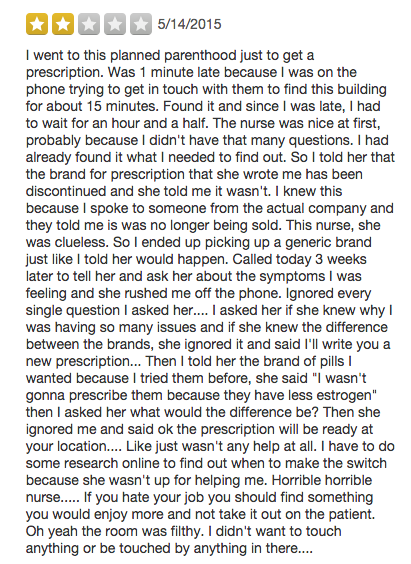 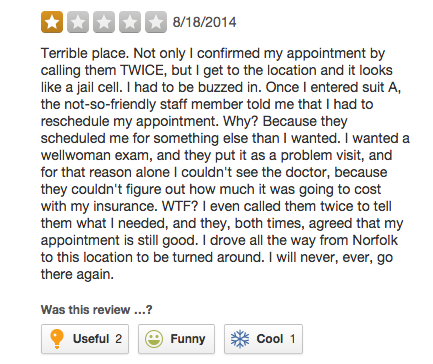 They make you wait in a crowded room: 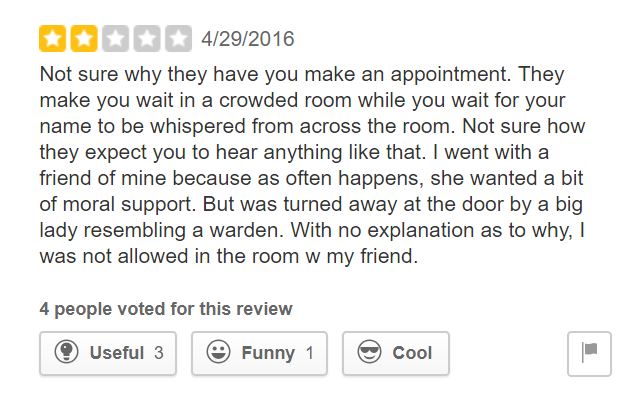 “You put things in your vagina, right?”

You need to get your act together: 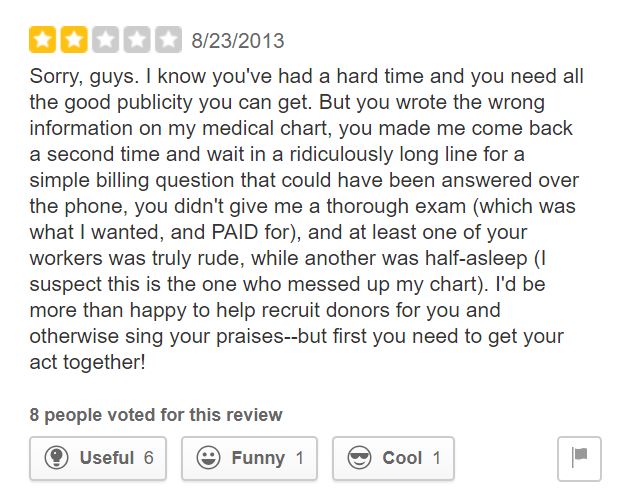 Laughed at me with a smirk on her face: 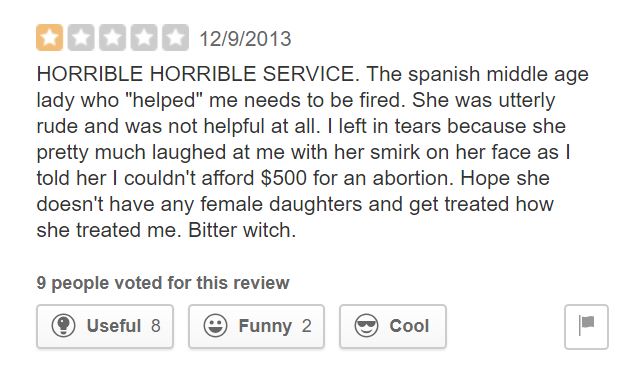 It was depressing… patients in raggedy hospital gowns: 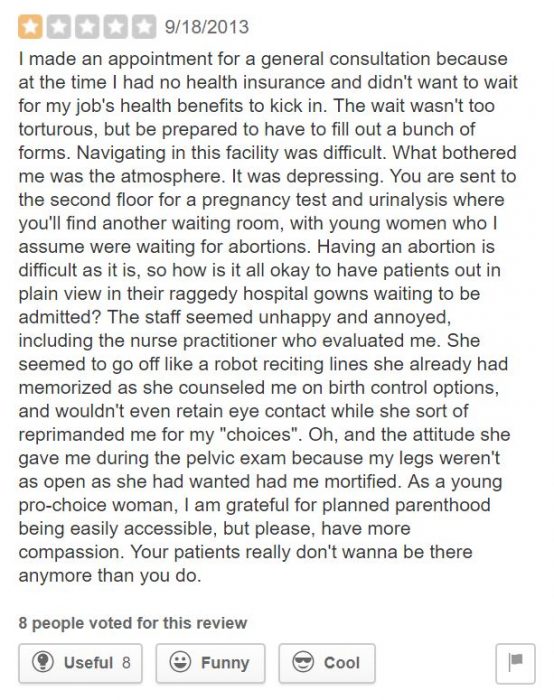 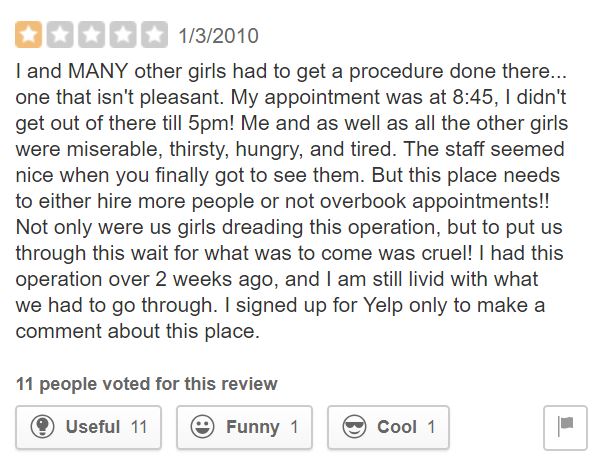 I hope others won’t have to experience the same heartache: 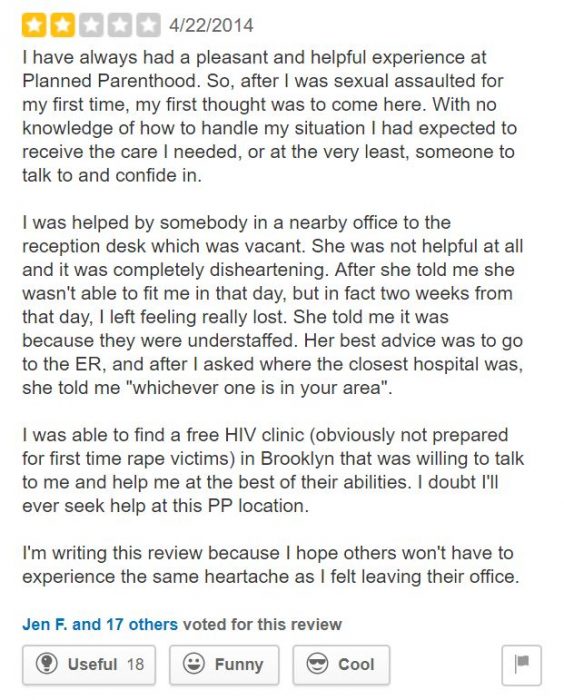 The reality is that abortion facilities are not warm, welcoming places with friendly, caring staffers eager to help women and treat them with compassion. Pregnancy resource centers are the far better option, ready to help women with absolutely free limited medical services, without trying to kill their preborn babies in the process.