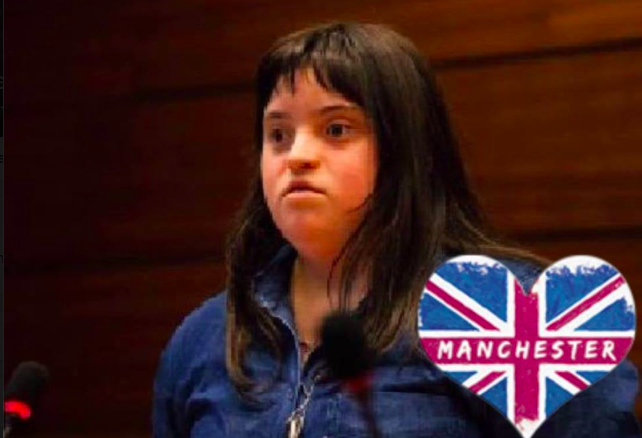 After watching the documentary “A World Without Down Syndrome,” 21-year-old Charlotte Helene Fien, who has Down syndrome and autism, wrote a speech about her right to life that she would later read in front of the United Nations.

She asks people not to feel sorry for her and says she loves her life. She loves to play golf and wants to teach children to play golf. She travels independently to other countries and doesn’t let Down syndrome hold her back.

“Please do not try to kill us all off,” she asks. “Do not allow this test. If you do allow it, you are no better than the Nazis[.] […] I have a right to live, and so do other people like me.”

Doctors told Fien’s parents she wouldn’t walk before age four, but Fien began walking at 15 months. They said she would be in diapers until she was nine, but Fien was out of them earlier than her brothers, who don’t have Down syndrome.

“Parents need to know that the possibilities are limitless for our kids,” her mother told Bright Vibes. “I was told Charlie would never speak one language properly. Well she speaks, reads and writes in two.”

According to Bright Vibes, which shared a video of Fien on Facebook, Fien received a five-minute standing ovation for her speech, which marked World Down Syndrome Day 2017.