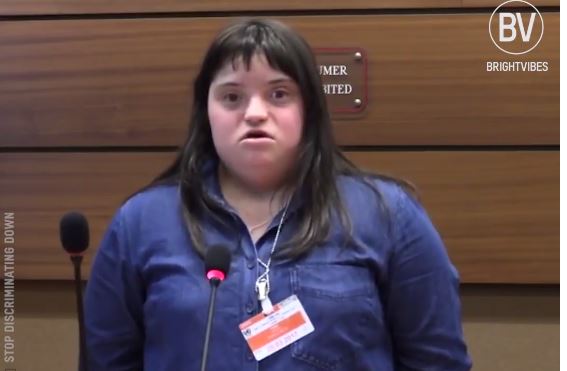 The United Nations Human Rights Committee recently met to draft its interpretation of the right to life — and yet spent much of the time affirming the “right” to abortion instead. Yadh Ben Achour, a Tunisian lawyer and member of the committee, made comments regarding Down syndrome and abortion that show he is not particularly interested in protecting human rights — at least not for individuals he deems inferior.

Achour claims that he is a “defender of the handicapped” and disabled, but he also believes women should abort preborn babies who receive a prenatal diagnosis:

I myself am an ardent defender of the handicapped and I understand very well that society and the State have to do everything possible to protect handicapped, help them, and ensure they have a life, a possible living. But that does not mean that we have to accept to let a disabled foetus live. This is a preventive measure. If you tell a woman “Your child has Dow… ” — what is it called? Down syndrome, dawn syndrome — if you tell her that, isn’t it, or that he may have a handicap forever, for the rest of his life, you should make this woman… it should be possible for her to resort to abortion to avoid the handicap as a preventive measure.

This doesn’t mean that we are against the disabled or that we won’t help the disabled when born disabled. So this is where we will find the difference between the birth of the human being, once he is born, it is finished; with a handicap or without a handicap, he must live and we must protect absolutely, in an absolute manner, his right to life. That, it does not mean that we have to accept the handicaps when the embryo is still in his mother’s womb, it would be too serious. So us, we defend the right of the handicapped, but, but we can avoid the handicaps and we must do everything we can to avoid them. And it is not contradictory.

Perhaps Mr. Achour should consult with people with disabilities, whom he wants to eradicate, and see how they feel. They’re more than willing to speak up. Charlotte Fien is one of them, and she made international headlines when she addressed the UN earlier this year. Fien — who has both Down syndrome and autism — told the assembly that she has a right to live. Now, she’s written an open letter in response to Achour’s horrific comments.

Fien published her open letter to Achour on Facebook, also sending a letter directly to the United Nations, slamming Achour for his ableist comments:

I have seen you, Mr. Ben-Achour. A member of the Human Rights Council suggest that people like me should be aborted up to birth. Mr. Ben-Achour, your comments about people with Down syndrome deeply offended me. I felt you attacked me for being who I am. Who am I, Mr. Ben-Achour? I’m a human being just like you. Our only difference is an extra chromosome. My extra chromosome makes me far more tolerant than you, sir.

I want to speak to you about the world’s goal to eradicate people like me. Around the world, more than 90% of babies known to have Down syndrome are being aborted. Aborted up to the day they are due to be born, in many cases.

A test that can check for hundreds of things including gender is being used to search and destroy for Down syndrome. In many countries where female babies are considered undesirable, they’re aborted. The world is concerned about this issue and think it’s horrible. But you are not concerned about targeting Down syndrome for eradication? Why is that, Mr. Ben-Achour?

If any other heritable traits like skin colour were used to eradicate a group of people, the world would cry out. Why are you not crying out when people like me are being made extinct? What have WE done to make you want us to disappear? As far as I know my community doesn’t hate, discriminate, or commit crimes.

I keep hearing you use the word suffering in relation to Down syndrome. I don’t know anyone with Down syndrome that is suffering. The ONLY thing we have to suffer are horrible people who want to make us extinct.

I have a brilliant life. I have a family that loves me. I have great friends. I have an active social life. I’m studying at university and have goals to become a writer. I want to get married one day and maybe even have a baby.

Mr. Ben-Achour, if you have your way those goals will NEVER happen. What you are suggesting is eugenics. It’s disgusting and EVIL. You need to apologise for your horrible comments. You should also be removed from the Human Rights Council as an expert. You are not an expert about Down syndrome. You sir, do not speak for my community.

Fien is far from alone in speaking out against despicable comments directed towards people with Down syndrome and other disabilities. And sadly, those comments are not uncommon — nor are the actual abortions themselves. In Iceland, the abortion rate for preborn babies diagnosed with Down syndrome is almost 100 percent. An episode of”60 Minutes Australia” positively featured a test that was described as able to “effectively end Down syndrome” in Australia. In the Netherlands, women are told they have a moral duty to abort their babies with Down syndrome. Here in the United States, women are routinely given outdated, inaccurate information about Down syndrome, according to a study published by Dr. Brian Skotko, while another study found that women were given a prenatal diagnosis in a negative way, at a rate of 2.5 to 1. One in four women said they were pressured to have an abortion. The examples go on and on and on and on.

It’s unfathomable that people are being targeted for death and eradication simply because they are different. Disability doesn’t mean less than; it doesn’t mean their lives are not worth living. And it absolutely does not make someone like Mr. Achour superior and able to determine whether or not someone should be permitted to live.