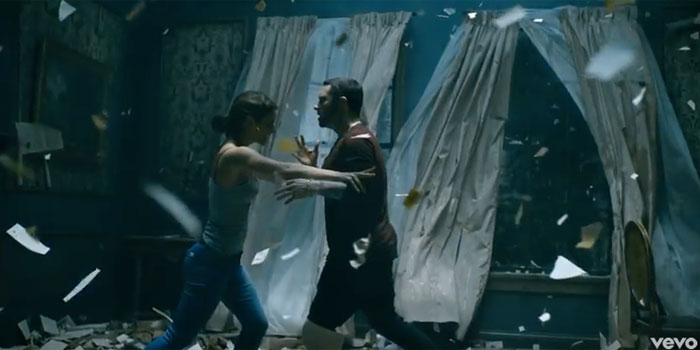 Last December, rapper Eminem released a new album, “Revival.” The first single, titled “River,” has received heavy airplay on radios and is currently rising on the Billboard charts. But the song has gained notoriety because of its heavy subject matter: abortion. The lyrics not only discuss abortion, but show deep regret and pain, in which the father begs his unborn child for forgiveness.

The seven-minute music video, released on Valentine’s Day, does not shy away from the topic at hand. In the song, Eminem tells a story of his life as a serial cheater and “sex addict” who began an affair with a woman named Suzanne. He confesses to using and taking advantage of Suzanne, who became pregnant. Eminem, panicked, made her abort, and yet, this decision haunts him. “I can’t keep my lies straight, but I made you terminate my baby; This love triangle left us in a wreck, tangled,” he raps. “What else can I say? It was fun for a while, bet I really woulda loved your smile, didn’t really wanna abort, but f*** it — what’s one more lie, to tell our unborn child?”

The video expounds on this story, showing more of the story between Eminem and Suzanne, and it’s extremely emotional. (CAUTION: heavy profanity)

The song and accompanying music video, are sad — but also honest about the reality of this so-called simple surgical procedure. Unplanned pregnancies are real, and the fear that comes with them can’t be denied. But abortion doesn’t solve the problem, and instead, only gives couples more pain and more suffering. “River” makes that clear, and shows how abortion affects not only women, but men as well.

Post-abortive fathers have frequently spoken out about how abortion affected them. Even when men have pressured women to abort, they still find it haunting them later. “I wish I knew how much better my life could have been with a kid in it,” one post-abortive father said. “I’ve always felt I would have had a daughter, which I’d have loved now, and becoming a father would have been life-changing. But it’s only as time has passed that I appreciate the enormity of what happened and what I lost,” another said. Another dad, speaking of his wife’s decision to abort two of their three triplets, struggled with feeling helpless, a feeling many men grapple with. After all, abortion is said to be a women’s issue — men aren’t supposed to be involved, and they aren’t even supposed to speak out against it, much less fight. And when men try to talk openly about how abortion has negatively affected them, they are often silenced.

Eminem’s song “River” and the music video are helping to bring awareness to a very real issue, and that is the fact that abortion affects men, too.

Author’s Note: If you are a father struggling with post-abortion grief, there are resources that can help you, such as Silent No More, Healing After Abortion, Rachel’s Vineyard, or a local pregnancy resource center for help. If you are the father of a preborn child you are trying to save from abortion, check out this resource. You can also look into Abortion Pill Reversal or call 1-877-558-0333 if you need information about possible abortion reversal soon after an abortion has begun and the mother regrets it. Stand Up Girl and Pregnancy Line can also give information for men or women, and have the ability to text, call, email, or chat.