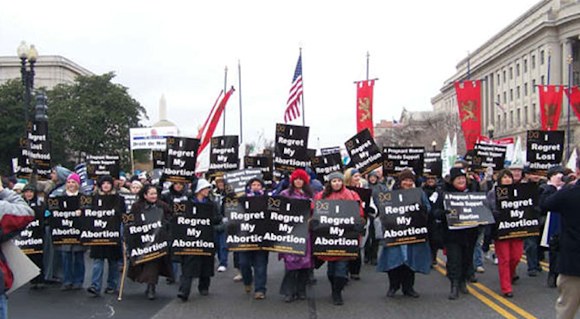 During the recent March for Life 2014, for the first time Kevin Burke, leader of Silent No More’s Fatherhood Forever Initiative read a testimony from a male inmate who regrets his abortion.

Silent No More Awareness campaign is discovering that abortion can play a role in a man’s descent into criminal activity. The proof of this is found in the stories of inmates from a maximum correctional facility in Florida. The abortion recovery program Rachel’s Vineyard is being offered to men at the Martin Correctional Institution. The Diocese of Palm Beach who offered the program has done it for the men who feel they need healing for the role they played in an abortion.

Kevin previously shared these words about the man’s powerful story:

“I had the opportunity earlier this month to spend time with some of the inmates who are involved in Rachel’s Vineyard in Florida, and I saw with my own eyes the transformation taking place within the prison walls. “When 100 inmates were asked if they had ever played a role in an abortion, and if it affected their lives, an astonishing 90 percent said yes. This speaks volumes about how abortion is affecting our whole society.”

“It takes an amazing amount of courage and commitment for these post-abortive women and men to stand up in front of hundreds of thousands of pro-life advocates to say ‘I regret my abortion,’ or ‘I regret my lost fatherhood,’ but they have been doing it every year since 2003. “They do it because they want people to know the truth about abortion. They are the voice of experience.”

Silent No More Awareness campaign is a joint project of Anglicans for Life and Priests for life which allows men and women to publicly share their experiences with abortion. Like the name implies this organization empowers post-abortive women and men who’ve played a role in abortion to raise their voices on this issue. Silent No More seeks to expose the secrecy surrounding abortion and remove the silence that hides the physical and emotional pain that accompanies the act.

Since the first Silent No More campaign on November 11, 2002 there have been 1,325 gatherings in 48 states and 17 countries. Close to 6,000 men and women have openly shared their stories in regards to abortion. Just in the last four years alone these stories have been shared a 72 high schools and universities. The campaign reaches out into the world wide web with over 2,000 stories on the Campaign website, almost 300 videos and 14,970 people registered in 77 countries. Those numbers alone from just one organization should prove to us that “post abortion syndrome” is a real issue for countless people.

One of the most powerful sayings from the Silent No More Awareness campaign is, “Men regret their lost fatherhood.” It’s hard to even read the stories fathers share on their website. The pain resonates from their words.

I passively left the decision up to my girlfriend…

We aborted twin boys. I had to drop her off early in the morning/early afternoon and pick her up hours later in the dark of winter.,.

My life was and is a shambles. The older I get the worse the loss feels, the larger the void.
To believe in this living is just a hard way to go.

What I should have done, was protect her and my child. The short period of relief, that I experienced at not having to deal with the responsibility of a child was replaced with the loss of a lifetime that I can’t undo, and a life that never had a chance to be. All these years later I have been blessed with two beautiful children that I had no right to expect. Yet, even now, I cannot watch them play and grow without thinking of my lost child.

I’m heartbroken for the men who’ve lost children because of abortion. I’m grateful for the brave souls who refuse to stay silent and let the world know they truly do regret lost fatherhood. I hope more men will come out from the veil of secrecy and receive healing for their post abortive pain. If your a man or women who has a story to share about your abortion contact Silent No More to express your regret.